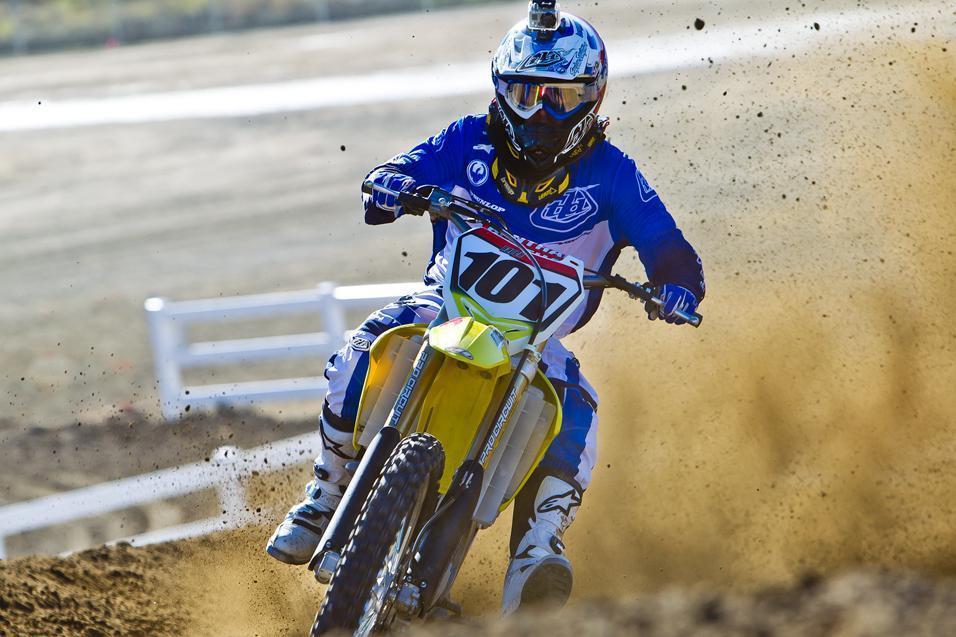 I read Josh Hill's interview on Racer X online and he said he went out after his first tryout with RCH Racing and bought a bike to practice on for his next tryout the following week. That made me wonder if most riders in the off-season that are not signed to a team have a personal bike to ride or train on. To me it sounds kind of crazy for a rider to not invest in himself. I mean if I am a ditch digger and was not resigned by my previous employer, it most likely means I can improve on my ditch digging skills. So I would surely go out and buy a shovel and be practicing my skills so I will be as prepared as possible for my next job opportunity. I understand a shovel is only $40 and a bike is around $8000, but it is relative because a ditch digger is going to make $9 an hour while a contract for a racer can easily be six figures. Also, once a rider signs a new contract he can always sell the bike. Throw a couple autographed jerseys in and I am sure someone will pay $5000 for a bike that is only a few months old. All said a rider might invest $3000 to potentially make six figures, sounds like a no-brainer investment to me.

Bill,
The guys who are serious about their careers go out and get a bike. But you would be surprised at how many stubborn riders simply refuse to make that investment. They would rather give up a couple months of riding than swallow their pride and go to a dealership and put down some cash. The flipside to that is that not all of these guys are making six figures. Take Chris Blose for example. Chris is a great rider and a nice guy who regularly makes the 450 class main events and yet he can’t find a good ride right now. Forget six figures… Chris would be stoked if he had someone paying his expenses and bills so he can focus on racing. In the meantime he went out and bought himself a Honda [2007 vintage] to ride until he can line something up. In Hill's case, he went out and bought the Suzuki to get used to that specific bike--he might still have one of his old Kawasakis or Yamahas around, but that's not going to help when trying to adapt to a Suzuki in a weekend. I applaud Hill and Blose for their commitment to their jobs.

We're living in a great time in human history. We have such advances in technology that transcends in to all aspects of our lives, including motocross. As a consumer in this industry, I'm always excited to see the advances each manufacturer will bring as new models arrive each year. As far as bikes go, we (us non-pro's) really can't go wrong with any model currently available out there. Where am I going with this? Well, I recently received a new tablet (just one non-moto example of these advances) and downloaded what is one of my favorite movies that you've more than likely seen - On Any Sunday. Man, watching those poor souls ride through whoops with their rear ends swapping back and forth is almost comical. Remember the gear these guys were wearing? Football facemasks on motorcycle helmets? Really? We all know that necessity is the mother of invention and I can't help but send all of these creative souls a sincere thanks for what I ride and protect myself with today. These guys were studs! Malcolm lapping everyone at the Elsinore Grand Prix three times on that prehistoric bike was awesome. Anyhoo, to anyone that hasn't seen the movie recently, or at all, do yourself a favor and enjoy it, again, if necessary. While watching this movie, I kept hitting rewind so many times just to confirm what these guys were trying to do...masking tape to hold ONE tear-off to the face shield on an open face helmet? Amazing! This video is a must-see for anyone that enjoys two-wheels.  The evolution of suspension gets my vote for best dirt bike advancement over the years. What's yours?  I really enjoy your column and it’s the first thing I read on the crapper on Fridays.

Still Dizzy,
A great time in human history? Hmmm. Maybe I’m still suffering from some post-election day hangover but I’m not sure I agree with you on that. Sure, our technology is powering forward so I can send emails from the toilet on my phone and buy a car that will literally park itself. That is fantastic innovation, especially if you eat a lot of Thai food or you have a wife who crashes into things like Lindsay Lohan on a coke bender. But socially I’d rather go back to the days when On Any Sunday was filmed. Common sense and common decency have become obsolete, people are smoking dope on the streets of Denver and my taxes just went way, way up… again. I’d get in my truck and go for a drive to calm myself down but gas is $4.00 per gallon. I really hope I’m just overreacting to the direction this country is heading and the speed it’s moving.

As far as bikes go there is no question we’ve come a long, long way. I’ve raced a couple of vintage events and wrestled with the obese monstrosities that were considered the best bikes made back in the sixties and seventies. I came away with a newfound appreciation for the riders from those eras. Respect. Suspension evolution is incredible but I would put brakes and durability right there with it in terms of biggest improvements. Oh, and On Any Sunday is still the best moto movie ever made and if you haven’t seen it you can’t consider yourself a true motocross fan.

You are quite funny at times and I enjoy reading your take on the motorcycle industry as a whole.   I grew up riding and racing motorcycles since age 4 and retired at 15.  Figured I should go to college instead of breaking the rest of my bones and end up wearing a straight bill hat with my ears tucked under at age 42.   I raced in the old NMA national series and what was the biggest event back then, Ponca City, every year from age 6 on.  There were no four strokes at the time and my last bike I raced was a Honda CR 125 at the Mammoth Motocross in 1989 I believe.  Pretty much the last time I put a leg over a bike.

My question is, how can Dungey at the MEC race competitively stuck in 2nd gear the entire race.  That tells me these machines are so vastly different than having to shift and use a clutch constantly as we did on two strokes.  If you came into a corner, out of a corner, hit whoops, didn’t shift up or in the wrong gear on a straight, twenty people passed you.  To me, there was a lot of skill required to ride a two stroke fast, but these four strokes seem to almost ride themselves.  No one had said one word about this, but maybe if I can ride my factory Italjet with one gear around the track, perhaps I should get back out there.

Kevin,
I’m trying to come up with an analogy to help you understand how much things have changed since 1989. An ’89 CR 125 compared to a modern bike is like a horse and plow compared to a combine. No, too agricultural. Its like you were sending a message by carrier pigeon and now you have email. Nah, too techy. Okay, remember when you used to sit in your room listening to a cassette of Run DMC while playing Super Mario Bros on Nintendo? Well, now you own your own house, rap is called hip hop and its about drugs, drinking and fornicating and you play Halo 4 with people from all around the world on a massive flat screen television.
Here’s what I’m trying to say: Over the years since you left the sport has changed exponentially. The tracks and the sponsors and the formats have all undergone adjustments but the bikes have to be the single biggest change. Even the advancement in two-stroke technology since ’89 was huge. If you jumped on a new KTM or Yamaha 125 you would think you were riding a works bike. And if you threw a leg over a new 450 you would need a change of shorts. The power is manageable and strong and it starts at a crazy low RPM and revs to the moon. They turn better, handle better and last longer than anything you are used to and the fact that Dungey could even clear all the jumps at the MEC in second gear should tell you something. Sounds like its time for you to find your testicles and get back into the sport. You do make a lot of money now, right?