Crawfordsville, Ind. - After three full-hours of intensity and turmoil, Factory FMF/KTM's Charlie Mullins secured his first win of the 2012 Can-Am Grand National Cross Country season at Sunday's Amsoil Ironman GNCC. The penultimate round, held in Crawfordsville, Ind., could not have set up a better championship scenario as only one point separates both the XC1 and XC2 title contenders with one round remaining in the 13-race tour.

Coming into Round 12, AmPro Yamaha's Paul Whibley had a four-point lead over FMF/KTM's Kailub Russell in the XC1 Pro class, but the infamous Ironman obstacles caused each of the front-runners to experience their own struggles all afternoon. Whibley ultimately posted his worst finish of the year in fifth, while Russell salvaged a podium finish after experiencing several crashes throughout the day.

"I was last coming off the line and ran into Jordan Ashburn and crashed in the third turn," Russell explained. "I stopped in the woods to straighten my bars on the first lap and after that I decided to ride like a novice the rest of the day. I just kept plugging away and got on the podium, which I'm happy about." 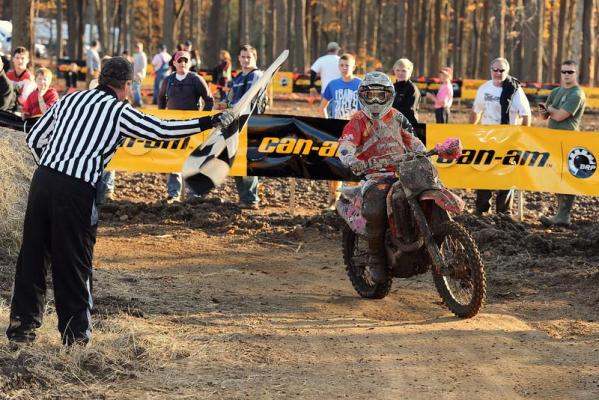 Whibley's afternoon began on par as he once again grabbed the $250 Motosport.com Holeshot Award and led the stacked field early on. However, it was Shenandoah Honda/Offroadchampion's Thad DuVall who took over the reigns on the opening lap with Whibley and Obermeyer Yamaha-backed Chris Bach close in tow. The FMF/KTM duo got off to a dead last start but both riders quickly made up time to pressure DuVall for the early lead.

Things continued to go sour for Russell on Lap 2 as he sustained a series of crashes that pushed him as far back as eighth place at times. Russell was able to pull himself together as he began to put a charge on the leaders midway through the race. In the meantime, Mullins took the lead from DuVall and quickly established a consistent pace out front. However, DuVall and Whibley didn't let Mullins get too far away as the duo held the pressure on and remained within seconds of the leader all day.

"Charlie, Paul and I broke away from everyone on the third lap." DuVall said. "I don't think I've ever ridden so hard in my life! I was pretty sketched out trying to keep up with those guys but it worked out because I was able to see their mistakes riding so close behind."

The lead-action was intense all afternoon, but perhaps the most excitement came after nearly two and a half hours of racing had passed. Mullins, Whibley and DuVall and were wheel-to-wheel heading into the final lap when reports came through that Whibley had run out of fuel! DuVall capitalized on Whibley's misfortune, inheriting the second place position with only a few miles to go. Russell eventually passed Whibley too, thus securing a podium position that would have otherwise belonged to his rival. 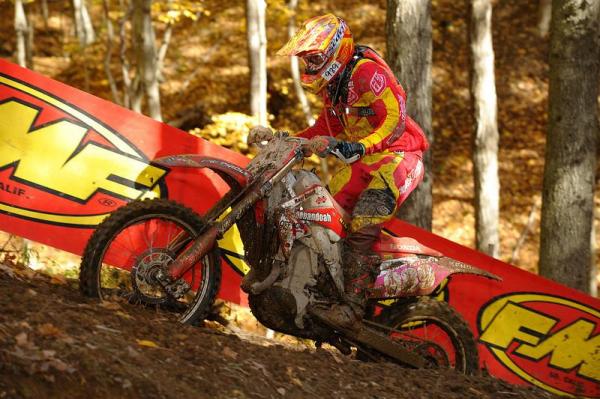 After receiving fuel from another rider on the course, Whibley rode straight through the checkers to finish in fourth place behind Russell. However, Whibley did not return to his pit for more fuel, which is a violation of GNCC Rulebook Section H - On Track Regulations:

As a result, Whibley was docked 15 seconds and one finishing position, ultimately giving him fifth place in the XC1 class.

After missing the previous round, Indiana's Chris Bach put on an impressive ride as he battled back and forth with the lead pack. Bach physically finished behind Whibley in fifth place, but chalked a season-best fourth place finish at the end of the day. AmPro Yamaha's Jordan Ashburn battled with his Yamaha counterpart Bach throughout the race, ultimately finishing sixth. WMR/KTM's Rory Mead put himself into contention in the early stages of the race but struggled with Ironman's fierce obstacles to land a seventh place finish for the day. Current JNCC champion Takeshi Koikeda took eighth, New Zealand's Adrian Smith grabbed ninth and JG Offroad/American Honda's Jimmy Jarrett rounded out the top ten.

Although Russell's third place finish wasn't desirable, Whibley's fifth was enough leverage for Russell to take over the championship points lead by one point. DuVall held strong to take second and maintain his position in the point standings. Mullins was able to stay consistent and strong in a chaotic afternoon of racing to secure his first win of the season.

"It was awesome to get a win! The track was really tough and it took a lot of energy to ride, so I was happy to see the checkers," Mullins said. "I don't know if I'll make Loretta's depending on my little boy and when he gets here, but at least I got a win this season. It feels really good." 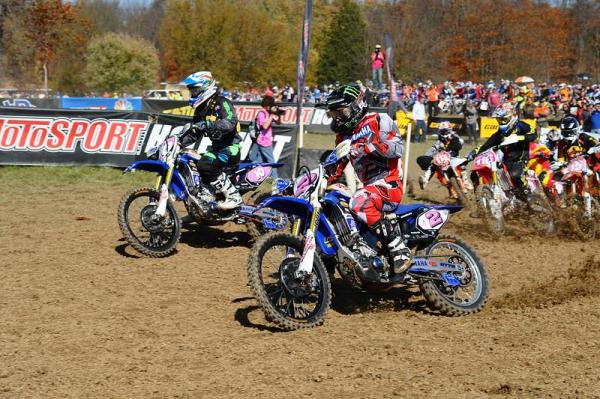 The XC2 Pro Lites championship is once again down to the wire after defending champ Steward Baylor Jr. reclaimed the points lead from KR4 Performance's Jason Thomas after taking his first win since Round 5. Not only did Baylor get a big win in the class, the young gun also finished third overall on the adjusted time clock. Baylor and Thomas switched back and forth with the lead all afternoon, creating one of the most exciting XC2 races in some time.

F.A.R Husky's Andrew Delong put in a consistent day to finish third place in the class, but it wasn't enough to keep him in the title chase. JG Offroad/American Honda's Scott Grills continues to put in solid finishes up front, grabbing his second consecutive fourth place finish. Pennsylvania's Shane Hufford Jr. rounded out the Top 5.

Indiana's Derrik Allen put on an impressive show in his home state as he took his fourth consecutive 4 Stroke A Lites class win, in addition to taking home his first-ever Top Amateur Award in front of several friends and family members. Allen battled with Open A front-runner Adam Bonneur in the early parts of the race until Bonneur had a crash where he hit his head and was forced to call it quits for the day.

Maryland's Randall Riggs claimed the morning overall podium, in addition to another Master's A (50+) class win. West Virginia's Cody Pingley took second overall for the day as he chalked the 4 Stroke C Lites class win. After securing her first-ever overall win last round, Factory FMF/KTM's Maria Forsberg followed up with another podium finish at the Ironman GNCC. 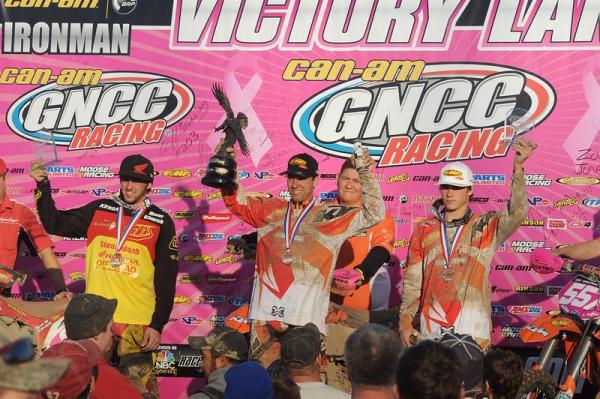 DuVall (left), Mullins (center) and Russell (right) would round out the XC1 podium.
GNCCRacing.com photo

It was Mike Witkowski (KTM) who once again claimed the Youth overall win while taking yet another Super Mini (12-13) victory in his home state of Indiana. Pennsylvania's Kaleb Ward (KAW) finished second overall with another second place finish in the (12-13) division, while Nick Johnson grabbed the Super Mini (14-15) class win and third place overall.

The 2012 Can-Am Grand National Cross Country Series returns to action November 3 and 4 for the season finale at Loretta Lynn Ranch in Hurricane Mills, Tenn., where bikes will race on Saturday and ATV's compete on Sunday. For more information, go to www.gnccracing.com. 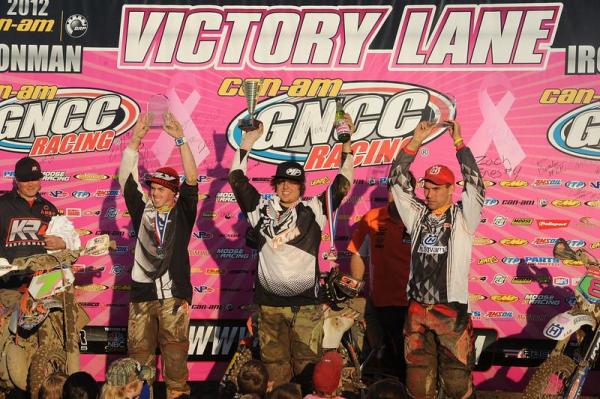