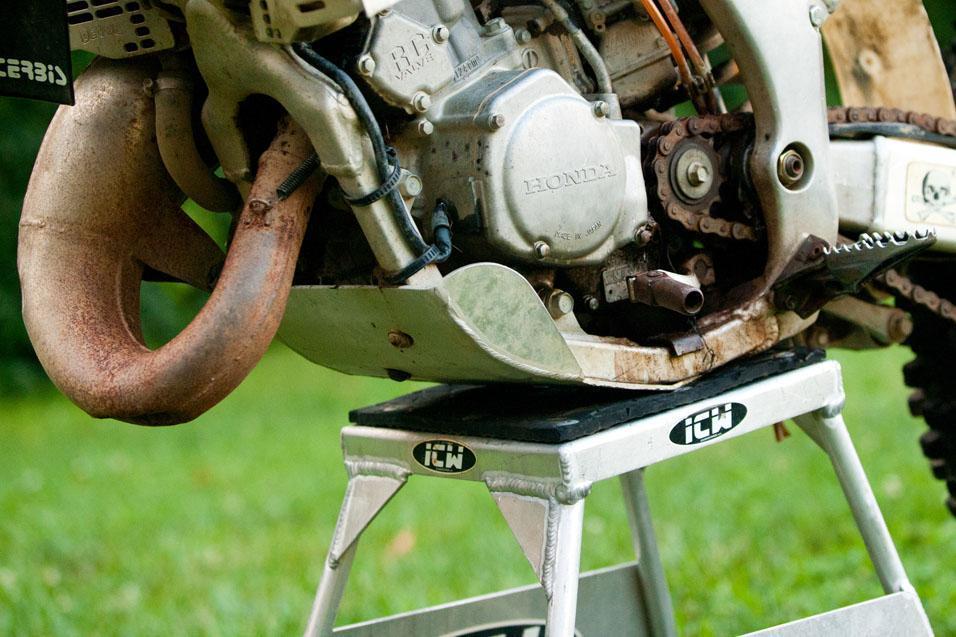 October 12, 2012 9:15am
by: Aaron Hansel
By now most of you have seen our new weekly feature in which we scour Craigslist for the funniest ads and most haggard looking bikes we can find. Judging by the number of emails we’ve received that contain links to ads selling battered beaters and hunks of twisted metal that used to be motocross bikes, many of you have even gotten into the spirit of things yourselves. So, in honor of your participation, here are a few Craigslist ads submitted by our readers. As usual, be sure to use the comments section below to tell us which ad features the best or worst purchase.

The seller begins the ad by mentioning that this is “Not the prettiest bike,” and boy is he right. In fact, he should receive some sort of award for truth in advertising with that statement. A brief glance reveals what appears to be black spray paint (a common theme found here on Cool as Hell), a missing rear fender, a brake lever angled almost completely straight down, registration that expired nearly a decade ago and a seat fashioned from plywood. But hey, at least the timber saddle is painted to match the rest of the bike, and hats off to the seller for using a renewable resource to build it. Who says dirt bikes can’t go green?

The photo of the bike itself also leaves something to be desired, although after some thought, we decided that the marginal view of the machine was part of the seller’s strategy. After all, a bike that’s covered in leaves and spiders and looks like it’s been stored outside leaning against the back of the house for the last year probably wouldn’t look any better out in the open sun. Plus, you've gotta get that wood seat angled away from the camera! Why put effort into something that may decrease your chances of a successful sale?

The Silver Lining: If it miraculously holds together, a big-bore two-stroke junker like this can provide the right buyer with hours minutes of cheap, blindingly fast straight-line entertainment at the sand dunes. The best part? You don’t even have to worry about locking it up at night.

In the last ad we mentioned that black spray paint is a common theme here, and this ad just helps prove our point. Whoever painted this beauty was definitely in a hurry, as evidenced by what looks like overspray on the seat and a lack of paint on the front fender right behind the forks. Come on, you couldn’t spare a couple minutes to remove the bodywork in order to give this tiddler a proper rattle canning? The bike is also missing a radiator cap and has what the seller describes as a “water leak in the moter.” So, the water you want in the bike comes out and the water you don't stays in! No big deal, moisture sitting in the engine internals probably isn’t that big of a deal, right?

All paint and coolant issues aside, perhaps the biggest travesty of this ad is the $1000 asking price. We couldn’t even find a Bluebook value for a KX125 this old, but we’re pretty sure the only way this hapless heap could reach a four-digit value is if you included the numbers on the right side of the decimal point.

The Silver Lining: Thanks to the spray-paint-maestro, this beast is sporting some killer black rims--that's a style trend that didn't come along until way, way after 1989. So nicely done to modernize the thing!

At first glance this bike doesn’t look that bad, but any time a motorcycle is sporting several hundred pounds of stickers, has a year’s supply of duct tape holding the seat together and is shod with knobbies that look more like street slicks, you just know there’s going to be a few gremlins hiding in there somewhere. The first issue is the missing rear brake system, which is mentioned by the seller in his description of the bike: “im selling my kdx 200 good running bike it only got front brakes interested in trades it for woods beater or car that needs a little work.”

What’s even more entertaining than that half-hearted sales pitch is the reason the bike has no rear brakes. Take a quick look at the rear wheel. It’s a little blurry so it’s difficult to tell for sure, but we’re pretty certain that the rear hub is of the drum brake variety. What’s the problem, you ask? When this bike was new, it came equipped with disc brakes! The muffler definitely isn’t stock either, although it doesn’t resemble any aftermarket mufflers of the era. Given the fact that someone has rammed a rear wheel from some other model onto this bike, it’s anyone’s guess what’s going on with the exhaust.

The Silver Lining: In keeping with the theme of black spray paint, someone has beautified this machine’s frame with a can of it. The silver lining here is that they at least had the good sense to remove the bodywork before doing so.

The entertainment from this dirty gem comes not from the bike itself, but almost entirely from the wording of the ad, which is why we’re going to let the seller do most of the talking in this entry.

“IT is a Kawasaki Kx 125 it is extremely fast..has a power band in each gear..it was built for racing... Will crank up and run without a problem..nearly brand new tires on front and back..the brakes work good some decals are peeling..but still extremely reliable... I am looking for a 4 stroke 250 but will consider other trades just let me know what you have or i will take 1000 cash”

Finally, a bike built for racing that has a power band in each gear! We can’t tell you how many bikes we’ve ridden that could have easily won shootouts if the manufacturer would have just included a power band in every gear! We’re not sure if the power bands in this machine are stock or aftermarket, but does it really matter? The important part is that it has them. IN EACH GEAR!

The Silver Lining: Unless this machine originally sported a triple-digit number and the middle number fell off somewhere, it’s running #47, which means there’s a very slight chance that this bike actually belongs to the legendary Jeff Emig.

Now it’s time for you to explain whether Plywood Perversion, Overspray, Stickers & Tape or Multiple Powerbands is the best buy.

See a bike you think would make a good fit for this column? Send an e-mail over to aaron@racerxonline.com

If you’ve been offended by anything you read here, you can also send us an email, but first, try taking a deep breath, relax, and remember, we don’t care, it’s all in good fun.