St. Clairsville, Ohio - Temperatures were a bit on the chilly side in eastern Ohio as Round 11 of the 2012 Can-Am Grand National Cross Country Series made its way to St. Clairsville, Ohio for the ITP Powerline Park GNCC. Factory FMF/KTM's Kailub Russell bounced back from a tough loss last round to secure his fifth win of the season, now sitting within four points of current points leader Paul Whibley in the championship standings.

As if cold temperatures and challenging obstacles-such as the infamous "Powerline Mud Hole" and the tricky "Rock Garden"-weren't grueling enough, scattered rainfall became yet another factor early in the three-hour afternoon race. AmPro Yamaha's Paul Whibley continued his holeshot tradition by once again grabbing the $250 Motosport.com Holeshot Award where he led the opening lap with Factory FMF/KTM teammates Kailub Russell and Charlie Mullins close behind. However, things began to turn sour for Whibley around the halfway point as the current points leader began a series of crashes that caused him to significantly lose time on the leaders as the race wore on. Since Russell was able to land his first-ever XC1 win at Powerline Park in 2011, his confidence looked to be at an all time high this weekend. 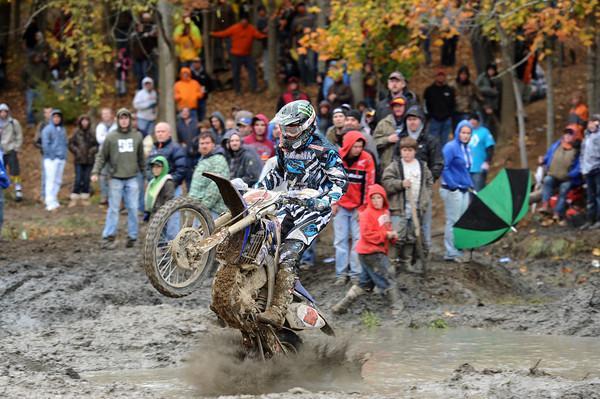 While Whibley struggled to stay off the ground, the FMF/KTM duo of Mullins and Russell continued to pull a gap on the rest of the field. Russell and Mullins swapped the lead several times throughout the 7-lap race but a couple of mistakes by Mullins on the final lap gave Russell the leeway he needed to secure his second-consecutive win in St. Clairsville. Mullins finished only one second behind his teammate in a hard-fought battle for the win, while Whibley dropped back to over three minutes behind the leaders.

"I was pretty sore after the first crash and it was kind of a salvage-points kind of day from there," Whibley said. "You can win a championship on your worst days but you can't win them if you don't finish. So if you can keep those worst days to a third place like this, then it's still a good day." 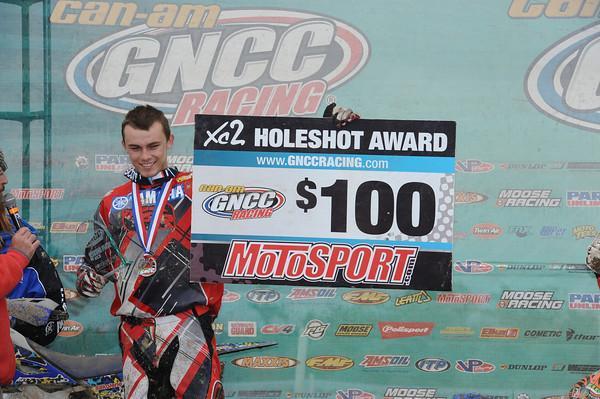 Fresh off a win at Round 10, Shenandoah Honda/Offroadchampion's Thad DuVall began the race mid-pack and swapped positions with WMR/KTM's Rory Mead as the two stayed within a few seconds of each other all afternoon. Current Japan National Cross Country Series champion Takeshi Koikeda mixed in with DuVall and Mead, putting in a valiant effort towards a top five finish. Koikeda wasn't able to make the pass, ultimately finishing just outside the top five in XC1.

Florida's Garrett Edmisten grabbed seventh place, just ahead of AmPro Yamaha's Jordan Ashburn who came in eighth after battling a broken brake pedal and several crashes throughout the afternoon. JG Offroad/American Honda's Jimmy Jarrett started off strong but eventually ran into a mechanical issue that took him out of contention at the halfway point. Jarrett's teammate Nate Kanney also experienced bad luck when he lost the bolts to his head pipe, which ultimately kept him from finishing the race as well. 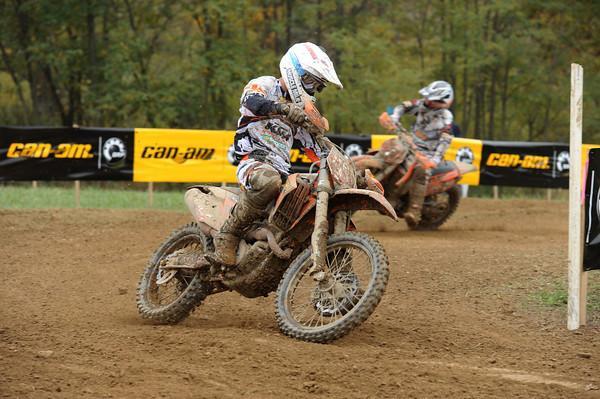 Russell and Mullins battled for the lead all day long.
GNCCRacing.com photo

With just two races remaining in the season, Whibley holds a mere four-point lead over Russell in the championship standings. However, Russell doesn't seem to feel the pressure just yet.

"I've been doing really well on rebounding after bad races this year and I'm pretty pumped on that," Russell said after his win. "I don't have any pressure on me, I can't lose second I can only win."

For the first time this season, a new leader tops the XC2 Pro Lites leader board as KR4 Performance's Jason Thomas took the reigns from defending champ Steward Baylor Jr. with his second class-win of the year. Baylor was in contention for the win for a majority of the race as he and Thomas put on an exciting battle up front all afternoon. However, Baylor got caught up in the mud hole on the final lap and lost a couple vital positions as far as championship points are concerned. 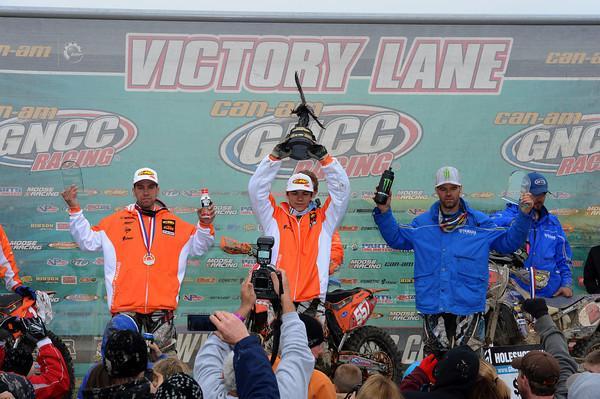 One of the biggest standout performances of the day went to Ohio's Aaron Plessinger where he first grabbed the Motosport.com Holeshot Award in his debut XC2 race, before putting in an impressive ride to finish second place in the class. F.A.R Husky's Andrew Delong salvaged a hard-fought third place finish after a day that just didn't seem to click for him. Delong had trouble firing his bike off the start, immediately putting him dead last on the opening lap. Delong eventually made his way up to third on the final lap and gained valuable points toward the championship chase. JG Offroad/American Honda's Scott Grills finished fourth for the day, just ahead of Baylor who rounded out the top five.

Thomas now holds a four-point lead over Baylor, while Delong still sits within striking distance of the title. 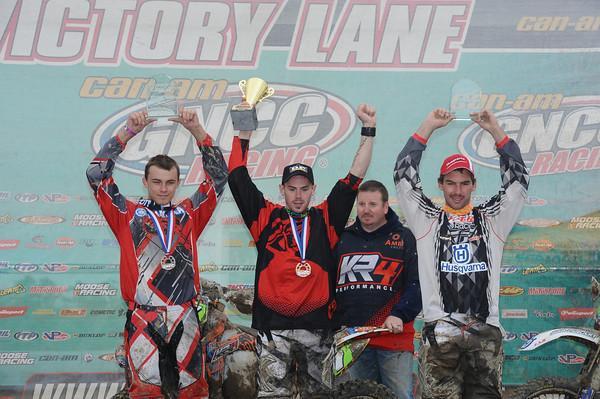 It was another all-out battle for the Top Amateur honors but once again it was 250 A winner Grant Baylor who claimed the title with seventeenth overall. West Virginia's Layne Michael led Baylor in the early stages but a massive crash in the mud hole put Michael back to third behind Mark Heresco Jr., who finished second behind Baylor in the class.

Factory FMF/KTM's Maria Forsberg added yet another personal milestone to her racing resume as she grabbed her first-ever overall win at Powerline Park. Forsberg, the recently crowned 2012 Women's class champion, topped Super Senior A (45+) winner Eric Gill by one minute on the adjusted time clock, while Master's A (50+) winner Mark Patterson rounded out the overall podium. 250 C (12-19) class winner Colin Keegen and second place in the Women's class-Becca Sheets-rounded out the top five overall, each rider earning their best overall finishes of the season. 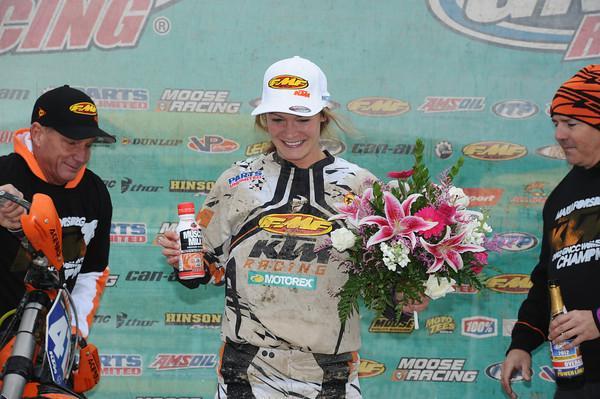 The battle for the Youth overall once again came from the usual front-runners of Mike Witkowski (KTM), Jonathan Johnson (KTM) and Cody Pingley (HON)-to name a few. Indiana's Witkowski landed the overall win, as well as the Super Mini (12-13) class-win. South Carolina's Jonathan Johnson finished second overall for the day but was able to secure the (14-15) division win, followed closely by West Virginia's Cody Pingley in third overall, second in the class. Second place in the (12-13) division went to West Virginia's Cody Ruckle, while Pennsylvania's Kaleb Ward took third in the class and both riders rounded out the top five overall.

The 2012 Can-Am Grand National Cross Country Series returns to action October 20 and 21 for the Amsoil Ironman GNCC in Crawfordsville, Ind. For more information, go to www.gnccracing.com.