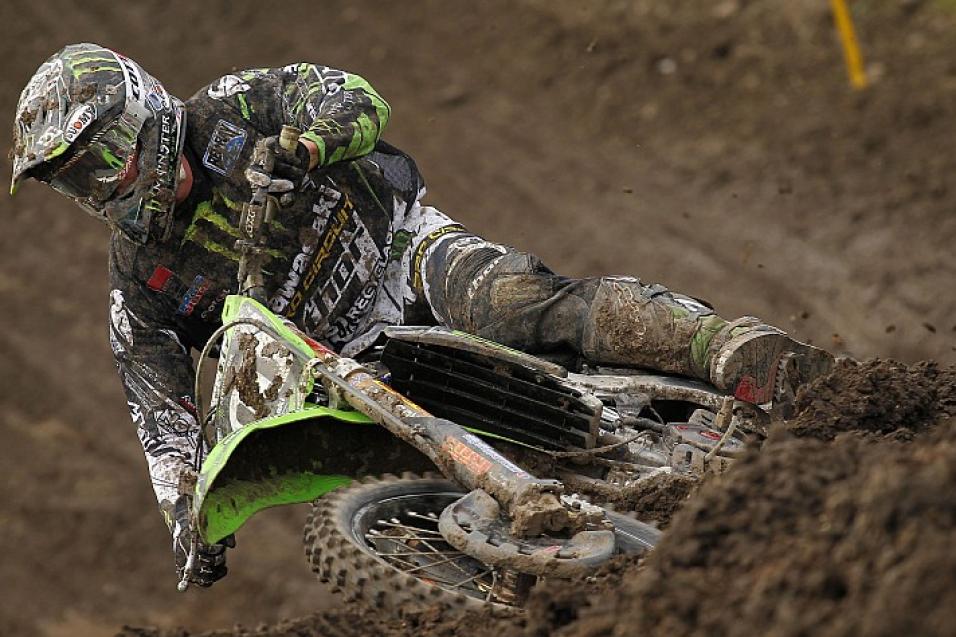 Advertisement | Advertise with Us
The MX1 and MX2 FIM Motocross World Championships had already been wrapped a fortnight before the trip to central Europe and just one week before the 66th Motocross of Nations in Belgium, so the Grand Prix of Germany was stuck in a strange sort of limbo in terms of motivation and feeling from the paddock. Third place in the MX1 Class was the only real position yet to be decided and would be sealed convincingly by factory Kawasaki Racing Team rider Gautier Paulin for a decent end to a rookie campaign. The subdued atmosphere behind the racing scenes came as a consequence of that feeling of “not much to play for,” the culmination of a long season, insecurity for some riders still to finding employment for 2013 and certain teams still unsure of their plans for the next calendar starting in March.

If the Grand Prix lacked an edge for its close proximity to the Nations (Red Bull KTM’s Jeremy van Horebeek, third in the MX2 series, did not even compete with a sore knee, having one eye on his MX2 role for Belgium at Lommel) then it was slightly ironic as Teutschenthal was changed, bigger and more modern; this Grand Prix was effectively a dress-rehearsal for their 2013 Nations slot. Across the fences it was one of the busiest and loudest (and best) events of the season – partially thanks to the Roczen-effect as the young German’s wild-card outing in MX1 must have put a fair few more numbers on the gate judging by the flag-waving fans out in force – and it was special to see how the profile and success of one rider can elevate the sport in a country. Long may it continue and hopefully spread. Similar scenes were witnessed in Russia with Evgeny Bobryshev, in Italy, UK, France and on and on. 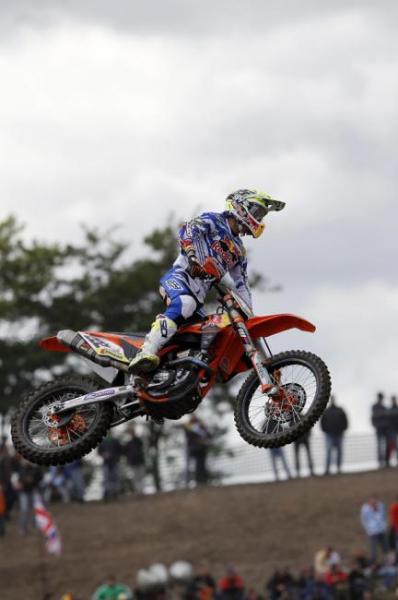 Cairoli captured his 11th overall of the season at the finale in Germany.
Ray Archer / KTMImages photo

Convincing winners across the rippling Teutschenthal hard-pack were Tony Cairoli and Tommy Searle. Cairoli has become a juggernaut of numbers in MX1. Four consecutive titles in the premier class, 11 wins in 2012 from 16 GPs, nine of which were moto doubles. Twenty-one moto chequered flags from a possible 30 including the last 14 in a row and a winning streak of seven Grand Prixs; a feat unequalled since Stefan Everts’ 14-1 season in 2006. Cairoli battered his right little finger against one of the corner banks on Saturday but the messy pinkie didn’t disrupt his flight and despite his best efforts Roczen didn’t have enough of a handle on the 450 Red Bull KTM to live in the same company as the world champion who celebrated his 27th birthday in Germany. Roczen made two mistakes (a stall and a crash) in the first moto that dropped him down to third behind Clement Desalle (the 2012 runner-up taking a tenth podium on the Rockstar Suzuki) but had the better of the Belgian in the second race and also stayed ahead of the crowd darling he has virtually displaced, Max Nagl on the other KTM for the last time. The injury-ravaged but fast German is making his final appearance in orange after an association stretching back ten years and moves to factory ‘red’ after an official press conference over the weekend.

In MX2 Searle must have wished that Teutschenthal could have come a couple of rounds previously. The Brit was omnipotent, and with world champion Jeffrey Herlings suffering a mechanical DNF in the first moto it was another of those frequent occasions in the 2012 MX2 story where the onus of the duel between the riders swung back into the other’s favour. Too late for the Floride Monster Energy Pro Circuit Kawasaki representative as Herlings had already clinched the crown at Faenza and actually cited a degree of partying and post-title “responsibilities” as the reason for training and prep disruption for Germany, and therefore a less than ideal performance. Herlings’ DNF was nothing to do with champion’s malaise however and the “0” cast the Dutchman off the podium for only third time this season. This made room for Monster Energy Yamaha duo Zach Osborne (a seasons-best second place) and Arnaud Tonus; two of the tipped racers for the 2012 crown that should have started the year on the box but both missed the opening half of the campaign with an array of broken bones. For Osborne in particular it was a sweet way to end five years of a European adventure that merges into a GEICO Honda saddle after the Virginian’s wedding in four weeks. ‘338’s’ GP chapter has not been without success. Fourth in the world in 2010 – the same year that he won the British title – represented the USA’s best on the international scene this century and he also tasted GP victory in Turkey in 2009 and claimed the Marty Moates Cup in the Glen Helen Grand Prix. 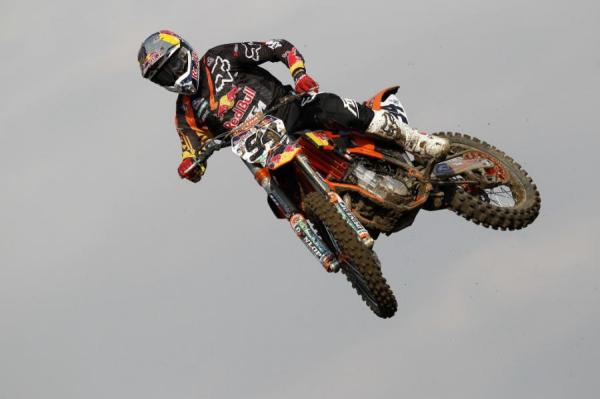 Ken Roczen made his return to the GPs and finished second behind Cairoli.
Ray Archer / KTMImages photo

“It is tougher than I thought it would be to leave,” he said. “It is good to sign off with a podium and I have a lot of memories. The win in Turkey was a turning point in my career and this GP spell has filled a quarter of my life. It has been a great experience and for sure this is not a final goodbye.”

The Monster Energy Yamaha MX2 team results were also a fitting mini-tribute to missing Team Manager Steve Dixon who had been hospitalised with three ruptured spinal discs in Germany and needed an operation while his riders were circulating in the top three. A thought must be spared for Britain’s Jake Nicholls – the perennial fourth-place man - who just missed out on his maiden trophy courtesy of the second moto order and the UK is looking fairly prosperous in the category with HM Plant KTM UK’s Elliott Banks Browne entering the leader’s circle (only a mechanic problem robbed a possible third place in the first race and in the second moto he fried his clutch) and 2012 European Champion Mel Pocock set to renter the fray in 2013. Something has to be done about the continued influx of promising talent from France with Jordan Lacan the latest teenage debutant in the mould of Marvin Musquin to catch the eye with a run to 13th in the second moto. Lacan will line-up with the likes of Ferrandis, Desprey, Teillet and Tixier in 2013 as the next Gallic generation evolves.

Could this be Christophe Pourcel’s last Grand Prix for the near future? Unbelievably for a rider of CP377’s ability he remains on a hovering list of so-far-unsigned talent that includes Shaun Simpson, Xavier Boog, David Philippaerts (although Italy’s first MX1 champion is believed to have a Honda satellite saddle for next year), Rui Goncalves and the Frenchman’s brother Seb. With the distraction of racing out of the way for most of the unhitched gaggle, you’d have to imagine that telephones will be busier than usual this week. 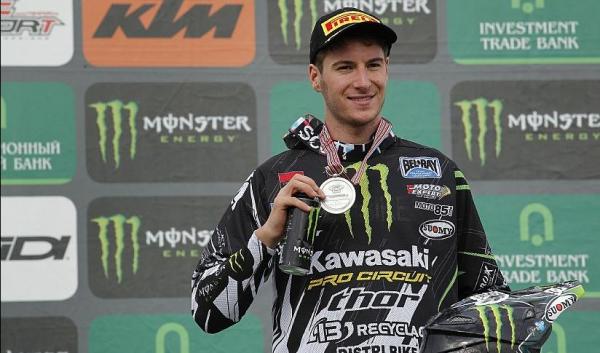 Tommy Searle went 1-1 for the overall in his final MX2 race of his career.
Kawasaki photo

Teutschenthal was the stage for Livia Lancelot’s second win of the season in the FIM Women’s series with Lake Elsinore victor and world champ Kiara Fontanesi sidelined after a heavy crash in Italy the previous week, and Mattias Walkner was crowned MX3 World Champion for the official support series.

Cairoli, Desalle, Nagl, de Dycker, Paulin, Bobryshev, Boog, Herlings, Searle, van Horebeek, Osborne, Tonus and more are just some of the names that won’t be thinking about holidays or abandoning the training routines this week for obvious reasons. Although the drive across Germany to Belgium is relatively short, for many who will now turn their attention towards the 66th edition of the traditional season curtain-closer the week will be tight as the Lommel sand looms. 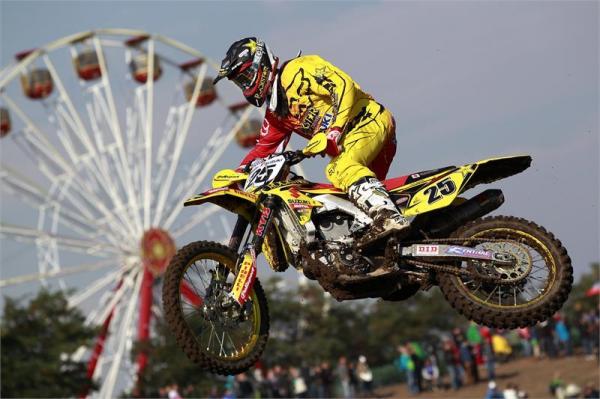 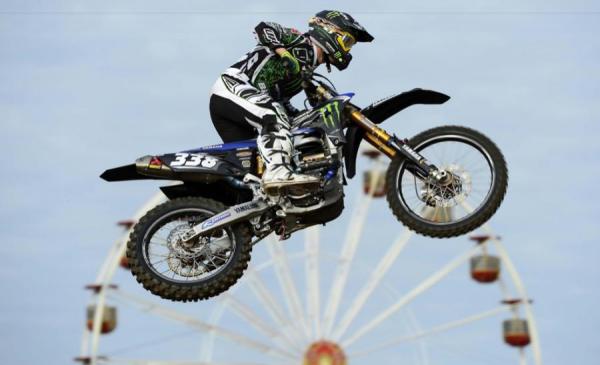