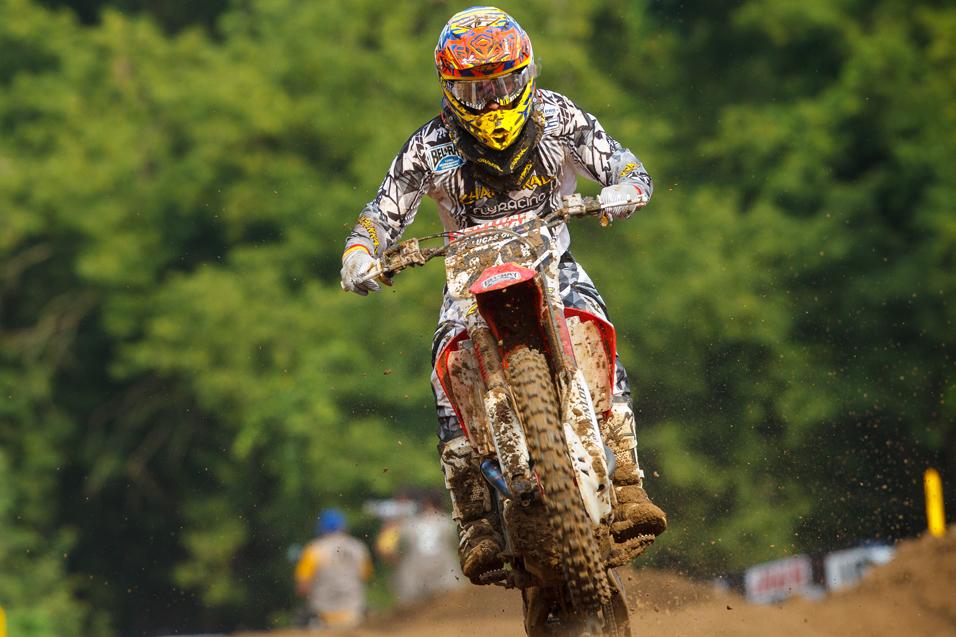 August 24, 2012 10:30am
by: Chase Stallo
Delmont, PA Steel City AMA Pro Motocross Championship
Ryan Dungey has the 450 title locked up. Blake Baggett has stabilized the points lead in the once-turbulent 250 Class. What's left to fight for in the final four motos of the season? Check out these points battles you might have missed—no doubt the riders in these fights are still plenty motivated.

Assuming the GEICO Honda pair of Justin Barcia (24 points back of series leader Blake Baggett) and Eli Tomac (28 back of Baggett) and the resurgent Ken Roczen (49 back of Baggett) can't reel in the ever-consistent Baggett, the battle for bridesmaid is still very much up in the air.

After an unlikely overall at Washougal—a track Barcia has struggled with in the past—that cut Baggett’s lead to eleven, and with the championship heading to Southwick and Unadilla, where Barcia was a heavy favorite, a dog fight to the finish looked to be on the horizon. Two disappointing performances later and Baggett is in the distance, while Barcia is left fending off a red-hot Tomac.

Entering round nine of the championship at Southwick, Barcia held a 21-point lead over Tomac and a 39-point gap over Roczen. Now, after two seventh places finishes in the last four motos (until then, Barcia had not finished a moto out of the top five), Barcia is only four points clear of Tomac and 27 of Roczen. And after watching Tomac track him down and then disappear in the second moto at Unadilla—one of Barcia’s home tracks—there's no doubt which GEICO Honda rider has the momentum now. The real question: is there time for either of them to catch Baggett? 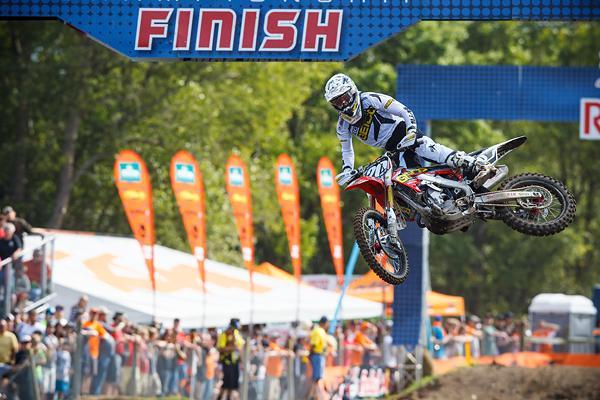 The next two rounds are crucial for Barcia.
Simon Cudby photo

Podium Positioning: Third place in 450 Class
Andrew Short (311 points) vs. Jake Weimer (293) vs. Broc Tickle (293).
Points available: 100
Monster Energy Kawasaki’s Jake Weimer has free fallen down the points ladder during the last two rounds. Not long ago Weimer still had hopes of overtaking Mike Alessi for second in points—Weimer trailed Alessi by just 12 points after Millville. But Washougal was only so-so for the Idaho rider, and Southwick and Unadilla were downright disasters, so much so that Weimer now sits a whopping 74 points behind Alessi even though Mike suffered a DNF in a moto at Unadilla!

Compounding matters, the sizzling duo of Andrew Short and Broc Tickle pounced on the chance to grab valuable championship points. Weimer held a 33-point cushion over Short before Southwick and 40 over Tickle. But after scoring just 13 total points over the last four motos Weimer finds himself in an 18-point hole to Short and tied with Tickle for fourth.

Both Short, with two podiums in the last three rounds, and Tickle, with back-to-back podiums, are scorching hot right now and with only two rounds left Weimer must rebound quickly if he has any hope of capturing third in points. By the way, you have to figure Tickle and his Pro Circuit team would like to top the factory Kawi squad in points, so the two-round showdown is on. 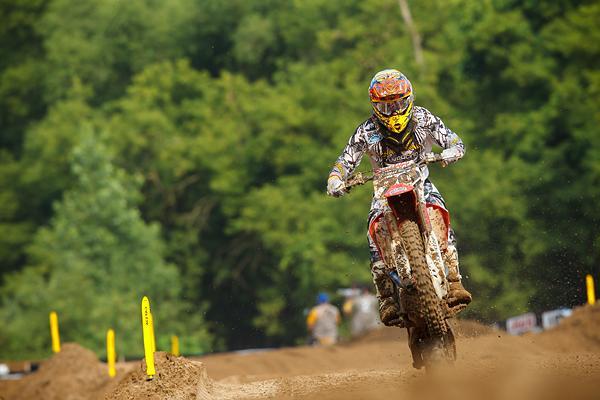 Short has charged into third in points, can he hang on?
Simon Cudby photo

Inter-squad Showdown: Seventh in 250 Class
Blake Wharton (215 points) vs. Jason Anderson (206).
Points available: 100
This battle was non-existent two rounds ago as Wharton held a 33-point lead over Anderson entering Southwick. Heck, this battle was non-existent until the second moto at Unadilla when Wharton suffered a DNF after a big crash. Wharton has failed to score points in two of the last four motos (moto two at Southwick and Unadilla), but thanks to a fourth in moto one at Unadilla has managed to hold Anderson at bay. This battle seems likely to come down to the wire as the both have an average finish ranging in the high 11 and low 12. 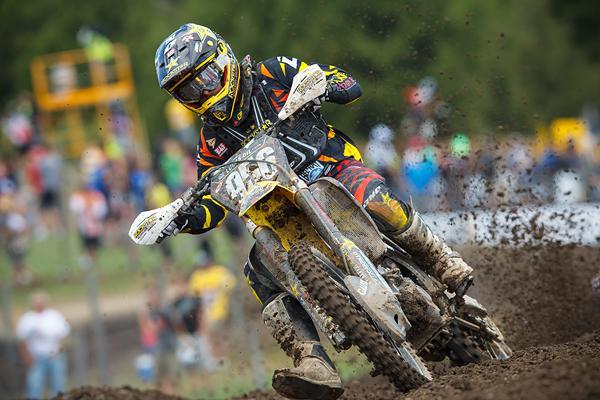 Top Ten Stardom: Tenth place in 250 Class
Travis Baker (168 points) vs. Jake Canada (149).
Points available: 100
MotoConcepts’ Jake Canada has been one of the brightest spots of 2012. In the midst of a career-best season, just two rounds ago Canada was on the cusp of breaking into the top ten in points as he trailed the Lucas Oil Troy Lee Designs Honda duo of Jessy Nelson and Travis Baker by ten and two points for ninth and tenth, respectively. But Canada threw up a double goose egg at Southwick—due to mechanical problems—and lost 26 points to Nelson and 22 to Baker.

Catching Nelson for ninth seems improbable at the time, as Canada sits 40 points back, but Baker is still within his grasp, just 19 points ahead. No doubt the drive to "be top ten" will push these riders over the final four motos. 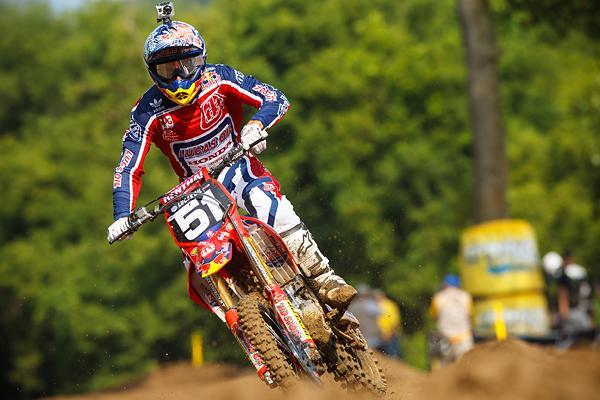 Top Ten Stardom Part II: Tenth place in 450 Class
Nico Izzi (123 points) vs. Idled Stars.
Points available: 100
After a few turbulent seasons on and off the track, Star-Valli Rockstar Yamaha’s Nico Izzi has breathed life back into a once dying career. Although Izzi has missed four rounds due to injury, he still has a chance to finish inside the top ten in points in his rookie 450 season. With James Stewart (163, 9th), Brett Metcalfe (142, 11th) and Michael Byrne (138, 12th) all out for the season and Davi Millsaps destined to take over ninth in points—thirteen back of Stewart—Izzi will need to score 40 points over the next two rounds to move from 13th to 10th. Izzi only needs to average 10 points a moto over the last four rounds, and he has averaged 11 points per moto so far. Izzi just needs to stay the course to secure an elusive spot inside the top ten. 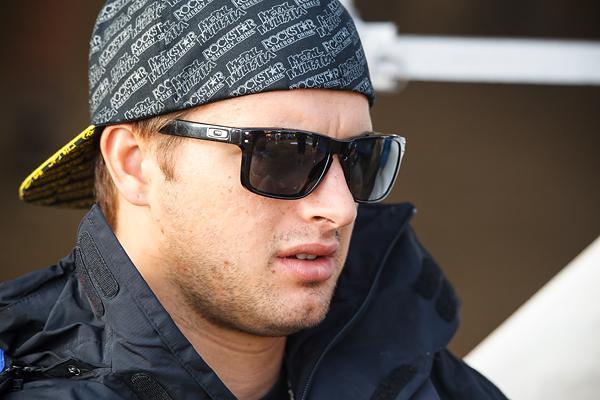