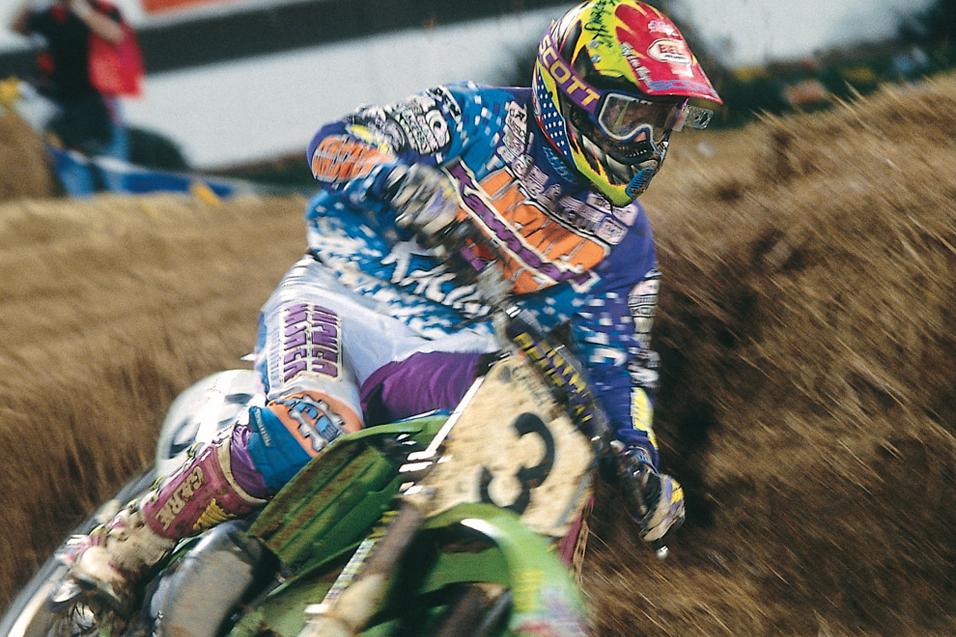 Still don’t believe us that Mike Kiedrowski was one of the most underrated motocrosser’s ever? Well, we polled a few big names in the sport and came away with these quotes about Mike as a person and as a rider.

“I rode with him a lot back in the day and I think he was underrated. I would agree with that. Mike was a very strong competitor and I think he was under looked because he wasn’t real flashy or controversial. You know the guys that do stuff off the track or are flashy, that stands out in peoples minds. People remember Guy Cooper to this day because of the way he rode and all that but Mike’s got more wins than Guy. Mike was one of the most serious and strong competitors out there. He was very reliable and not flaky at all, very hard working. When you’d talk to Mike, we could talk on a Tuesday and make plans for 8:30AM on a Friday and then at 8:29AM, he’d be there.

One of the stories I have, I dislocated my hip out in the middle of nowhere and I cartwheeled. I couldn’t get comfortable and Mike put his helmet under my knee and went and called a helicopter from back out where we parked. You could always count on Mike and he was a great, great rider.”

“Mike was a great rider to have on the team and to race against. It’s funny that you called me because I was just watching the 1990 USGP from Unadilla and it was a three-moto format. The first moto he passed me and was gone, just checked out. The next two motos, you didn’t see him. When he was on, he was untouchable that day. He was very good outdoors and I remember when he was on that Honda 125, he was fast. The bike was great and he rode it really, really good. I thought he was a little better on the Honda to be honest. Great outdoors rider. He worked hard and for me, he was like me in that he might have lacked some talent but made up for it with hard work. He hung out with Kehoe up there in the valley and they worked hard.

He came from a great family, his dad was a hard worker and I enjoyed racing with him. He was aggressive and you couldn’t trust him all the time [laughs]. I think that GP comes to mind because I just watched it. He could ride the 500 really well also. On some days, he would be gone and none of us could touch him. There was no lack of effort or trying on his part.

I do agree that he was underrated by the fans, he’s not around now and left the sport probably a little early. He went into the off-road stuff and won some races there. But because he’s not around as much, he gets forgotten, that’s kind of how it goes unfortunately.”

“There’s no way that Mike gets the attention that he should. Just the fact that you’re bringing up the fact that he was a four-time motocross champion but he’s never brought up when you’re talking about my name, or O’Mara’s or Bailey’s. He should be, he was the guy always in the mix outdoors and maybe he didn’t win a ton of races but he always screwed up your results! He did that to me a lot where he would be sneaky fast. He was like a Stanton where if he got a start, he was going to be there the whole moto. He would just wear you out. It was unfortunate for him that there was a guy who would come in and would get more hype or be a bit faster. Then people would focus on him but Mike would always be there for the title and get some wins. I don’t know why he’s not mentioned more to be honest.

He’s a worker, he’s like Stanton in where he wasn’t flashy but as a former rider and a guy that’s been there, I respect him very much. It didn’t come easy, he didn’t take the easy route and he worked at it. He was also always there for his sponsors and signings and things like that. This is a rider that every team should look for and want to have on their team. And he won Daytona three times which is something that I could never do and a track you had to be on your game to do well. He was a great teammate, we got along great and we could always talk about training together where all my old teammates that was the last thing I could talk about with them. Other than O’Mara that is. Mike was a very good rider.”

“I got to work with Mike quite a bit during his second career, racing the GNCC Series for Suzuki factory off-road. But his GNCC career mirrored his moto career in so many ways. First, Mike was as nice as any rider I've ever met. Second, he really should have been the biggest star in the series. He had more success at higher profile racing than anyone else, so he had a name, and he rode for Suzuki, which was the top team at the time. And yet, for some reason, Mike was never the first person anyone bench raced about. He started out pretty slow on the 300 pound-ish DR-Z400, but once he got on the RM250 he became a consistent podium guy, he would lead laps, he battled for wins. But you never heard constant, "When will Mike win one?" chatter. It seemed like the attention went to others--his teammate Rodney Smith, rival Yamaha riders Barry Hawk and Jason Raines, Mike Lafferty, Shane Watts.... Mike won a few WORCS titles but never got a GNCC win. He was close so many times, but to me it looked a lot like his supercross career. He was consistent and solid, but when the time came to just balls-out pin it or win it, he never quite did. Maybe it was that riding style--consistent and never crazy--that kept the attention off of him?

A few years after he was done with the GNCCs, I saw Mike at Anaheim 1. There was crazy hype in the building, of course, and I think it's tough for a lot of retired stars to deal with that. All of the attention that used to be on them is now elsewhere. Mike saw it totally different. I asked him if he missed it, and he said, "No, not really."

I've always said there are two types of top racers: those that just want to race, and then have to deal with the fame that comes with it, and those that actually want to be stars. Mike was definitely in the first category. Nothing wrong with that.”