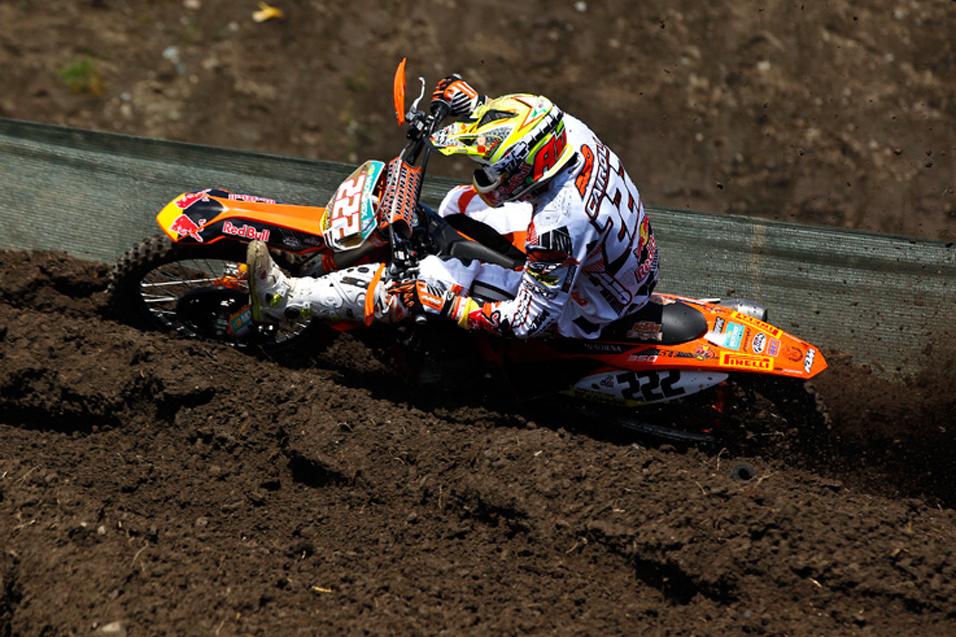 Advertisement | Advertise with Us
The free-wheeling FIM Motocross World Championship locked on the brakes at the halfway point in Belgium with Tony Cairoli extending his MX1 advantage to almost an entire Grand Prix with eight left on the calendar thanks to his fourth win. Tommy Searle bagged his third victory of 2012 to further tighten the lonely vice of pressure between the Brit and Jeffrey Herlings for the MX2 crown.

Bastogne filled one of the two vacant slots on the Grand Prix schedule that were still "To Be Determined" as the season drew near. The relatively short lead-time meant a vast turnaround of work for the organizers to prepare the venue. There was a feeling of “going back in time” at Bastogne both for the grassy paddock and the old school nature of the flowing, tree-lined track. The dark black mud only added to the sense of motocross back in the day.

After all the drama and upheaval in Portugal (and a correct but dramatic public vow of ‘zero tolerance’ to any further misdemeanours by the FIM) there was a muted atmosphere in Bastogne, not helped by the truly miserable weather on Saturday that brought a shower of rain practically every hour and coated the one circuit on the calendar that perhaps couldn’t handle it. After all the rain, passers by in the paddock felt like they were walking on banana skins through the mud, but the over-generous dose of water on Saturday – forcing the qualification heats to be cancelled – was a key element in the creation of the best surface of the year on Sunday so far with the soft dirt offering plenty of options and racing lines. 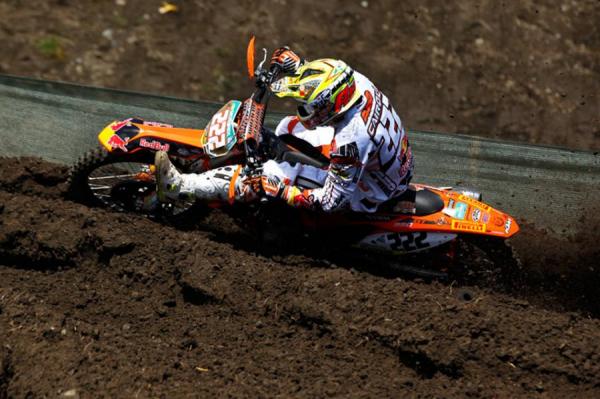 Elder generations and fans of Belgian Grand Prix's have had to suffer the sight of a small Sicilian teaching lessons in sand riding to the world’s best over the last few editions at Lommel, and Cairoli – who bases himself in Belgium for stretches of the year and whose girlfriend, Jill, is Dutch – was in no mood to lower his shock value. The Red Bull KTM World Champion was immense at Bastogne to go 1-1 and effectively dealt with the renewed vigour of Rockstar Energy Suzuki’s Clement Desalle at his home event (2nd overall) and CP377 Monster Energy Pro Circuit Kawasaki’s Christophe Pourcel (3rd) who nailed two good starts and was predictably fast where trajectories and rider expression were the orders of the day. “The track was awesome,” he said. “We had a lot of lines and we could pass and be aggressive, going inside or outside was good.”

Desalle had faced a lot of attention in the build-up to the first GP in his French-speaking side of Belgium for five years and according to some media colleagues didn’t handle it in the best way, but the Portuguese GP winner gave the 18,000 attendance good value for their money. In the MX1 class HM Plant KTM UK’s Kevin Strijbos proved there is still energy in the old muscles with a dogged fourth position. The former double championship runner-up is pouring scorn on the doubters that the KTM 350SX-F was the wrong move for ‘The Kid’. Honda World Motocross Team’s Rui Goncalves rode to fifteenth with a broken rib from Saturday that left him visibly barely able to talk through pain and Cairoli’s teammate Ken De Dycker kept his section of the crowd content with charges through to sixth overall despite an opening moto first turn crash. Kawasaki Racing Team’s Gautier Paulin made a terrible start in the second race and also slid to the ground on one of the fast and rutted open corners at the back of the circuit. The French MX1 rookie placed fifth. 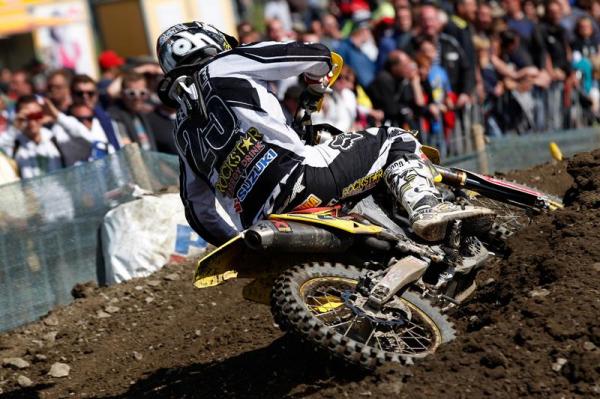 In MX2, the Searle-Herlings axis was unmovable from first position. There was a hint of another duel to the line in the first moto when Searle crunched a four second deficit to find the rear wheel of the KTM, but in what he described as almost a big crash, he lost sight of Herlings in a single lap. Herlings took the win, clearly not too affected by his pantomime role as villain in the past fortnight. Searle was faultless and measured in the second moto to keep the Dutchman at bay and Jeremy Van Horebeek won the mini Belgian contest against Searle’s Kawasaki teammate Joel Roelants for third. Monster Energy Yamaha’s Arnaud Tonus found good speed to finish fourth on his twenty-first birthday after a pair of mediocre starts and Max Anstie suffered an electrical problem on the warm-up lap of the first moto and then retired with further trouble in the second.

Off the track, Ryan Villopoto’s presence at what was his first glimpse of a Grand Prix gathered the predictable amount of attention and led to the supercross champion allegedly paying lip service to a term racing the series in the not too distant future. Whether Villopoto, Dean Wilson or any other AMA star fancies the challenge of trying to win a world title the fact remains that several riders have left Europe and managed to succeed on American shores but there have not been too many exports that have shown the Grand Prix campaigners the fastest route, certainly from the last generation. It is an interesting quandary that might just catch the fancy of an individual who has won all there is to claim in the U.S. 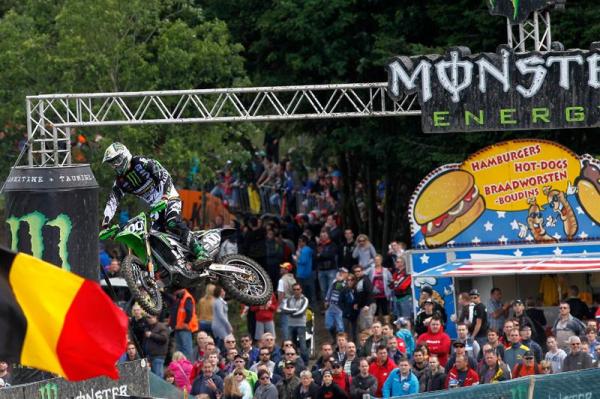 Tommy Searle took the overall in Belguim, but was unable to pick up any points on championship leader Jeffery Herlings.
Ray Archer photo

“We don’t get to come to Europe very often and when we do we are always focused on racing so its nice to enjoy it, hang out and do things that we normally can’t do when we’re racing,” said RV, who was enjoying an injury-induced during-the-season vacation.

“I didn’t go to Lommel. I actually went to visit Stefan Everts at his house and see all of his trophies and bikes. It was really cool to take in all of that. He was racing a long time and to see a collection like that is pretty amazing. Belgian beer? Yeah I found it pretty good two nights ago!”

He also went on the record about all the rumours of a possible shot at being considered for Team USA at Lommel on September 30th. “I’ve heard that they want me to race the Nations but as of right now I haven’t started riding yet and might be able to in the first week of August. So a couple more weeks. I don’t know how it would work but I assume I’ll have to race some U.S. Nationals to be in the running to go. We’ll see. It is very up in the air and there is no real plan.”

In an area that is so synonymous with the United States’ history as part of the European theatre of the second World War, America’s presence on the Bastogne soil on this occasion was non-existent this time. But there were some signs of hope that both Zach Osborne (improving frm a shoulder injury) and Michael Leib (Epstein Barr virus) could be back in the paddock by round nine in Sweden in two weeks or round ten in Latvia in mid-July. 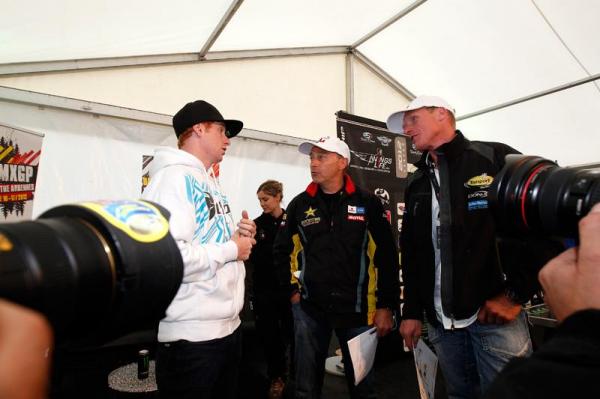 Supercross champion Ryan Villopoto was on hand to take in the action.
Ray Archer photo 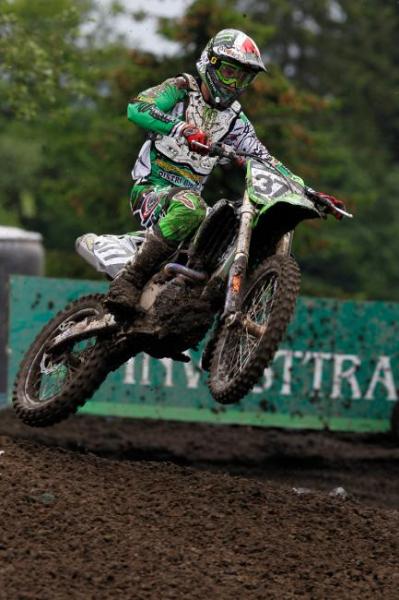 CP377 would finish third on the day via 5-2 scores.
Ray Archer photo 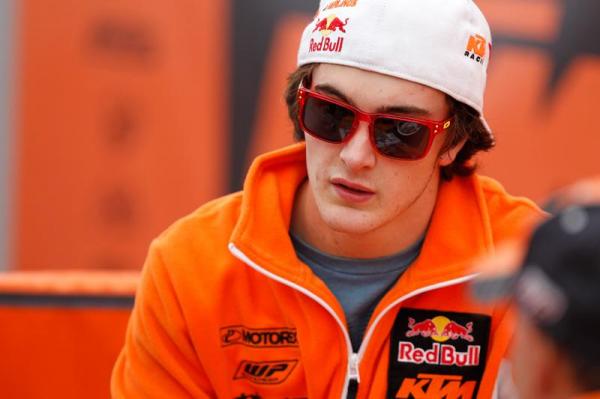