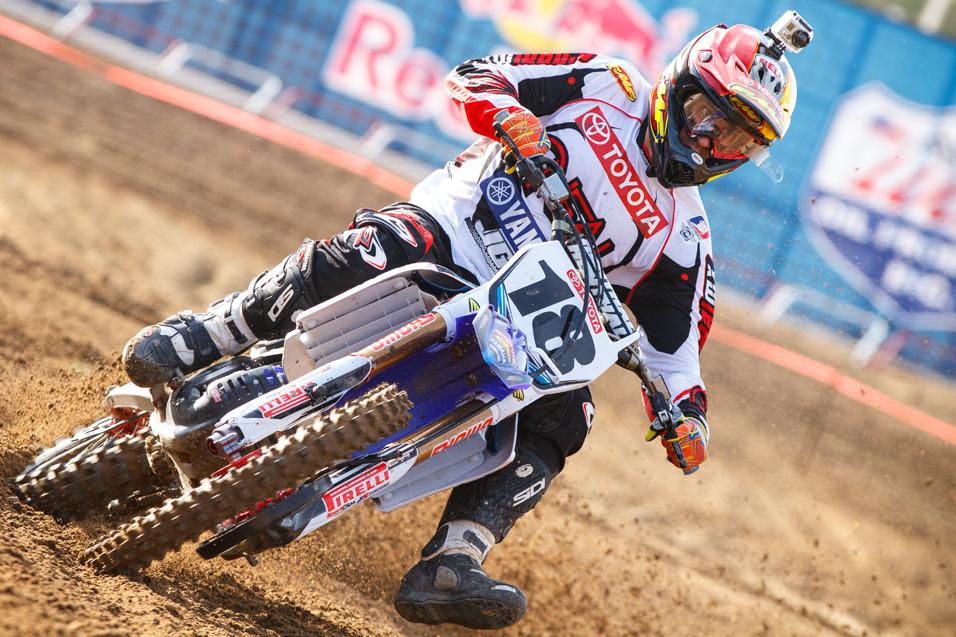 James Stewart – Wrist
Comment: Stewart injured his hand/wrist in a first-moto crash at Thunder Valley. Stewart’s status for High Point has been up in the air all week, until he tweeted the following yesterday: “I'll see you guys this weekend in Pa. Looking forward to racing in front of my fans!”

Martin Davalos – Concussion
Comment: Davalos suffered a concussion while practicing for Thunder Valley. It is unlikely that he will line up at High Point.

Ashley Fiolek – Concussion
Comment: Fiolek suffered a concussion when she crashed during the second moto at Thunder Valley. Fiolek’s status for High Point is undecided at this point.

Tommy Hahn – Broken Finger
Comment: Tommy Hahn broke his finger at Thunder Valley and will not be racing at High Point. 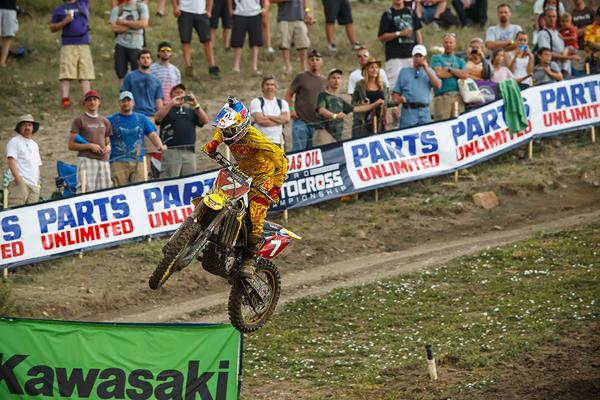 Stewart confirmed yesterday that his injured wrist will not keep him out for High Point.
Simon Cudby photo

Davi Millsaps - Internal Injuries
Comment: Millsaps crashed hard in practice before Freestone and sustained internal injuries that forced him to miss the Texas round. Millsaps is still sore, but will be returning to racing this weekend at High Point.

Tyla Rattray - Broken Metacarpal
Comment: Rattray sustained a boxer’s fracture at Hangtown, and has since had it plated. He has resumed training, and although an official return date has yet to be specified, he is expected to be able to get back on the bike soon.

Justin Bogle - Knee
Comment: Bogle has been battling an issue with his knee since the Toronto Supercross, and has opted to take some time off to have it fixed. Bogle underwent minor surgery last week and is hoping to get back to racing at RedBud.

Marvin Musquin - Broken Metacarpal
Comment: Musquin injured his hand, the same one he broke at Freestone last year, in a heat race crash in Salt Lake City. Before The Nationals got under way, Musquin underwent surgery to have a plate and screws installed, and will be racing the entire National series.

Jessie Wharton – Broken Collarbone
Comment: Wharton broke her collarbone at Freestone and is expected to be out for several weeks. 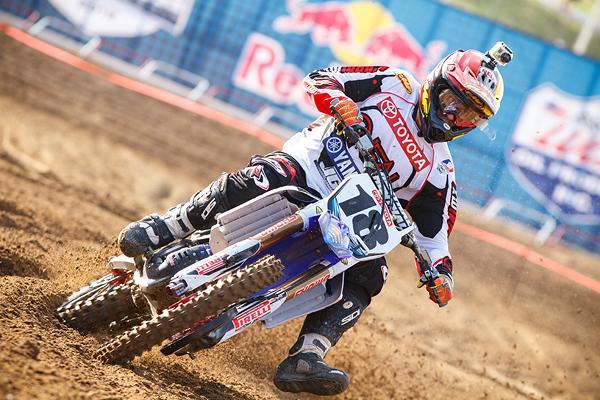 Davi Millsaps makes his return at High Point after missing the last two round due to internal injuries.
Simon Cudby photo

Kyle Cunningham - Sprained Ankle
Comment: Cunningham is dealing with a sore ankle and leg, but will be racing at High Point.

Matt Moss - Calcium Deposits
Comment: Moss had to have some calcium deposits surgically removed from his side. Moss will make his return at High Point.

Jarred Browne - Nerve Damage
Comment: Browne had surgery to repair a pinched nerve in his elbow that had been causing his hand to go numb since New Orleans. Browne expects to be back racing by RedBud.

Christian Craig - Wrist Problems
Comment: Craig sat out most of the Western Regional Supercross Lites rounds after opting to have surgery to fix lagging problems stemming from a broken wrist he suffered last year at Southwick. He is planning on returning at RedBud. 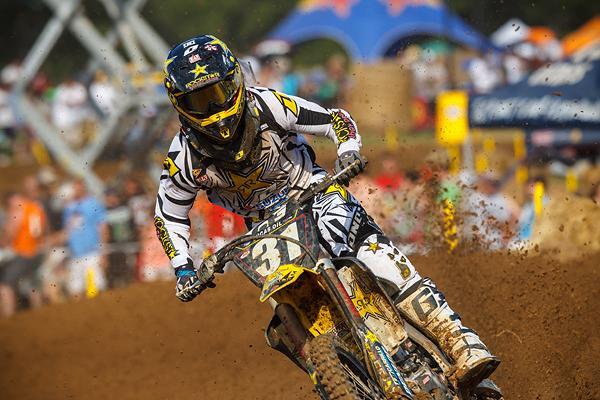 Davalos is out for High Point after suffering a concussion at Thunder Valley.
Simon Cudby photo

Ryan Sipes - Cracked Hand
Comment: Sipes rebroke his hand in SLC when Jason Anderson ran into the back of him on the start of the parade lap. Sipes has a plate and screws in his hand, and will be racing all of the outdoor rounds.

Gareth Swanepoel - Knee Injury
Comment: Swanepoel had surgery to fix an issue with the patellar tendon in his right knee and ended up picking up an infection, which kept him off the bike longer than expected. Swanepoel is racing outdoors, but won’t be at 100 percent for a few rounds, and says he will be racing to limit the points damage.

Sean Hackley Jr. – Back, Ribs, Collarbone
Comment: Hackley had a big crash at Houston SX and suffered some broken bones in his back. Hackley also broke three ribs and his collarbone in the crash. Hackley is back on the bike, but as of now, we do not have an estimated return date.

Bryce Vallee - Lacerated Liver and Kidney, Two Broken Femurs, Three Pelvic Fractures, Shattered Left Elbow with Radial Nerve Damage, Fractured Collarbone and Multiple Fractures in Lower Spine
Comment: Vallee suffered a horrible crash while leading a race at Pala Raceway. After being landed on  multiple times, he was airlifted to Palomar Hospital and underwent two surgeries, with rods inserted in both femurs and three plates and 33 screws used to repair the left elbow. After multiple surgeries, a month in the hospital and much hard work and therapy, Bryce is now walking again much to the surprise of his doctors. With the help of Eddie Casillas of Asterisk Medical and Charles Dao of ICON Sports, here is a video of Bryce walking for the first time on May 30th at the ICON facility in Murietta, less than two months after the crash: (see above). Donations for medical expenses can be made at www.brycevalleemx.com. 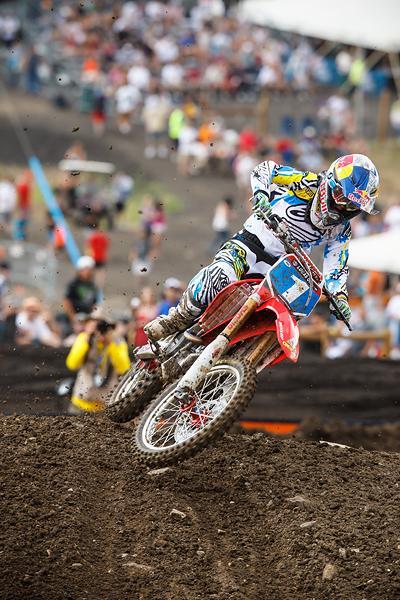 Fiolek’s status for High Point is undecided at this point after suffering a concussion at Thunder Valley.
Simon Cudby photo

Ben Townley - Dislocated Hip and Broken Bone
Comment: Townley, who was intending on racing the Nationals for TwoTwo Motorsports/Bel-Ray, underwent surgery for a femoral head-associated acetabular rim fracture. Although Townley is expected to make a full recovery, he will not be back on the bike for the outdoor season. 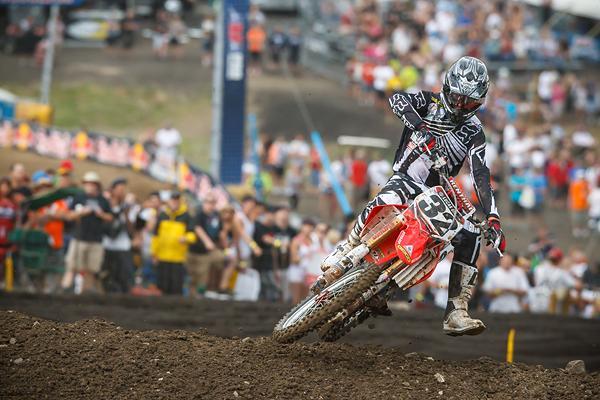 Ryan Morais - Broken Jaw, Several Fractured Vertebrae, Collapsed Lung, Concussion and Broken Ribs
Comment: Morais underwent the final procedure this week in a series of surgeries to put his jaw back together. Right now he is still unsure when he will be able to get back on the bike, as he is still dealing with the effects of the crash.


Know of an injury we’ve missed? Email our man Aaron Hansel, aaron@racerxonline.com, and he’ll handle it.