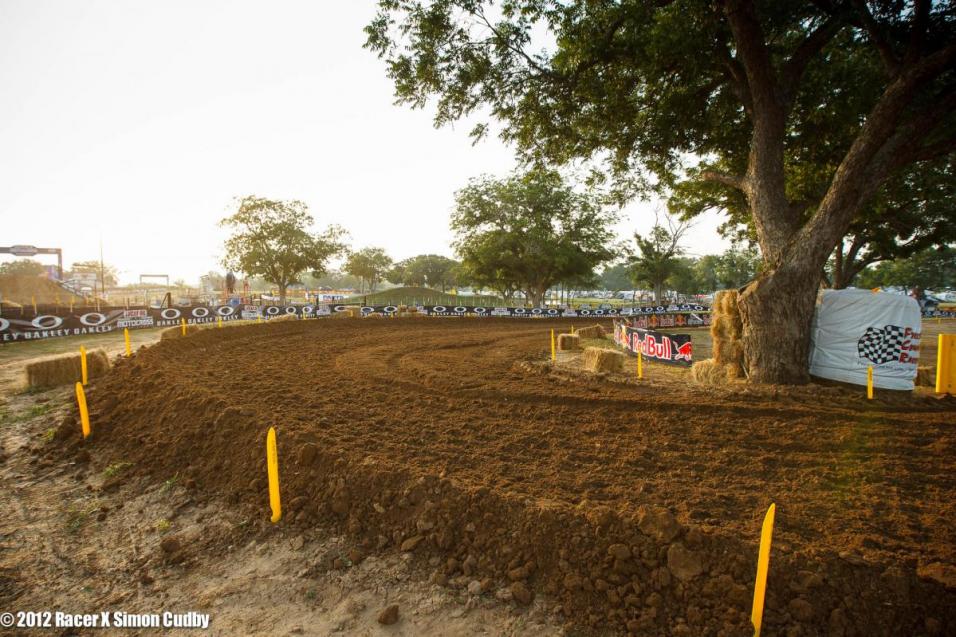 The second round of the Lucas Oil Pro Motocross Championships has kicked off deep in the heart of Texas at Freestone Raceway. With temperatures hovering around 90 degrees, riders were handed a breath of fresh air from the typically very hot and very humid Texas heat.

Bringing back memories of his breakout ride at Freestone in 2010, JGR Yamaha’s Kyle Regal blasted out of the gate grabbing the early lead. But it was short lived as the Texas resident grabbed too much throttle and slid out leaving the gate open for Nico Izzi, Ryan Dungey and James Stewart.

Riding with a fist full of momentum following a dominate opening round victory at Hangtown Stewart quickly pounced on Dungey moving into second, and then set his sights on Izzi. Stewart blasted around the outside to grab the lead and looked to make Freestone “The James Stewart Show” early in the moto. But Stewart would quickly find company up front in the form of Ryan Dungey.

As the laps began to tick away the gap between Stewart and Dungey began to narrow. With less than a minute plus two to go Dungey really began to apply the pressure, giving Stewart everything he could handle and more. Dungey had closed the gap to within a second as the white flag swirled, but was unable to threaten Stewarts lead on the final lap.

Dungey gave Stewart fits down the stretch, and any questions of Stewart being in shape and in form have now been put to rest as he outlasted a strong charge from Dungey to claim the moto 1 win. Jake Weimer made a late charge to claim third.

Although he was unable to hold on to the early lead Nico Izzi put in a very impressive performance in moto 1 with a career-high fourth place finish. Mike Alessi, Josh Grant, Broc Tickle, Ryan Sipes, Tommy Hahn and Andrew Short finished out the top ten.

-  JGR Davi Millsaps suffered a crash in practice earlier this week and had to pull out of the race after qualifying due to internal injuries.

-  Rookie Cole Thompson, who raced the Lites class in Supercross, made his 450 outdoor debut at Freestone. The Canadian finished an impressive 19th in his first moto of the year.