Motul Pirelli Suzuki’s Todd Waters became the first Australian to win a round of the 2012 Monster Energy MX Nationals, Australian Motocross Championship, at Murray Bridge in South Australia on Sunday.

The 21-year-old topped an international field by taking two brilliant victories in the back-to-back races, before dicing with Carlton Dry Thor Honda Racing’s Brad Anderson in the final 30-minute race. He clinched the overall with a close second place, handing him a debut win for Suzuki.

Waters’ podium was his fourth in five rounds and he now sits second in the championship, just 21 points shy of leader Josh Coppins at the halfway point.

“It was a picture perfect day,” Waters explained. “I got three good starts, was in the top three for all of them. I holeshot the first moto and led from start to finish, then in the second moto I was up front again and made the pass halfway through.

“I had a ball riding with Brad in the final moto, dicing for the lead. I love this track and it’s one of my favourites, so it was good to come back and win.

“My fitness is great, I’ve been working really hard, so I’m just looking forward to this six-week break to redo my base fitness.” Todd Waters raced to his first win of the season in MX1 for Motul Pirelli Suzuki.
Image: Simon Makker/Makkreative.com

British champion Brad Anderson claimed second for Carlton Dry Honda Thor Racing after winning the third and final moto of the round, keeping himself in title contention after a disappointing round in WA. Anderson finished second in moto one and fifth in moto two in the South Australia sand.

“I’ve struggled with arm-pump a lot this year,” Anderson revealed afterward. “It’s something I’m going to focus on over the break. The race format here is tougher than in the UK and it’s been a challenge adapting.

“The last race was great and I had a blast fighting with Todd for the win.”

Privateer standout Tye Simmonds put a second Honda on the podium with his third overall result – his second podium of the year. Simmonds went 5-2-4 over the day’s three races.

“I had a couple of crashes during the day, but I’m pretty happy with the result, especially the second place in moto two,” Simmonds said.

“We changed the clutch for the third moto and it made a big difference. We’ll keep chipping away and do a bit of work over the break and come back hard at Hervey Bay.” “I struggled with starts all day, but I rode well in the final race to claw my way back to third,” Bopping said. “I’ve struggled with the 30-minute motos all year, so that was a good confidence booster.

“I’m about to head to the U.S. and do some training there over the break, which I’m looking forward to.”

Waters’ teammate Cody Cooper rounded out the top five for the second weekend in a row, but was still less than impressed with his own performance.

“I’ve been working hard on my starts during the week, but it didn’t seem to help today,” Cooper mused. “I just couldn’t get the jump I wanted and had to kinda push uphill from there. It was a little frustrating today, to be honest.”

CDR Yamaha’s Coppins was sixth at Murray Bridge after a tangle with Jake Moss in the final moto saw him lose a stack of points in the points’ chase.

Prior to that, Coppins had finished third in moto one and sixth in moto two. The GP legend will now head to Europe during the mid-season break. 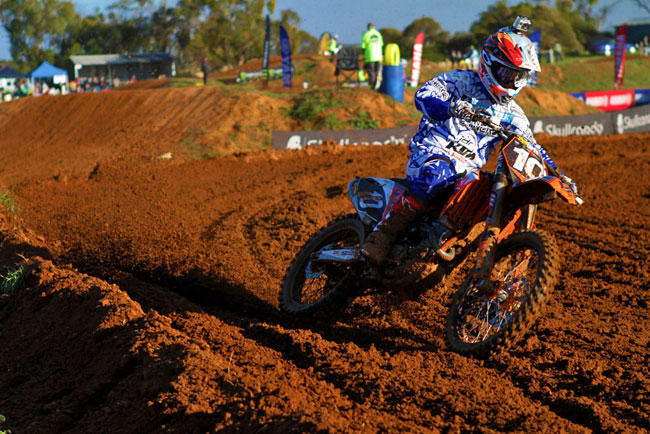 Josh Cachia claimed his first win of the season at Murray Bridge in the MX2 ranks.
Image: Simon Makker/Makkreative.com

Cachia rode to fifth in the opening moto, before breaking through for a win in moto two, then he sealed the overall with a fighting second to conclude the round.

“In the first moto I rode solid, got stuck behind some people, but that’s racing,” Carpenter Rocks resident Cachia explained. “If you don’t get a good start you don’t get in clean air, so that was my fault. In moto two I sorted it out, got the holeshot and felt good.

“In the 30-minute moto, Boydy and I worked hard until the end, so it was sweet. I rode solid, so to come away with the #1 plate today feels good.”

DPH Motorsport Honda’s Cheyne Boyd claimed his second podium in a row with a well-deserved victory in the final moto, when he held off a fast-charging Cachia and Ford Dale for the win.

Boyd opened the round with a second in moto one, but a crash – and a resulting eighth in the second race dashed his hopes of victory.

“I don’t want to harp on the negative, but that crash in the second moto cost me the overall today,” Boyd reflected. “It was a small mistake that turned into a large crash and I just had to salvage as many points as I could.

“In the final moto I was chasing Cachia, but I knew he couldn’t hold that intensity up for a full half-hour, so I bided my time, then passed him late in the race.

“I can’t be happier with how both my fitness and my bike are at the moment. We’re building some nice momentum.” The final podium position in MX2 went to moto one winner Ford Dale. The Carlton Dry Honda Thor Racing rider had Ben Townley in his corner throughout the weekend, but Dale suffered from a crash in moto two that left him circulating in 15th. Dale bounced back to third in the final moto and overall.

“I qualified on pole and Ben and I worked out a great gate pick,” Dale said. “That helped a lot with my first race, which I led from start to finish.

“In the second moto I made some bad choices in the opening lap and crashed twice, but I felt my speed in the final 30-minute race was right up there. I caught Josh and Boydy, but I just ran out of time.”

McDonald was on track for his first podium of the year after a 4-4 result in the back-to-back races, but a horrendous start in the final saw him caught at the back of the pack and he dropped out of podium contention as a result.

Serco Yamaha Metal Mulisha Racing’s Styke had a disastrous first moto, but salvaged his round with a second and a fourth in the final moto. Despite a fifth place result he still carries a comfortable 32-point lead in the MX2 title fight. 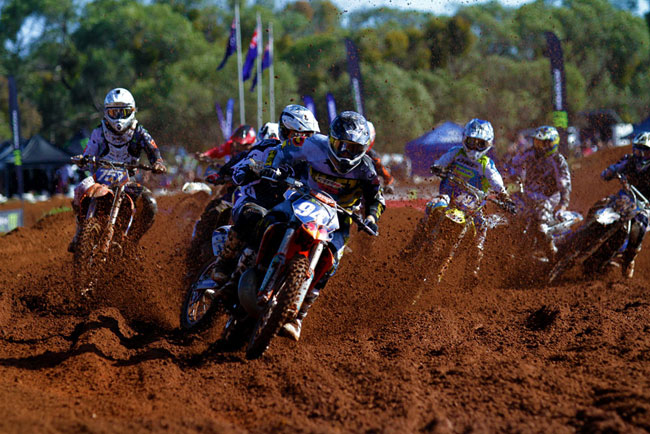 The KTM rider was sixth in the first moto, but he bounced back to win moto two and finish second in the final moto to clinch the overall. Lamont now sits nine points behind series leader Dylan Long.

Long was a solid second wrapping up his day with victory in the final moto. Dylan Leary completed the podium, making for a 1-2-3 result for KTM.

Motul Pirelli Suzuki’s Jay Wilson finished fourth overall for the round, while GYTR Yamaha’s Sam Martin was fifth. First moto winner Joel Milesevic had to settle for sixth after suffering a mechanical in moto two, but he finished the weekend with third in moto three.

The Australian Motocross Championship now heads into a five-week break before returning for round six at Hervey Bay in Queensland on Sunday, 1 July.