New Zealander Josh Coppins won his second Monster Energy MX Nationals round of the 2012 season in the Australian Motocross Championship’s return to Wanneroo in Western Australia on Sunday, 20 May.

MX1 series leader Coppins extended his series lead in another impressive performance, winning motos one and three to increase his championship lead to 42 points despite riding through the pain of a pinched nerve in his neck.

“The last round didn’t go to well for us, so it’s nice to bounce back and I really want to thank CDR Yamaha for all their hard work,” the New Zealander said on the podium.

“We’ve been working really hard, they’ve been looking after me and I can’t say thanks to the team enough. It’s pretty tough out there, so I just want to try get rid of my injury, loosen up and try ride a bit better as the season goes on.”

Despite the relentless sand whoops of Wanneroo that formed throughout the round, Australia’s leading contenders pushed at 100 percent during all three of the pro motos in the series’ first visit to WA since 2009. Backing Coppins up to make it a Yamaha 1-2 was teammate Lawson Bopping, who picked up his second podium of 2012 after a consistent effort. Bopping claimed second in moto one, third in moto two and sixth in the final outing.

“It was good to come out and finish with a second and a third in the opening motos, but I sort of struggled in the final one and that’s been the story all year,” Bopping explained. “I’ll really work on that this week and hopefully put it up there in the 30-minute moto during the next round.

“We’re really building momentum now and it’s coming together really good, so massive thanks to the CDR Yamaha team. This is probably the toughest track I’ve ever ridden, so it’s good to stand on the podium.”

Continuing his spectacular run of results since joining Motul Pirelli Suzuki was Todd Waters, finishing third overall in what was his third podium in four rounds. Waters was fourth in motos one and two, before a third in the final moto sealed the podium.

“Our main focus is to get on the box every weekend and keep it consistent,” Waters said. “I’ve really got to hand it to Jay [Foreman] and the team, they’ve been putting in a big effort and it’s starting to pay off. 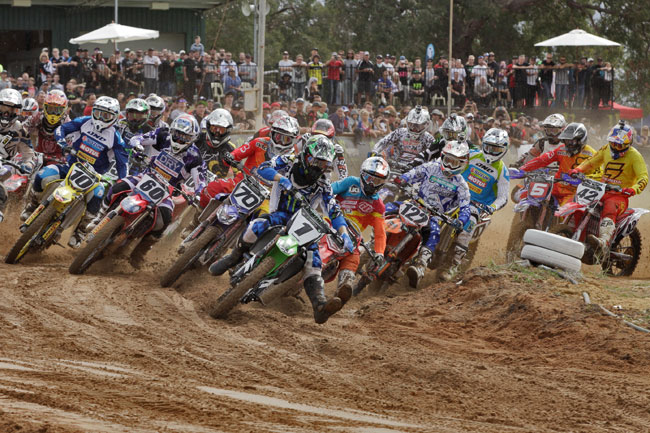 The MX1 class gets underway in the toughest outing of 2012.
Image: Adam Riemann.

“Dad was there spinning spanners for me this weekend, so that was pretty cool. I’ve really been enjoying the longer motos, they give me a chance to find my lines and just keep charging for the finish.”

The hard-luck story of the round was defending four-time champion Jay Marmont, who broke through for his first win of the season for the Monster Energy squad in moto two. His day ended early in moto three though, forced out late in the moto as his pre-season knee injury continues to take its toll.

Moto three was spectacular in the opening stages before riders raced for 30 minutes, with Coppins, Marmont and Anderson doing battle in a clash of the titles for Aussie motocross.

Motul MX2 championship leader Luke Styke picked up his second overall of the season for Serco Yamaha Metal Mulisha Racing, winning motos one and two before finishing fourth in the gruelling final moto.

“After putting in hard this weekend, I just want to thank the Serco Yamaha Metal Mulisha Racing team and the club for a great event,” Styke said. “It was a good weekend and it feels good that all the hard work is paying off for all of us, but it’s early in the season and we need to keep trying the best we can.” Coppins, Marmont and Anderson battled hard in the final moto of the round.
Image: Adam Riemann.

Styke won ahead of DPH Motorsport Honda’s Cheyne Boyd, who enjoyed a consistent round for his first podium of the season. After setting pole on Saturday, Boyd raced to second in moto one and third in the final two motos of the round.

Zero Seven Motorsports Suzuki rider Adam Monea was third overall, winning the final moto in a dominant performance. The Victorian was yet again back to his best in WA, edging out fellow Victorian Kade Mosig for the final position on the podium by just a single point.

Motorex/KTM’s Josh Cachia completed the top five despite battling through the day with an expected bout of appendicitis, heading another Victorian in Lewis Woods. Woods enjoyed his best round of the season by far for the Hart and Huntington/InsureMyRide team.

Title contenders Ford Dale (Carlton Dry Honda Thor Racing) and Kirk Gibbs (Serco Yamaha Metal Mulisha Racing) had a day to forget, with Dale taking seventh after a troublesome day, while Gibbs will have to settle for 13th after a flat tyre in moto one forced him out of the points.

Styke now enjoys a handy 39-point lead in the series ahead of Dale, while Gibbs remains third as we approach the halfway point.

The Australian Motocross Championship will now head straight to Murray Bridge in South Australia for round five of the Monster Energy Mx Nationals this weekend on 20 May. 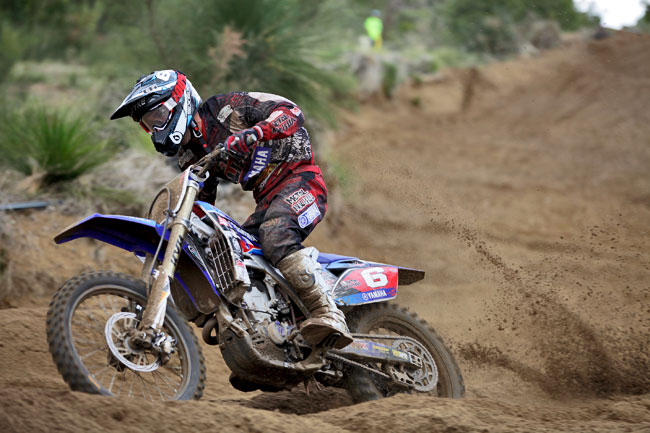 The MX2 category was headed by Luke Styke in his second win of the season.
Image: Adam Riemann.