Following his second overall result at the opening round at Conondale two weeks prior, the CDR Yamaha rider took control of the championship lead with a 4-3-1 result in the three premier MX1 motos.

“It feels good to win because I felt like I struggled and didn’t really ride that well today,” former world number two Coppins said. “The two back-to-back five-lap races aren’t what I’m used to, but I guess everyone has to adjust to it.

“The 30-minute moto suited me a lot better, as it gave me enough time to chase down Tye [Simmonds] and take the overall for the day. It’s been a great start to the season for me so far.”

Coppins’ triumph came as a late surprise after Australian class returnee Jake Moss took two spectacular moto wins in the back-to-back races, proving himself once again as a surprise threat for this title chase in 2012.

With expectations high for Mossy to clean-sweep the day’s proceedings, the Sussex Inlet local fell early in the final moto and was forced into damage control.

After picking himself off the deck Moss clawed his way back to 16th, which was enough to land him on the podium. 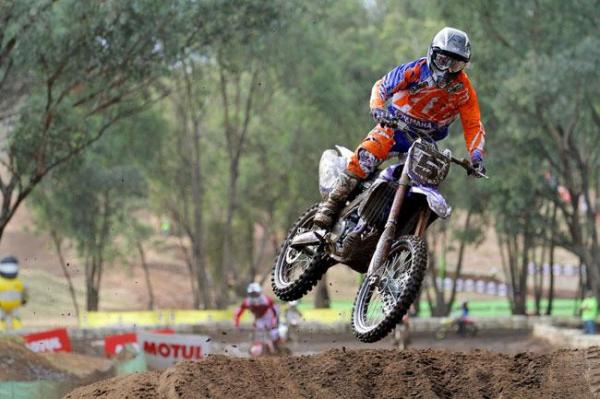 “I was really pleased with how I rode in the first two races,” Jake reflected afterward. “But then the old habits crept back in for the last race.

“I was pretty disappointed as I’d built a great platform for a better result with the first two wins. I’ll take the good points from this weekend and keep working hard and come out stronger at Wonthaggi in two weeks’ time.”

Capping off a great weekend for privateer riders, Bourke’s Tye Simmonds scored a satisfying second overall, despite forming his own team just weeks before the start of the championship.

Simmonds 5-4-2 result, including leading most of the final moto, was the perfect birthday present for his dad, Greg.

“We’ve been working flat-out to get this bike up to speed in such a short time-frame, but we’re starting to see the results now,” Simmonds explained. “I really enjoyed this track today – it was fast and flowing and it held up well.”

Marmont was in the driver’s seat for a final moto victory when he built an early lead, but succumbed to pressure from Simmonds and Coppins. However, his fourth overall has boosted him from seventh to third in the standings. 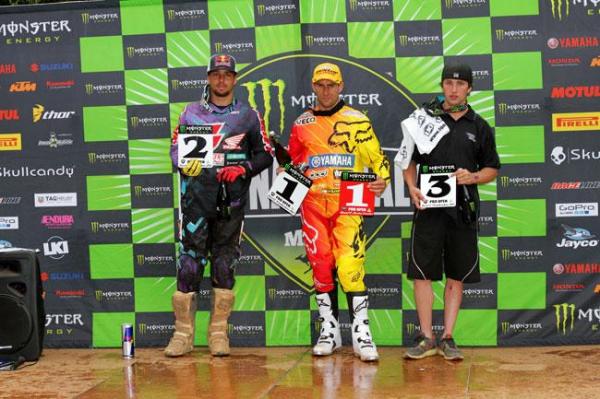 Marmont’s cause was helped by the disastrous crash of Ben Townley on Saturday, when he dislocated his hip on just the second lap of practice.

BT was stabilised by Suzuki RACESAFE at the circuit before being flown to Sydney. The tragic injury almost certainly rules out Townley’s US Outdoors campaign for Chad Reed’s TwoTwo Motorsports.

Serco Yamaha Metal Mulisha Racing’s Luke Styke took a spectacular clean-sweep of the three Motul MX2 class races, proving he is back fitter, faster and stronger than ever before. By doing so, series leader Kirk Gibbs relinquished his red plates to his team-mate Styke.

“It was a perfect weekend for me,” Styke said afterward. “I’m real motivated this year after spending last year as a privateer. It has made me appreciate everything so much more and I’ve been working hard to make the most the opportunity Serco Yamaha has given me.

“I’ve been stepping up everything, from my training to my work ethic, and things are falling into place. I couldn’t have wished for a better result.”

Styke’s teammate Kirk Gibbs, finished in the runner-up position at Coonabarabran with a consistent 5-4-2 result.

“I struggled in the first two short motos and hit the deck in both of them,” Gibbs explains. “I had to put in some hard charges to minimise points, deficit, but I put together a good race in the third moto.

“Luke was hard to beat today, but having two riders on the podium two rounds in a row shows just how well the team is working.” 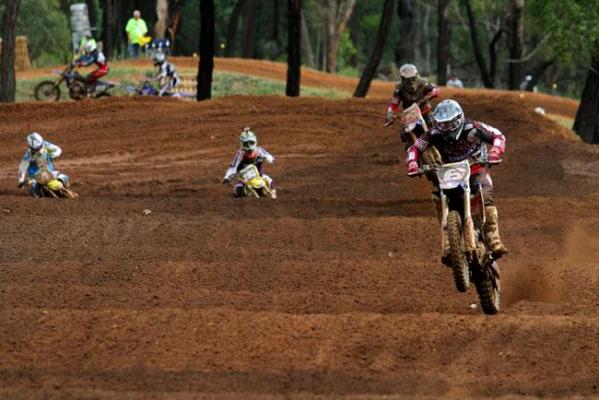 Styke was untouchable at Goanna Tracks to take over the MX2 red plate.
Image: Simon Makker/Makkreative.com

Completing the podium for the round was Monster Energy Kawasaki’s Kade Mosig despite getting caught up in the start gates in the third and final moto. Mosig raced to 2-5-6 results in his first podium for Kawasaki.

A resurgent Cheyne Boyd (DPH Motorsport Honda) finished the day with an impressive fourth overall and just one point shy of a podium finish, living up to pre-season expectations after stepping across from the MX1 class in 2012.

Ford Dale (Carlton Dry Honda Thor Racing) rounded out the top five, but was hampered by frustrating bad starts and had to elbow his way through the pack in the two short races.

“It was tough out there,” Dale said. “I qualified well yesterday, but I kept getting bad starts and it made my day a lot harder than it needed to be.”

The Pirelli MXD class for Under 19s riders was won by 18-year-old Tasmanian talent Dylan Leary (KTM), riding a borrowed 250 SX two-stroke to the overall in a tight race for the victory, after his personal bike suffered a mechanical failure on Saturday.

“It’s a really good result and I had to borrow a bike for this weekend after practice,” Leary said. “It’s a surprise because last year I did the final three rounds and my best race result was something like ninth.

“But this off-season I worked hard and it’s all about consistency. If I can stay in the top five every race in should work out well.”

Leary won the round by a single point from Axis Kawasaki’s Mitch Norris, who suffered a flat tyre while leading the third and final moto of the weekend.

Completing the top three was another KTM privateer in Joel Milesevic, who proved the victor in the second moto of the weekend. 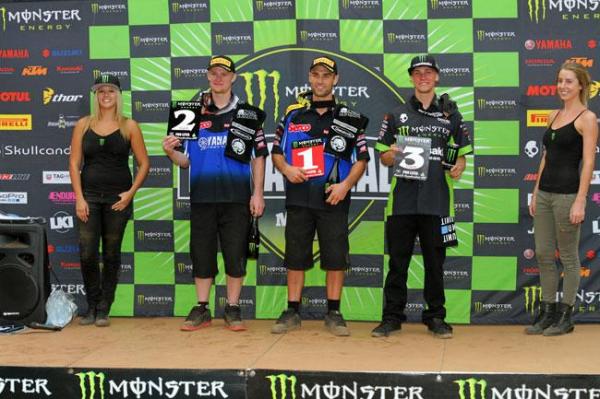 The opening moto victory went to former junior world champion Jay Wilson aboard the Raceline Pirelli Suzuki, however he was forced to settle for seventh overall, with a fall in race two and a bad jump off the gate in race three.

Round one winner Dylan Long maintained his championship lead with fourth overall for Choice Motorsports KTM.

The series will continue at Wonthaggi in Victoria on 28-29 April, marking round three of 10 for the 2012 season.