After last weeks race at Daytona Supercross where Ricky Renner was in the running for the Main Event things were going great, until his bike blew up . Ricky was challenging some of the top riders in the sport on a 2-stroke YZ125.

That’s not a misprint, he was all out giving it all he had while battling his way through the pack in a rainy muddy night amongst the 4-stroke 250f’s. His bike was labeled as underpowered to compete, but he was strong minded and was right there. After a heartbreaking DNF and at the request of his fans Ricky is going to have a go at it again. This time it will be in the dry domed stadium for the New Orleans Supercross Race.

Get Dirty MX is printing Ricky Renner “Braaaap at the Bayou” tees where a portion of the proceeds will go directly to Ricky to help him with his Privateer efforts to cover some of the costs to race the New Orleans Supercross Event on April 14th.

Tees are only $15
Click here (www.getdirtymx.com/shirts.php) to get yours.
Thank you and Get Dirty! 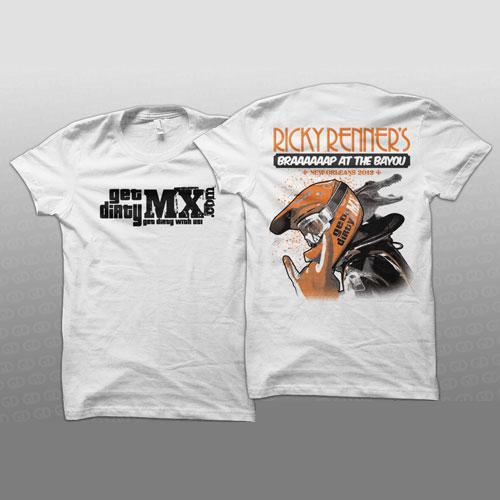