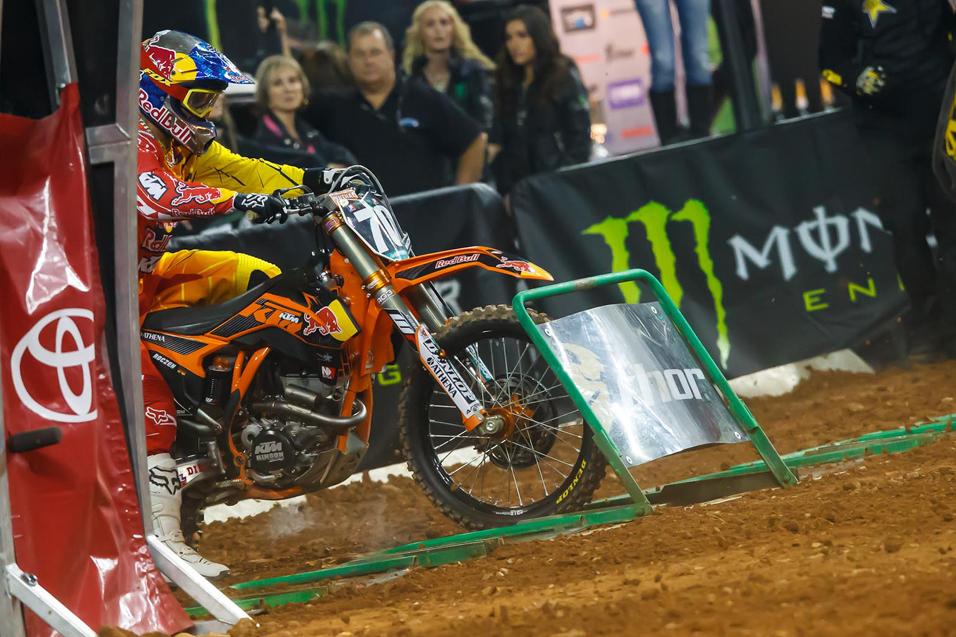 Supercross is a game of inches, especially when its a 15-lap Lites main event. We saw that last night at the jam-packed Georgia Dome when many young stars made simple mistakes that cost them plenty. Take Ken Roczen, for instance. The Red Bull KTM rider was poised to make a run at Justin Barcia and maybe get a crack at starting another one of those Barcia-can't-beat-Roczen-in-his-dreams threads going on the message board, but then he released the trigger a hair too soon, inched under the starting gate and got stuck. The German rode like the champ he is afterwards and salvaged sixth-place, but his foil was long gone with the win.

Or take fellow KTM rider Malcolm Stewart's painful-to-watch night. He looked very fast and confident while leading his heat race, only to misjudge a rhythm section and come down extremely hard on his head and shoulders. He got back up, walked it off, and lined up for the LCQ, only to have his bike fail to start. They did not hold the gate (just like they didn't for Ryan Dungey at Southwick last year, which goes to show that there is consistency in the race-starting procedure) and Mookie's night ended way too early. He had podium speed, and if things went his way, maybe even a win. 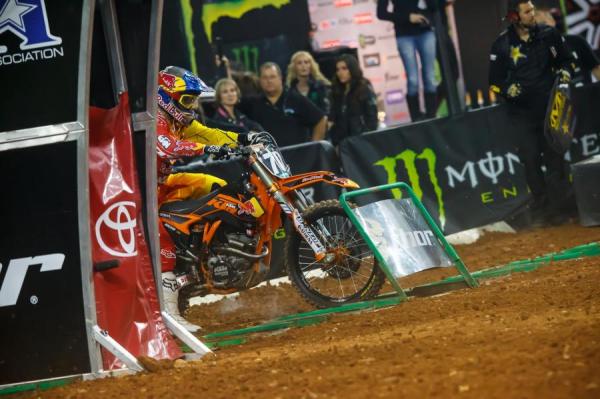 Roczen salvaged a sixth-place finish after getting stuck in the gate off the start.
Photo: Simon Cudby

Blake Wharton made enough small mistakes to surrender first a heat race win and then a podium spot, and guys like Darryn Durham and Kyle Cunningham were just plain off.

Add it all up, and the guys who gave away the least inches—the ones who made the least mistakes—reached the box. Blake Baggett and the rookie Justin Bogle were consistently fast, and they reward was second and third, respectively. And GEICO Honda's Justin Barcia seems to be learning more and more about the craft of race management, making fewer mistakes while moving forward all the time. Management and momentum—the career traits of the two guys leading the big-bike class now in Villopoto and Dungey—is something that's going to make Barcia tough to beat in this region.