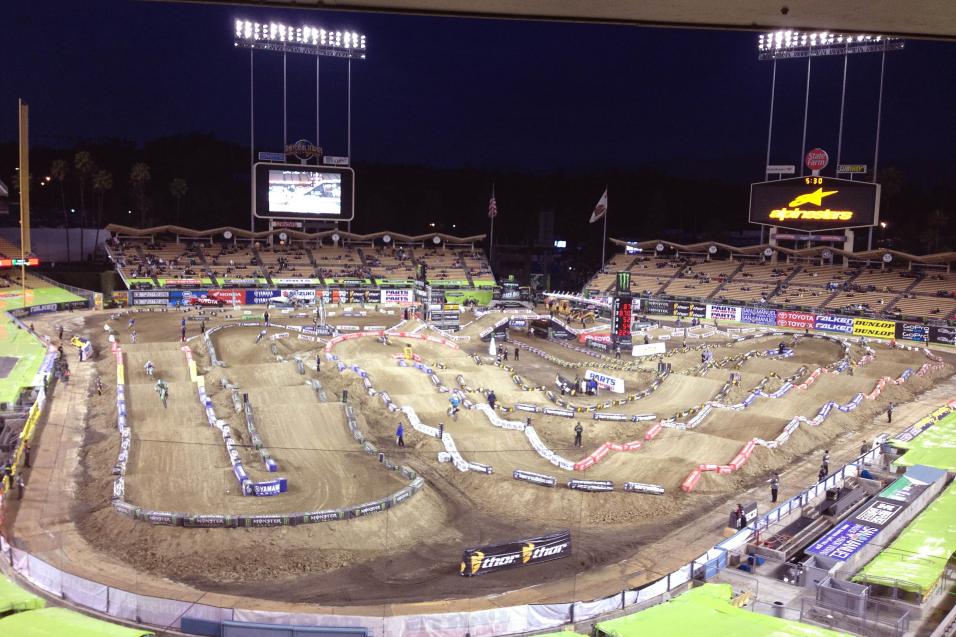 January 21, 2012 8:35pm
by: Aaron Hansel
Dodger Stadium Los Angeles, CA Los Angeles Monster Energy AMA Supercross Championship
Practice has ended here in Dodger Stadium, and so far, the weather has held out great. The track crew kept the racing surface covered during the rain, and then the tarps came off under sunshine. For the most part, the track is bone dry. So dry in fact, that several sections have become extremely hard and dusty, not unlike the Las Vegas venue. The rain we received earlier did have some effect though, as there are few wet areas in between obstacles.

Initially the track map depicted a track void of whoops, but the actual track does indeed feature two whoop sections. One is long, and the other is short. Interestingly enough, the longer section consists of seven whoops, while the shorter one has six. The whoops in the longer section are spaced extremely far apart, and are very inconsistent in shape and height. They are far enough apart that they are not blitzable, and the riders have resorted to turning them into a rhythm section.

Speaking of rhythm sections, this track is full of them. Unfortunately, they are all pretty basic and have very obvious sequences. The lack of multiple options in this track’s rhythm definitely has this reporter singing the blues.

Due to the threat of rain, practices were cut down to a single qualifying session per group. This means that the riders won’t have the chance to try different settings, and setup will likely play an especially large factor in tonight’s main events.

Martin Davalos came out of the gate quick, setting the first fast lap of the Lites A practice, but it wasn’t long before the lead started changing hands. Dean Wilson and Marvin Musquin both enjoyed brief periods at the top of the leader board, but roughly halfway through the session, Eli Tomac climbed into the lead and stayed there. When it was over, Tomac was fastest with a 54.820, followed by Zach Osborne (55.015), Musquin (55.033), Wilson (55.225), Davalos (55.667), and Rattray (55.933). Anaheim 1 winner Cole Seely was 12th fastest with a 56.275.

When the 450 A session rolled out, Ryan Villopoto wasted zero time before banging out a fast time. A few laps later, James Stewart laid down a fast time of 54.059, then went a few turns and crashed at the end of the whoops, prompting Stewart to leave practice after recording a mere three laps. The longer whoop section has kept most of the guys guessing, with the exception of Ryan Morais, who has it dialed. Morais is rolling in, wheel tapping through the middle, and tripling out. It looks far faster than any of the other lines anyone has tried so far. When the session was over, Villopoto had reclaimed the fastest time of the night with a 53.993, followed by Stewart (54.059), Ryan Dungey (54.766), Davi Millsaps (55.063), Justin Brayton (55.115), Chad Reed (55.139), Jake Weimer (55.300), Ivan Tedesco (55.393), Trey Canard (55.398) and Brett Metcalfe (55.595).

Be sure to keep checking Racer X Online for info from tonight’s action, and follow us on Twitter, @racerxonline, for live updates, all night long.