“After testing the new KTM over the past two weeks, I am feeling confident enough to compete and am really eager to see where I stack up against the competition,” mentioned Dungey. “It’s a last minute decision to race this event but the team is behind me 100% and I am excited to make my debut on the bike.”

On October 1, it was made official that Dungey will compete aboard the KTM 450 SX-F motorcycle as part of a two-year agreement after five years under the Factory Suzuki tent. Dungey, 21, will ride under the guidance of legendary team manager Roger DeCoster, who brought Dungey into the professional ranks in 2007. 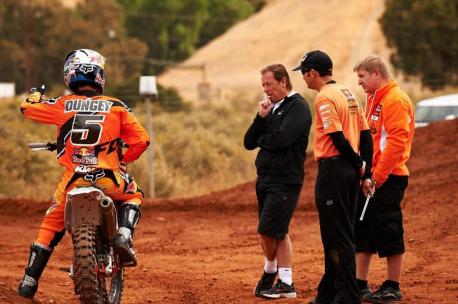 “To my surprise, Ryan was eager to race the Monster Cup,” commented Red Bull/KTM Factory Team Manager Roger DeCoster. “We didn’t expect him to race after only two weeks on the bike, but he will use the event to help gauge where he stands speed-wise against the competition. It will also give the team a racing opportunity to test different set-ups with the bike prior to the opening round of the Supercross. Ryan can then take this experience to prepare his training regime this winter.”

“I’m looking forward to riding for the new Red Bull/KTM team and working again with Roger. I am excited to start something new and am ready for the challenge. I like the way that KTM has backed Roger since he made the switch last year and I appreciate KTM’s goal of working hard to develop their race team to earn championships. I am making this switch to win races and work toward getting that championship for KTM.”

The unique hybrid track will consist of supercross/motocross terrain and will have a tremendous motocross-style influence, making it unlike any other stadium race in the world. This track will be the perfect blend of supercross and motocross combined and created into the ultimate battleground. The Monster Energy Cup posts a $250,000 purse with the winner walking away with a $100,000 check, and for the “first time ever” $1 Million will be paid to a rider that wins all three main events.