The collaboration between McGrath, the king of supercross, and Carmichael, the greatest rider of all time, has produced the world’s longest stadium racetrack, consisting of motocross and supercross obstacles. For the first-time ever at Sam Boyd Stadium, the track will be built into the south end zone seating area. Two-hundred-forty feet of the track will launch riders into the stands and catapult them back to the floor of the stadium. With a 100’ double set on the outside part of the track and a 200’ lane stacked with two-foot sand rollers, this is one of the most diverse race tracks ever assembled.

Arguably the most important item on the list was the racetrack. “We didn’t want to have a full-on supercross track, but instead more of a hybrid track mixing both elements of supercross and motocross,” said Eric Johnson, communications director, Media Monster Energy. “We also wanted to try to attract riders from all over the world, so a more natural-type track would be key.”

To ensure a perfect design, the best motocross and supercross riders to ever throw a leg over a motorcycle were recruited: Ricky Carmichael and Jeremy McGrath.

“Our idea was to commission the greatest riders in the two disciplines, supercross and motocross, and design a Hybrid track that is symbolic of the years of experience between these two legends,” says Todd Jendro, Feld Motor Sports’ senior director of two-wheel operations. 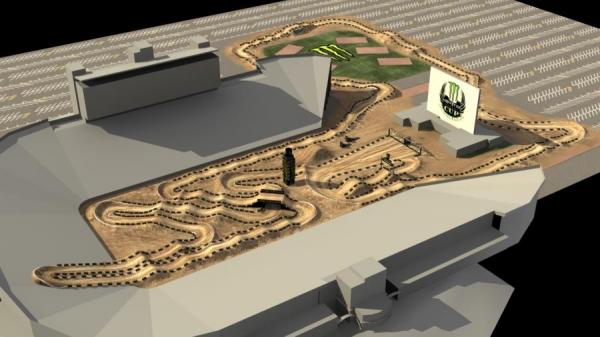 The collaboration between McGrath, the king of supercross, and Carmichael, the greatest rider of all time, has produced the world’s longest stadium racetrack, consisting of motocross and supercross obstacles.

“We decided that bringing the track into the stands would be a spectacular addition for the riders and fans,” said Jendro, Feld Motor Sports. “The biggest factors for us are making sure this section of the track enables the riders to push the limits of gravity, all while encouraging them to pass one another in the process. An event this exciting deserves something special, and we’re going to bring back this iconic element of the track design, which was made famous at the L.A. Coliseum and the Pontiac Silverdome.”

“Our goal was not to make this just another supercross event,” said Dave Prater, director of supercross, Feld Motor Sports. Stressing that the hybrid track will be suited to a wide range of riders—including international riders. The track itself will also be developed for an open-class displacement concept. “We will create obstacles, corners, and the start straight to help the 250cc machines compete against the 450cc machines, which will in turn level the playing field.” 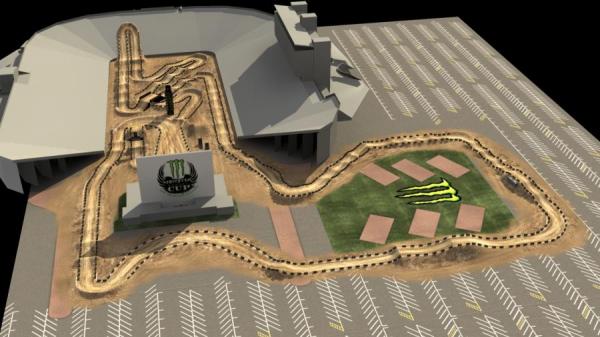 “For the first time ever the track will leave the stadium and stretch through the pit area before launching riders back into the stadium and down a long motocross-style section.  Fans will be able to flow from the stadium to the pits and get an up close look at the greatest riders in the world holding it wide open,” said Prater, “The ‘outdoor’ section makes up about 1/3rd of the course and offers fans the chance to see the fastest track ever in a stadium environment.”

“Getting the basic layout is the hard part, and I now realize it’s a lot more work to design a track than ride one,” said McGrath. “When you are in charge of designing a race track, you get a lot of criticism because it is hard to make all of the riders happy. This is a much bigger track than the riders have ever ridden, and it is going to be exciting to watch. I am looking forward to the seeing the uphill section built into the stands.”

Carmichael, who has two wins inside Sam Boyd Stadium, is excited about the final product.

“Now that the track is completed, I am even more excited to see the great racing that this track is going to produce,” said Carmichael. “I think the outside section is going to be epic, and it goes without saying that the inside has a design that will also lend itself to some great battles, especially with the track going into the stands.”

Tickets for the 2011 Monster Energy Cup can be purchased at the Thomas & Mack Center Box Office, UNLVtickets outlets, online at www.UNLVtickets.com, www.MonsterEnergyCup.com,  or by phone at (702) 739-FANS. Tickets will be available at the Sam Boyd Stadium Box Office on the day of the event only.