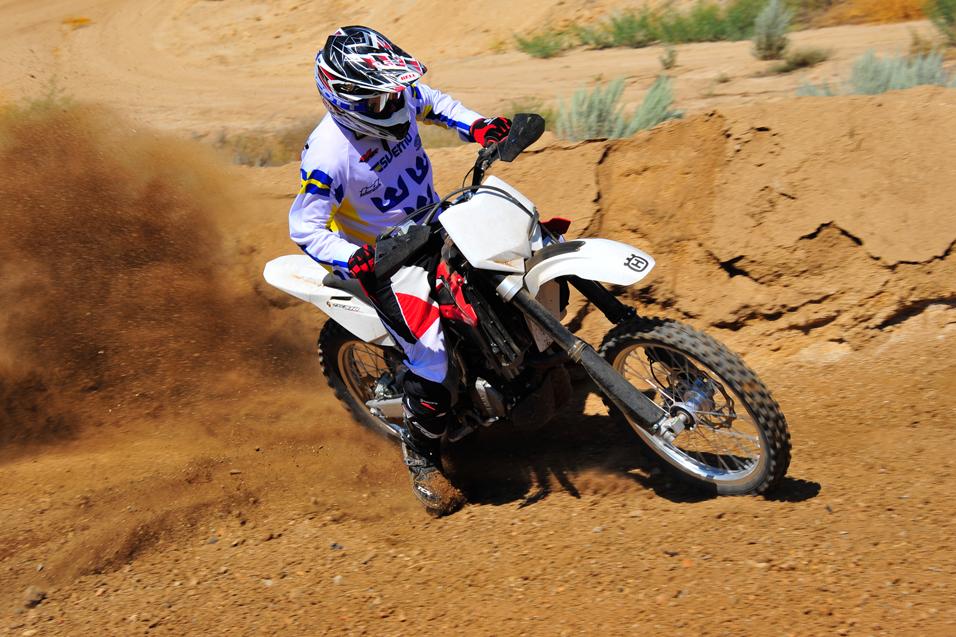 Timing is everything, and when the date of the Husqvarna 2012 model intro corresponded with the Lucas Oil AMA Pro Motocross Championship final at Pala, a cosmic alignment was set in motion, one which allowed me to attend the Husqvarna intro and relive a milestone in my publishing career.

This year's Husky press intro took place at The Ranch in Anza, California, on a track designed to replicate the old Carlsbad Raceway circuit. The first new-bike intro I ever went to was a Husqvarna new model intro at Carlsbad Raceway for the 1977 line of bikes. It’s a surreal thing to be here at a re-creation of the Carlsbad track, witnessing a re-creation of the Husky brand. Especially when I drive in and see Danny LaPorte and Jim Gibson pounding laps in re-created JT Racing gear! 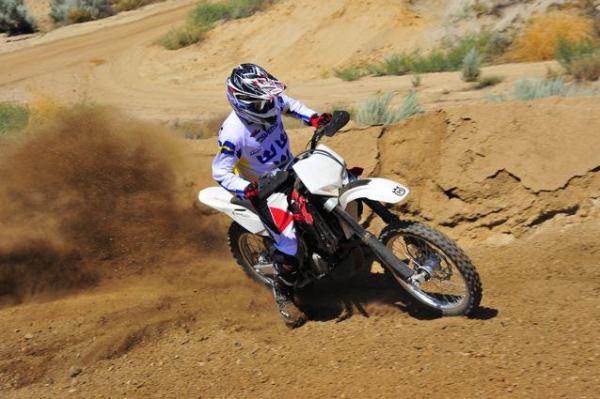 Working out the new Huskys at a perfect replica of a famous old track--Carlsbad!
Scott Cox photo

For possibly the first time since that maiden media intro, Husqvarna has presented the entire line of bikes to the press-–and rather early in the year (by European standards). The American distributor of the Swedish-bred, Italian-run, German-owned brand is largely focused on the dual-sport and off-road markets. The street-legal TE line of bikes, the cross-country TXCs and two-stroke WRs were showcased at the intro, but naturally my interest was focused on the TC (and CR) motocrossers.

Like many, we’ve been watching the re-emergence of the iconic brand with great interest. With all its ups and downs over the past few decades, Husqvarna is still on a mission to prove its mettle in the North American market, and since being acquired by BMW in 2007, they’ve made some steady progress. At the intro, we got to witness the progress of an entire model year as all 13 of Husqvarna’s 2012 off-road motorcycles were presented to media.

The flagship of Husky’s 2012 moto-family is the TC250, which is thoroughly reworked this year with a new piston and cylinder head, revised suspension and new Akrapovic exhaust. A dose of BMW’s F1 race technology and some choice DLC-coating on engine components promises to punch up performance on the 250-class competitor, and power is further boosted across the board by way of a revised airbox and velocity stack that feeds the new Keihin fuel injection. 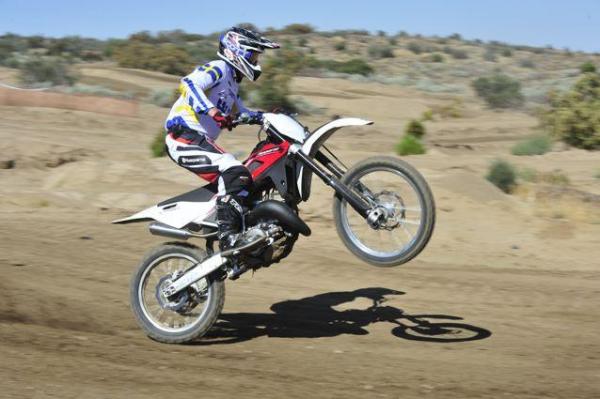 Our man Wallenberg had the most fun on the CR125 two-stroke.
Scott Cox photo

The TC449 also receives a share of advancements, and power gets a shot in the arm by way of new valve timing, a revised airbox and re-shaped velocity stack. The dual-map ignition is also new, which features a handlebar-mounted switch that can toggle between settings on the fly.

Not to be overlooked is the mighty CR125. No, it’s not a ten-year-old misplaced Honda that wandered its way into the Husky event… the CR125 is Husqvarna’s eighth-liter two-stroke motocrosser, and the bike I couldn’t seem to get enough of at The Ranch. Though it’s not largely changed, the CR isn’t without a share of updates for ’12 including a reinforced all-black chromoly frame, silver Excel rims and of course, those bold new graphics! But what is new for 2012 is the fact that the little zinger comes with a 144cc top-end kit. Every 125 purchased comes with an additional piston and cylinder so just when you think your idiot-grin can’t get any bigger, you can pump it up by another 19cc’s.

As for riding the new Husky scoots, idiot-grins were abounding, and not just because of that new-bike smell or the plumes of two-stroke exhaust that perfumed the Anza air. The Carlsbad replica track brought an all-too-appropriate retro flare to the event. And make no mistake; the style and layout of the track isn’t just similar to the real thing-–it's a dead ringer. The combination of the easy-to-ride track and the fun-to-ride 125 was a hard combination to beat and I felt a little bummed having to share the bike with others!

Perhaps it was the crisp ring of a Husqvarna two-stroke, perhaps it was the Carlsbad course, or perhaps it was the company of heroes such as LaPorte, Jim Gibson, Larry Roeseler, and Gary Jones… but I felt inspired to turn some quick laps at The Ranch that day-–a day that brought a blast from the past into the present and shined a little more light on the future of Husky.

Here's Wallenberg on a Husky at the original Carlsbad track. In 1975!