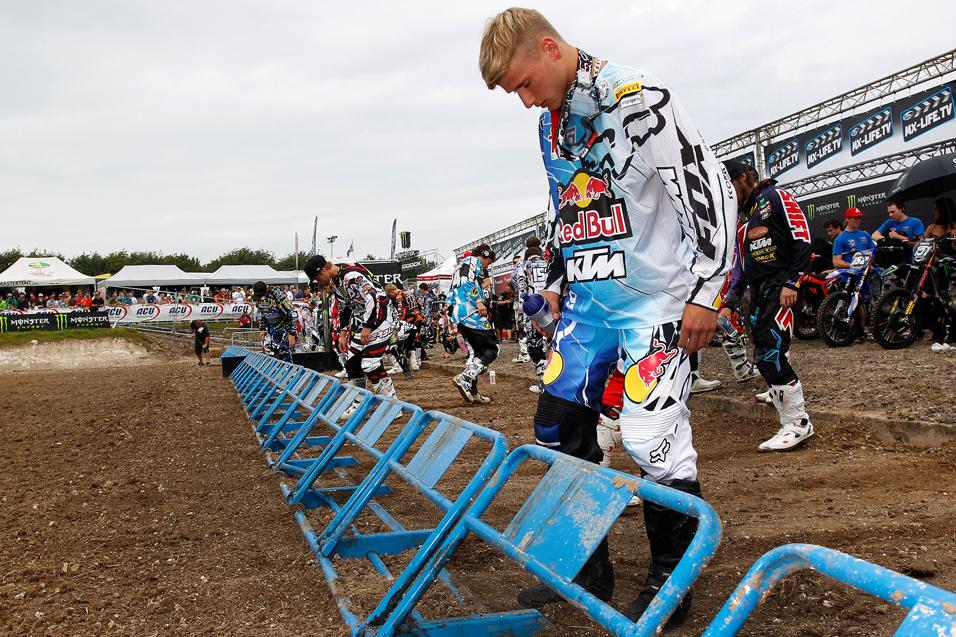 August 22, 2011 10:40am
by: Adam Wheeler
The British Grand Prix escaped the threat of a notorious English summer and the packed Matterley Basin circuit saw the factory Red Bull Teka KTM duo of Tony Cairoli (MX1) and Ken Roczen (MX2) grab victories together for the third time in thirteen rounds in 2011; Cairoli taking the 350SX-F to his fifth success and Roczen his seventh for the year and sixth from the last seven events.

In terms of the championship picture these were crucial triumphs with two rounds and 100 points in Germany and Italy (coming up in the next three weeks) left to run. Roczen is close to becoming the first world champion for his country for 43 years (since Paul Friedrichs on a CZ in 1968) with a 43-point margin over teammate Jeffrey Herlings who faltered in the UK with a qualification crash on Saturday that left him deep in the gate-–he was fourth overall. Cairoli was by no means the quickest rider in England but grasped that vital second moto in a day of incident and drama. CLS Kawasaki Monster Energy Pro Circuit’s Christophe Pourcel delivered a sharp slap to the face of his critics with a performance right out his 2006-07 era and admitted that he was actually enjoying GP racing again, while Monster Energy Yamaha’s Steven Frossard will wonder quite how he didn’t win his third meeting of a fantastic rookie campaign in which he is now second in the standings and trails the imperious Cairoli by 82 points. 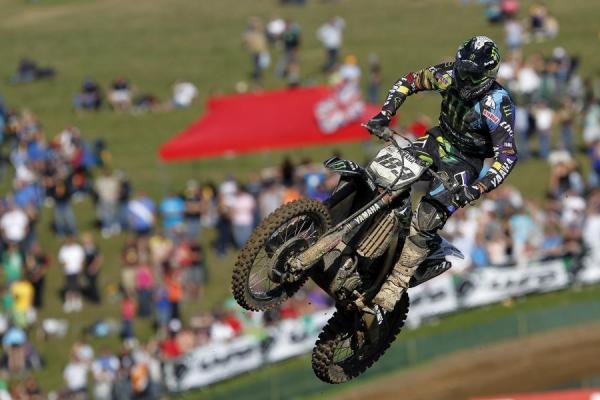 There was no surprise when Matterley Basin, host of the British Grand Prix for the second time and as an FIM Motocross World Championship venue after its inauguration in 2006, was given the thumbs-up as the best track of the season so far. “I opened the motorhome door and was like ‘wow, this is something special’,” said Roczen. “The jumps are big, but we can do them on a 250, it is fast but wide and a lot of fun.”

Five of the first twelve riders in the MX1 standings were on the sidelines for the trip to the UK. Four factory racers, Desalle, Philippaerts, Ramon and Bobryshev are out for the season with two injured in a Belgian Championship smash, one in a training fall and another from the GP of Limburg earlier this month. The absence of Desalle (broken left shoulder) and Bobryshev (cracked C7 vertebrae) brought to light the hazards of non-Grand Prix competition. It was no surprise to hear Honda World Motocross team manager Lorenzo Resta proclaim in Saturday’s press conference when Honda confirmed Goncalves and the Russian for another two years and also dropped hints about an innovative new CRF450R due to arrive in the next two months that they would be seriously reviewing the need for their riders to contest events outside of the world championship schedule.

The first MX1 moto saw a duel between Frossard and Pourcel with the former leading most of the way until he stalled the radiator-shroud-less factory Yamaha in a corner and Pourcel had the breather he needed for his first GP chequered flag in five years, and first race win since Unadilla in 2010. The track and better starts certainly helped Pourcel who provided a timely reminder of his talent already on Saturday with pole position, using that smooth, contained speed and invention with lines that nobody else would run. 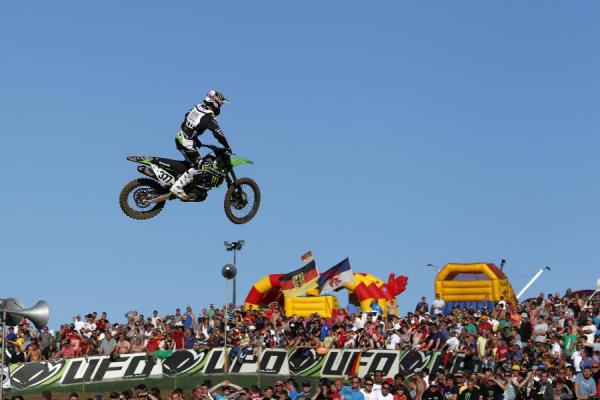 It had been five years since Pourcel last won a moto on the GP Circuit before winning moto one in Great Britain.
Photo: Ray Archer

The paddock drew a sharp breath after fifteen minutes of the second moto. Frossard was out front leading comfortably from LS Honda’s Shaun Simpson and new teammate Carlos Campano (the 2010 Spanish MX3 world champ deputising for David Philippaerts on the factory Yamaha and who would equal a career-best finish) only for the race to be stopped after a sickening collision between Tanel Leok and inspired wild-card Billy Mackenzie. The Scot, who is now plying his trade in the Australian series, had animated the home crowd by holding an unlikely third spot for half of the first race but could not avoid the Estonian who had tripled the quad while the Kawasaki rider had gone the full distance. Mackenzie looked unconscious from the impact with the TM and the Youtube video clip is almost as startling as Chad Reed’s recent memorable ‘flight’.

Moments earlier Xavier Boog was hospitalised with a possible vertebrae fracture that was later a false alarm. Mackenzie thankfully (amazingly) had no broken bones and an update with Leok is still pending but it seemed a sore back and concussion was the worse. Leok and Boog could potentially extend the injury crisis in MX1 come Germany.

The restart involved the full 35 minute and 2 laps duration and it was perfect news for Pourcel who had come up short on a table top on what he said was a ‘stupid’ crash on the first lap, damaged the KX450F and was storming through the paddock to his car when the team chased after him saying he had a second bite of the cherry. A rushed period of prep and 377 was behind the gate again; unfairly or not is a point for discussion. The ‘third’ moto was bad news for Simpson and Campano who did not reach the dizzying heights again and also Frossard who by the time he had dealt with Pourcel had to watch Cairoli escaping with the holeshot and overall; the Sicilian’s 3-1 outweighing Pourcel’s 1-3 and Frossard’s 2-2. Max Nagl was distant in fourth overall and newly crowned British Champion and GP wild-card Brad Anderson emphatically justified his Team GB MX of Nations berth with a hard-fought fifth.

The MX2 races were not nearly as watchable with Roczen in a league of his own and the main interest falling to CLS Kawasaki Monster Energy Pro Circuit’s Tommy Searle with his 2-2 run. The first moto charge from twelfth had the crowd cheering with every pass. “It was a great feeling,” he said. “I had to come back from twelfth and each time I made a pass I could hear them. At one point I had pins and needles; it was great to be a part of that.” 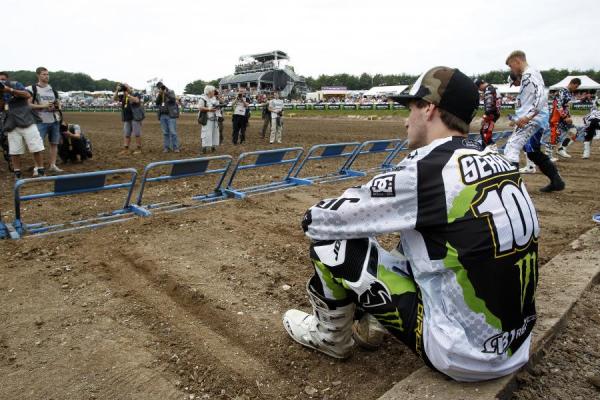 Technical problems ruined possible podium finishes for KTM’s Joel Roelants and Suzuki Europe’s Valentin Teillet while it is rumoured that the third member of the works KTM set-up, Jeremy Van Horebeek, has injured his shoulder for the third time this year. Team Belgium manager Joel Smets must be wondering where he will find a team for September 19th. Monster Energy Yamaha’s Gautier Paulin made the bottom step and the box for the seventh time in 2011 and this was due to a resilient pick through the field to 4th in the second moto after a start that left him outside the top thirty. Max Anstie will undoubtedly sleep well after this meeting, after a blown engine on Saturday meant last pick in the gate and he worked all day long off the radar but diligently to take eighth at his first home Grand Prix.

Zach Osborne was expected to be back in play for his Bike it Cosworth Wild Wolf Yamaha team’s home event but his shoulder is still not sufficiently strong to consider a return to the bike.

The old school Gaildorf circuit will be another cauldron of attention for Roczen in two weeks time before the breath-taking setting of Fermo will bring the championship to a close for the second year in succession. 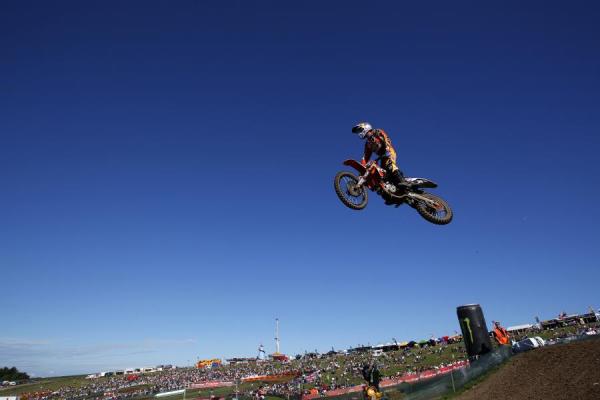