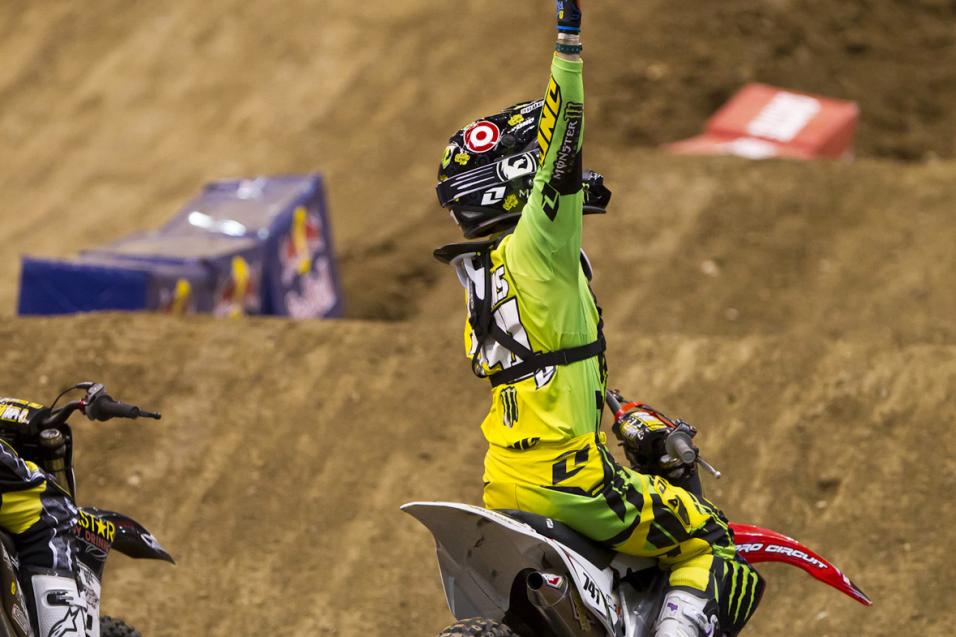 Advertisement | Advertise with Us
X-Games Seventeen has come and gone already and as usual, the program featured plenty of two-wheeled mayhem. One competitor who definitely stood out was Nate Adams, who won gold medals in Moto X Freestyle and Moto X Speed & Style, and took sixth in Moto X Best Whip. We caught up with the freestyle superstar to get a firsthand account of how a double-gold weekend feels.


Racer X: Congrats on the X Games, it was a big weekend for you.


Nate Adams: Yeah, it was, a really big weekend for me. Thank you.


How many medals is that for you now?
I think that makes twelve. 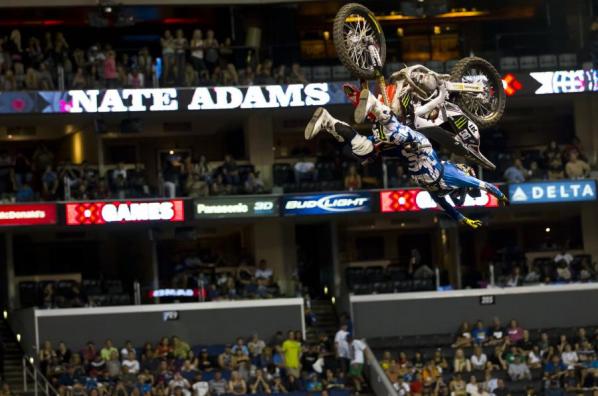 
Take us through a quick breakdown of how your X-Games weekend went.
Pretty much it went great, I couldn’t really have asked for anything better. I was a little nervous with the freestyle course being in a small arena, I tend to do better on bigger courses where there’s more options and transfers. I got in the best whip at the last minute, and just decided to have fun with it and ride it for a warm up. I did that, and had fun. That was Thursday, freestyle was Friday. Practice went good. We had 60 second runs, and we had it down to my seven or eight biggest tricks, and I just concentrated on doing solid runs. Everything was best out of three runs, so you had to be consistent and do multiple good, solid runs. I did that and won freestyle and kind of couldn’t believe it. Everyone was kind of just messing up, and I just had solid runs. With Speed and Style it was the same thing. I qualified first in time and style, and was kind of surprised, especially on the time. It was a whirlwind weekend, everything was just clicking and working for me, and I just kept moving forward and pushing and pushing. It came down to the last race with Mike Mason, and I knew he was an Arenacross and Supercross guy, so I wasn’t going to try to pass him or get aggressive. I was just going to try to stay close and do my tricks as smooth as I could. I did it, won gold, and I couldn’t believe it. A couple golds, it hasn’t even sunk in yet!


You mentioned having the freestyle course in the smaller Staples Center this year instead of the Coliseum. Did you have to change your routine up to compensate for the tight quarters, or was it business as usual?
Well, it was business as usual, but there were no wall rides, quarter pipes, rails, or any of that stuff, so I went back to a more basic freestyle run where I could just concentrate on my tricks. That kind of made me nervous because guys like Andre Villa, Adam Jones and Twitch, they have really good tricks. With an arena course, it’s just straight jumps and tricks. No one is going to do a transfer line that no one else has the guts to do, nothing like that was going on. The month before I prepared for that, and worked on getting my tricks buttoned up a little tighter, holding my legs straight and together, hands out straight, body straight, just working on trying to be more perfect on everything.


What are your thoughts on the fans determining the winner of the best whip? It seems like it’s a great way to get the fans involved, but do you think it’s fair to the riders?
No I don’t. I was expecting to have fun, throw my gloves up on TV and get a little love on camera, but it’s a professional contest. X Games is a huge deal for a lot of riders, and it’s the only deal for some riders, it’s the only time they have a chance to shine. They could be a good freestyle rider, but their whip is what stands out, and putting it in the hands of who’s tweeting the most about it, who has the most sponsors, and who’s getting the social networks going. It’s a professional contest, and should be judged like every other thing on the X Games; by a panel of professional judges. It’s just too important, I feel. It’s a great way to get the fans involved, and they should do that. They should do that on more events at X-Games, but also have a panel of professional judges which really counts for the scoring, but also have a fan favorite vote to keep the fans involved. It’s cool, it’s fun, and it’s fun for the riders to know who the fan favorite is. Some of the guys who don’t finish in the top three every time have more fans than the guys who do, so it’s a great way for them to know their fans are following them. But for the final decision on who gets the medals, it needs to be a panel of judges in my opinion. I’m not saying the guys who do well don’t have a great whip, they do. The scores could have been in the right order, the fans might have gotten it right. But, why leave it up to that? It’s such a big deal to some of the riders for their livelihood, their income, as well as a little bit of pride and bragging rights. It’s too big of a deal to leave solely in the hands of the fans I believe. 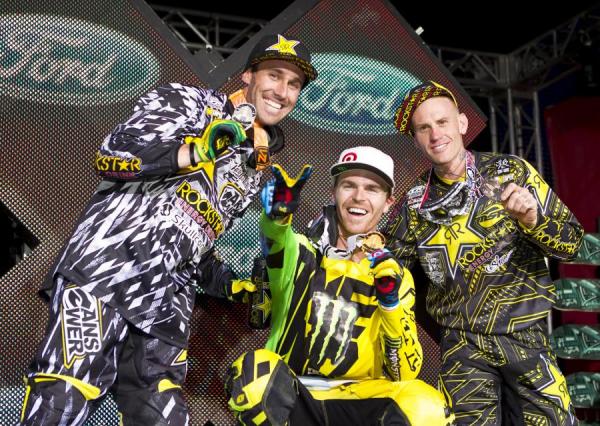 Adams (center) won Gold in Moto X Speed and Style.
Photo: Garth Milan
Do you have any plans to compete in best trick in the future?
You know, I wanted to do best trick, but it seems like they keep letting whoever has the newest biggest trick in. I don’t think I would have medaled, I think I probably would have been in the back like I was in best whip. I have 360s and one-handed takeoff flips and stuff like that. I’d love to ride it, but it’s usually filled up with guys that are trying something brand new and crazy. If there’s ever an opening, I’ll take it, but it seems to always be filled.


You have to be prepared to pull something gnarly if you want to win that competition, that’s for sure.


Yeah. It went front flip, double back, and double back this year. Double back flip nac nac took silver, and a double back got bronze, so it’s pretty steep competition for best trick. You gotta be on point for that stuff. It’s not something I’m going to get the word a week beforehand and try a few double flips and go try it on dirt, that’s how you get hurt. But if I ever get in, I’ll put time into something new and try it for sure.


What’d we miss?
I’d like to thank all of my sponsors, all of the Deft Family fans on Twitter and Facebook, and everybody out at the X Games and Staples Center cheering for us and having our gloves on, that was dope. The support and response that we’re getting is great, so thanks to everybody.


Thanks for your time, and congrats once again on a great weekend!
Presented by:
Read Now
November 2020 Issue Now Available