and Xbox LIVE Arcade in Summer 2011

Los Angeles, CA– –On the heels of the excitement of the Lucas Oil Off Road Racing Series (LOORRS) event at the Glen Helen Raceway in San Bernardino last weekend, 2XL Games revealed more information and a first look at its upcoming video game Jeremy McGrath’s Offroad. Highlighting seven-time AMA supercross champion Jeremy McGrath’s latest venture into four-wheel off road racing, this high-octane, track-tearing racer will speed onto consoles this summer from Reverb Publishing on PlayStation®Network and on Xbox LIVE® Arcade for the Xbox 360® video game and entertainment system from Microsoft from D3Publisher.

“I’m a huge fan of gaming and always have been, and being able to represent my transition from Supercross to off road racing in a game is an awesome opportunity,” said Jeremy McGrath. “Having seen the work that 2XL Games has done with racing games in the past with Rainbow Studios and more, they are the perfect team to work with to create a fast-paced, intense racing experience that I know fans will love!” 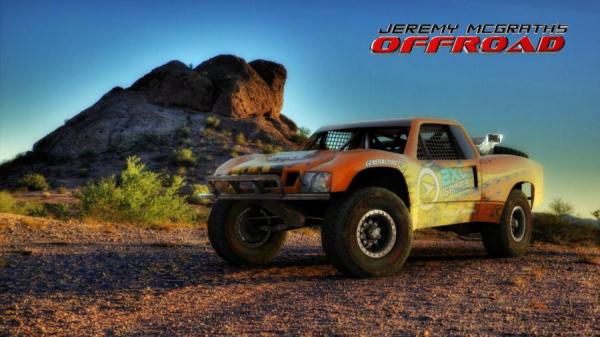 In Jeremy McGrath’s Offroad, players race four-wheeled 800 horsepower off road race trucks with tons of options including a host of tracks, single-player and multiplayer modes as well as a wide loadout of

vehicle classes including Rally Cars, Pro Buggies, and Trophylite Trucks, all in crispy 1080p, 60 frames per second presentation. With multiplayer support for eight racers, and a full career mode that follows

Jeremy’s off road racing endeavors, Jeremy McGrath’s Offroad will be the title that both 2-wheel and 4-wheel racing fans will want to get their hands on this summer!

“Jeremy McGrath is one of the most recognizable names in racing, off-road or otherwise, and working with him on this title is a dream come true for the team at 2XL Games,” said Robb Rinard from 2XL

Games. “Having his support and his input on this racer is a huge boost for the team.”

2™. For more information about D3Publisher and its products, please visit: www.d3publisher.us.

All other trademarks are the property of their respective owners. All rights reserved.