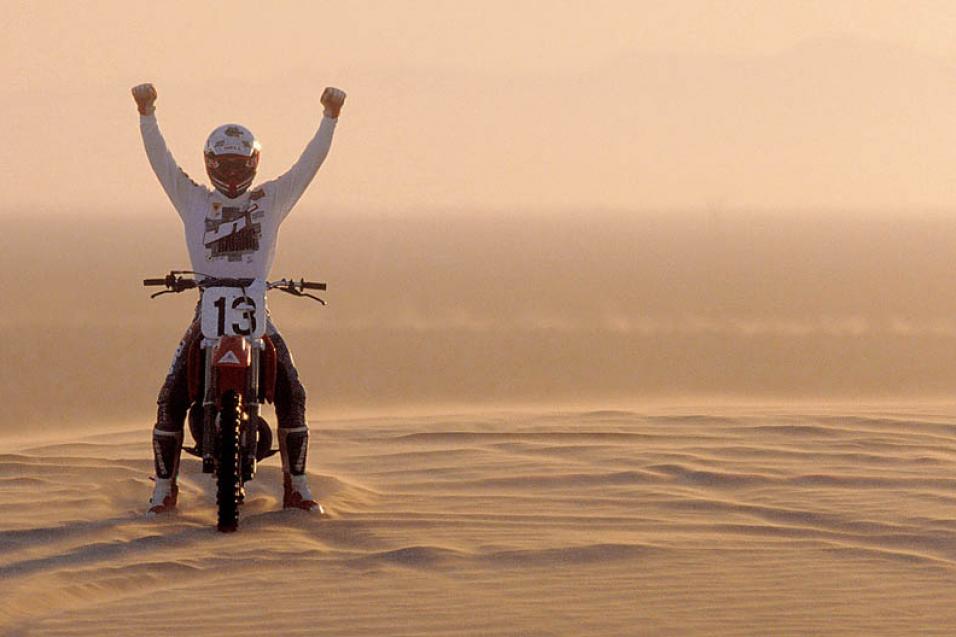 We arenow 21 days away from the kickoff of the 2011 Lucas Oil AMA Motocross Championship, the 40th Year of the American Motocross tour. Racer X Online is counting down the days one year at a time, and today we look back at 1990.

(If you missed any of the previous years, please check here)

1989 was a tumultuous year in the sport, and 1991 would see the status quo turned completely upside down. In between, however, was something of a quiet interlude. As time went on, it became apparent that Ricky Johnson's wrist injury was not going to go away anytime soon. We now know how devastating a broken navicular can be in large part because that's what happened to Johnson, at that point the most successful motocross rider America had ever produced, with records in a shorter span that surpassed those of Bob Hannah himself. 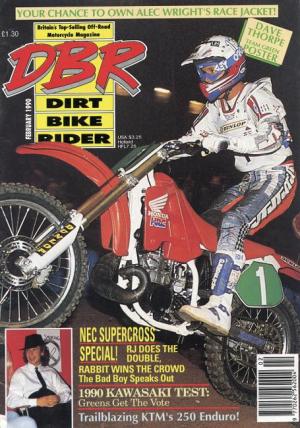 Rick Johnson hoped 1990 would see a return to his previous form. But his wrist would not allow it.

So the torch that had been passed in '89 remained firmly in the hand of Jeff Stanton, and he rode the #1 Honda with pride. After starting out slowly in AMA Supercross—Yamaha's Damon Bradshaw absolutely blitzed the field in his first two main events as a full-time 250 rider—Stanton settled in and began his long march to a second straight title. Along the way were one-off wins by guys like Larry Ward (in his hometown Seattle Kingdome) and Jeff “Chicken” Matiasevich (in his adopted favorite city of Las Vegas), plus an amazing victory by Jeff Ward in the now legendary “Battle of Atlanta,” not the last win of Wardy's career but certainly one of the biggest ones.

The mercurial Bradshaw would take five wins in the series, but the man that was closing in fast on Stanton at the end was Jean-Michel Bayle. The Frenchman was finding his speed and comfort zone in the stadiums, and he seemed to get faster by the race. He did not win until the ninth of 18 rounds, and then he reeled off five wins in seven races on the #22 Honda. He closed in on Stanton, but then the Wolverine hunkered down and did what he had to to secure another title. He won by seven points (329 to 322) over JMB after Bayle nearly won the season-ending LA Coliseum race, only to be checked up by Bradshaw behind the peristyle. 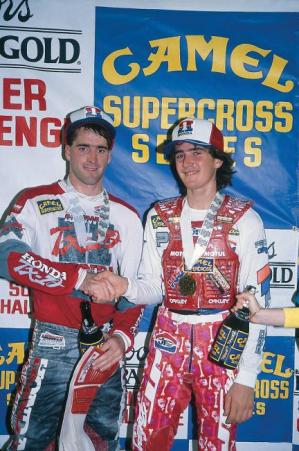 Stanton and Bayle were still getting along as Honda teammates in 1990. That wouldn't last..
Courtesy Moto Verte

Honda dispatched Bayle to the 125 class to try to keep its streak there going. It had been since Jeff Ward in '84 that a brand other than Honda won the 125 National Championship, and the team felt comfortable enough about their chances—they also had the defending champion in the class, Mike Kiedrowski, under the tent—to let Guy Cooper go. That would prove to be a big mistake, especially after JMB, up by 74 points by the time the series reached Washougal, broke his arm in the whoops.  Kiedrowski then picked up the slack, trying to reel in Cooper, who had won four of the early rounds on his Suzuki RM125. Cooper later had some help from his Suzuki teammates Mike LaRocco and Larry Ward, who had raced the 250 Nationals and the dropped back to the 125s once the 500 series started—Suzuki was no longer producing an RM500.

It came down to the last round at Unadilla, and the “MX Kied” had a shot. But that day Cooper put it all together to win not only the last round but the championship title by a single point—the only championship in the highly popular Air Time's career. Cooper had toiled for years as a privateer before finally netting factory help. He never gave up on his quest for the title, and for one of the all-time fan favorites of the tour, the 1990 championship was an emotional one. It also marked Suzuki’s first title since Mark Barnett in 1982. 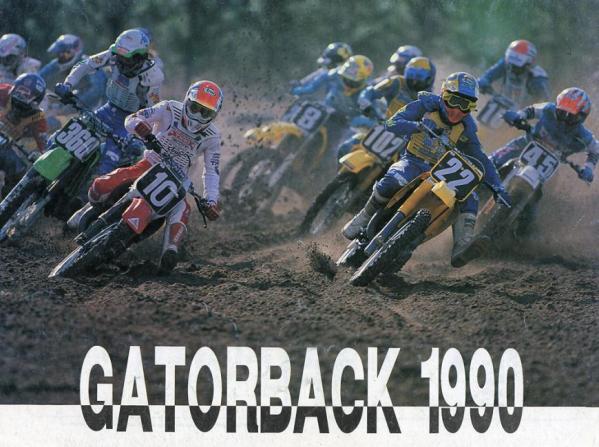 The 250 AMA Motocross tour started out with a cool moment, as Johnson, having struggled through the stadium tour, blocked out the pain and found his old speed again. RJ won the opener at Gatorback (which was held the first Sunday of March) with Stanton right on his rear wheel the whole time. But then at the Daytona SX one week later Johnson hurt his wrist again. He was knocked out of most of the summer's races, but he came back for one more amazing moment: Ricky Johnson won the season-ending Unadilla 500 National, the last win of his Hall of Fame career. It was the last National Johnson would ever compete in.

Unlike the ’89 season, Stanton was not in command in the 250 Nationals—Jeff Ward won four of the seven rounds—but he rode a smart, calculated series and took advantage of Wardy's breakdowns to win his second straight title here by seven points (301 to 294). But then the tables were turned in the 500 class as Stanton was in control for the first three rounds, but then he crashed at Steel City on the uphill rhythm section and suffered a concussion. That gave Wardy the gap he needed, and the Kawasaki rider would net his seventh and final AMA Championship in the 1990 500 class. 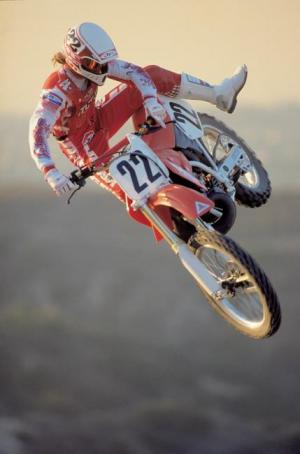 Bayle led the 125 Nationals by a large margin but crashed and broke his arm at Washougal. Guy Cooper kept charging and landed his first National Championship.
Courtesy Moto Verte

Ward, Stanton and Bradshaw teamed up for the Motocross of Nations in Vimmerby, Sweden, but this would turn out to be one of the toughest weekends ever for Team USA. Bradshaw had moved to the 250 class for ’90 but dropped back to a 125 for the MXdN. It didn’t go well, as Bradshaw struggled to find the pace on the smaller bike, and then crashed out of his second moto, leaving the track on a stretcher. Ward had troubles on his 500, too, blowing out a rear shock. It would come down to Stanton, riding the wheels off of his CR250 in a come-from-behind effort in the final moto to steal with win for Team USA by a single point. After nearly a decade of des Nations dominance, it appeared the European nations were beginning to find some chinks in Team USA’s armor. And with the win streak growing larger each year, so did the pressure to not be on the American team that blew it.

Meanwhile another talented American was taking Europe by storm. Donny Schmit was one of the fastest rising stars in American Motocross won he placed second in the ’88 125 Nationals behind veteran George Holland, but his contract negotiations with Suzuki broke down at the end of the season. Schmit ran the ‘89 125 Nationals as a privateer Honda rider and finished an very impressive fourth. But back then, that still wasn’t enough to net another factory ride, so he headed to Europe to ride factory Suzukis there. In his first year overseas, he landed the 1990 125 GP Title. 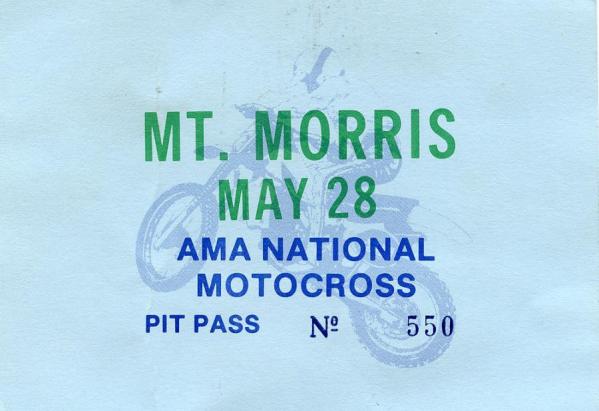 Pit pass for the 1990 High Point National.
If you try to use a copy of this to sneak in this year, they're gonna' know.

It was obvious by the end of the year that big changes were coming. Bayle was getting faster, as was Bradshaw, and Ward and Johnson and veterans like Johnny O'Mara were starting to slow down. The changing of the guard was upon the sport—a kid named Jeremy McGrath won the Las Vegas 125 Supercross main event on the #125 Kawasaki KX125, and down in Florida a befreckled, chubby little Team Green rider was blowing people's minds with his aggression and speed—but those are stories we will tell later on in this 40-Year Countdown for American Motocross!