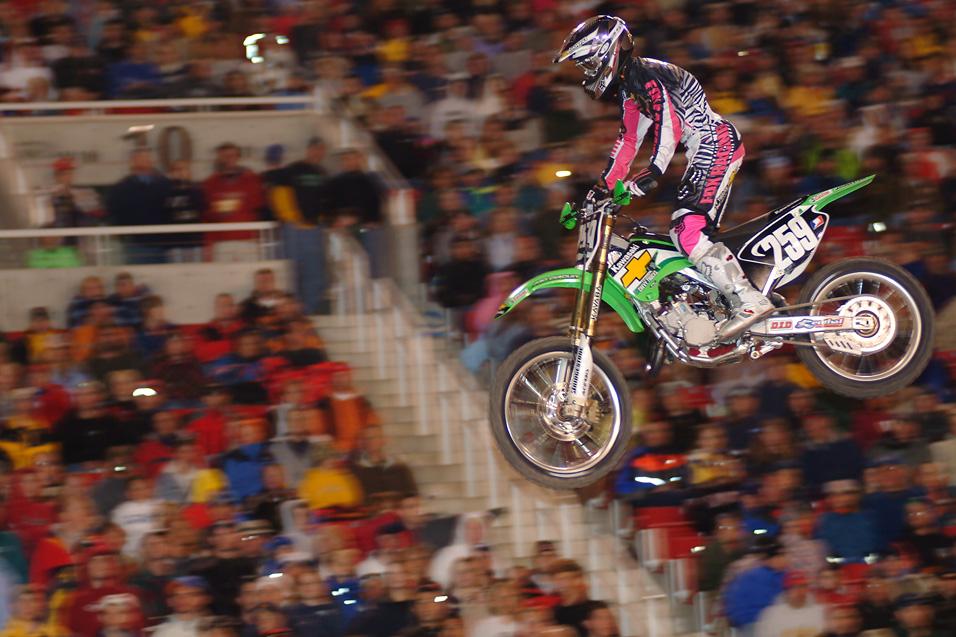 April 28, 2011 4:25pm
by: Steve Matthes
Rice-eccles Stadium Salt Lake City, UT Salt Lake City Monster Energy AMA Supercross Championship
The 2011 Monster Energy Supercross Series picks up this weekend in Salt Lake City, Utah after taking a one-week break for the Easter holiday. The capital city of Utah has been on and off the supercross tour over the years as it debuted in 2001, went for four years and then took a five-year hiatus from the tour. The race came back in 2009 and it’s been a special place for the green crew. All told, out of the twelve main event winners at SLC (6 supercross class and 6 Lites class), Kawasaki has won five—more than any other manufacturer.

For This Week in Kawasaki SX History, we’ll take a look back at one of the more dominating wins for Team Green at the Salt Lake City Supercross. 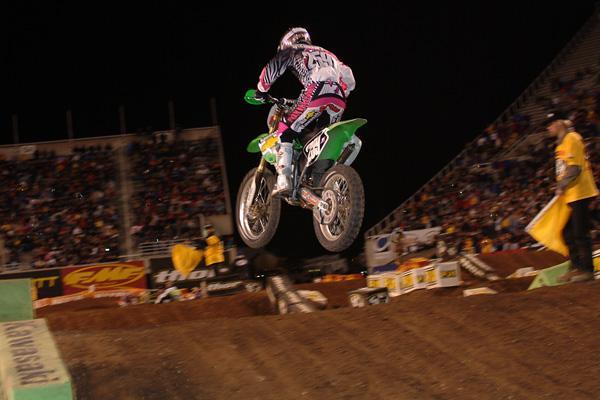 The Rice-Eccles outdoor stadium has been the venue for every race held in SLC and oftentimes the weather and the altitude have been the racers’ biggest obstacle as opposed to the other racers. In 2003, James Stewart came into the main event as a man that had already clinched the 125 West Region Championship, as the rider in second place, Travis Preston, was out with an injury.

There was nothing on the line for the number 259, but he went out there and crushed the rest of the competition for the seventh time in eight races (Preston won round one). Stewart had in fact led 100 out of the 105 laps since Preston’s win.

Stewart got a second place start on his KX125 despite being down on horsepower (compared to the four-strokes that he was racing against) and at altitude. But he quickly moved into the lead in the first rhythm section and it was nothing but seconds put on after that. 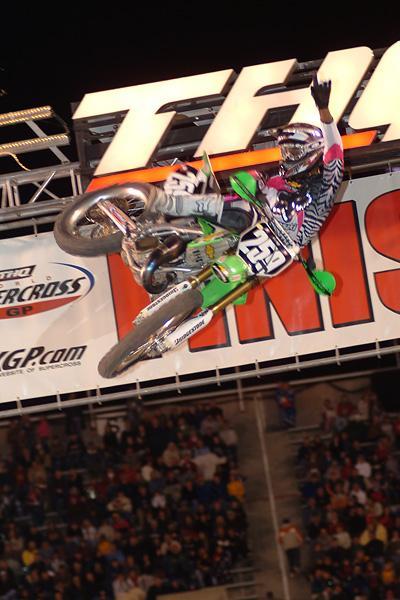 Wearing his trademark Fox pink and zebra-striped gear, Stewart effortlessly attacked the Salt Lake track and started pulling away and looking toward the finish. At one point near the halfway mark, Stewart had some twenty-seconds on second place and started backing it down from there. Soon, with four laps remaining, Stewart was doing clickers and one-handers for the crowd. Like he had been in so many other races earlier this year, he was the first rider to get the checkers in another dominating fashion.

With Preston missing the race, Stewart finished the west region series with a crushing 58-point lead and added to the record books in that class. The world waited for James to make the step up to the supercross class and soon enough, they would get their wish.

But on this night, it was a Kawasaki leading the way in the 125 class.