Media Day for this weekend’s action takes place on Thursday, March 17 from Noon-2:00 p.m., featuring San Manuel Yamaha, Suzuki City and BBMX/Palmetto Suzuki. Riders will be available for interviews and will ride the track for the media.

Villopoto’s performance last Saturday also marked his championship-leading fifth win of the season. After moving into the lead before the completion of the first lap, Villopoto pulled away from the field with a wire-to-wire win to give him his second straight win inside Lucas Oil Stadium. Currently, Villopoto’s advantage over San Manuel Yamaha’s James Stewart in the Supercross class standings sits at 26 points.

“The track was really tough tonight,” said Villopoto. “The ruts played a big factor throughout the 20-lap main. You really had to be smart out there. The whole team worked together really well tonight, and I couldn’t do it without them.” 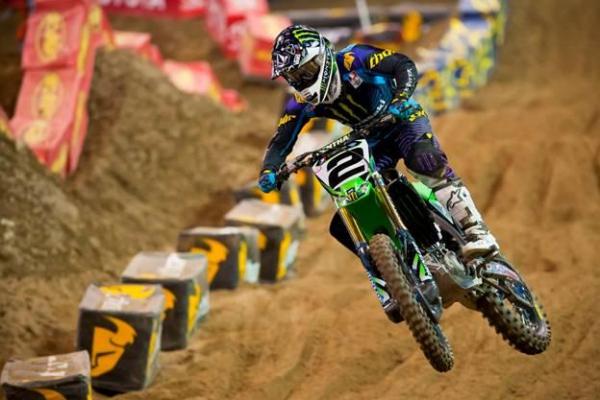 Monster Energy Kawasaki’s Ryan Villopoto will look to keep the momentum going heading into Jacksonville, where he took the victory one year ago.
Photo Credit: Hoppenworld.com

After a difficult outing in Daytona the week prior, Stewart rebounded with a strong runner-up effort at Indianapolis, giving up minimal points to Villopoto. The 20-lap main event was full of excitement for Stewart, coming from dead last off the start and overcoming a pair of near-crashes to work his way through the field and a return to the podium.

“I had a rough weekend last week and wasn’t able to ride the way I wanted to,” said Stewart. “I let my team down today. It’s not over. I’m so motivated right now and I have a bunch of guys behind me.”

Stewart was the inaugural winner in Jacksonville in 2009, the year of his last world championship. With good fortune on his side, EverBank Field could serve as the place for him to begin his pursuit of Villopoto.

Rounding out the Supercross class podium in Indianapolis was TwoTwo Motorsports/Bel-Ray Racing’s Chad Reed. Since capturing his first win of the season in San Diego four weeks ago, Reed has been a podium fixture and is just three points behind Stewart in the standings. 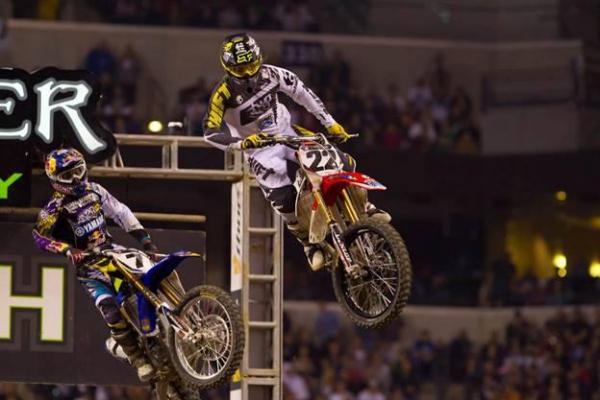 In the Eastern Regional Supercross Lites class, DNA Shred Stix/Star Yamaha’s Ryan Sipes became the fourth different winner in as many races. A longtime veteran of the sport, Sipes’ breakthrough victory was the first of his professional career. Adding to the special nature of Sipes’ win was the presence of family and friends in the stands as Indianapolis marks the adopted home race of the Kentucky native.

“I can’t even describe the feeling right now,” exclaimed Sipes. “I didn’t think about winning until I crossed the checkered flag. Last time I thought about taking first place while leading, I went down and handed over the lead. Tonight, I stayed strong and didn’t think about it, and it definitely paid off.”

The parity-heavy title fight has featured exceptional racing throughout its first month of competition and at this point, the championship is anyone’s to win. On Saturday night, GEICO Honda’s Justin Barcia maintained his points lead with his fourth podium effort in second while Monster Energy/Pro Circuit/Kawasaki’s Blake Baggett also kept his podium streak intact in third. For Baggett, the night was one of frustration after crashing out of the lead on the seventh lap of action.

“I went six laps and got pressured and went down and pretty much threw the race away, said Baggett. “I threw away a good amount of points, but we’ll just make sure we pick it up down the road.” 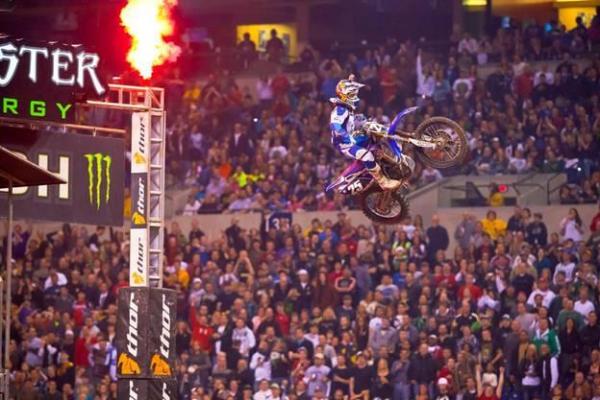 Currently, Barcia holds a six-point lead over Baggett in the standings with Sipes moving into third after his win, an additional six points behind.

Last year in Jacksonville, Villopoto grabbed the holeshot and went on to take a wire-to-wire win as he chased down Rockstar/Makita Suzuki’s Ryan Dungey for the championship. In the Supercross Lites class, eventual champion Christophe Pourcel grabbed a convincing victory.

Tickets are available at the EverBank Field Box Office, SupercrossOnline.com, all Ticketmaster retail locations, charge by phone at (800) 745-3000, or online at www.ticketmaster.com.  Practice and qualifying begins at 12:30 p.m., and the main event begins at 7:00 p.m.  Club Level Seats are available for $45 Adult/Child; Non-Club Level Seats $20 Adult/Child.  Fans can also get into the Pits for FREE from 12:30 – 6 PM Race Day when they recycle a MONSTER Energy Can at the stadium Pit Entrance (valid only with event ticket).