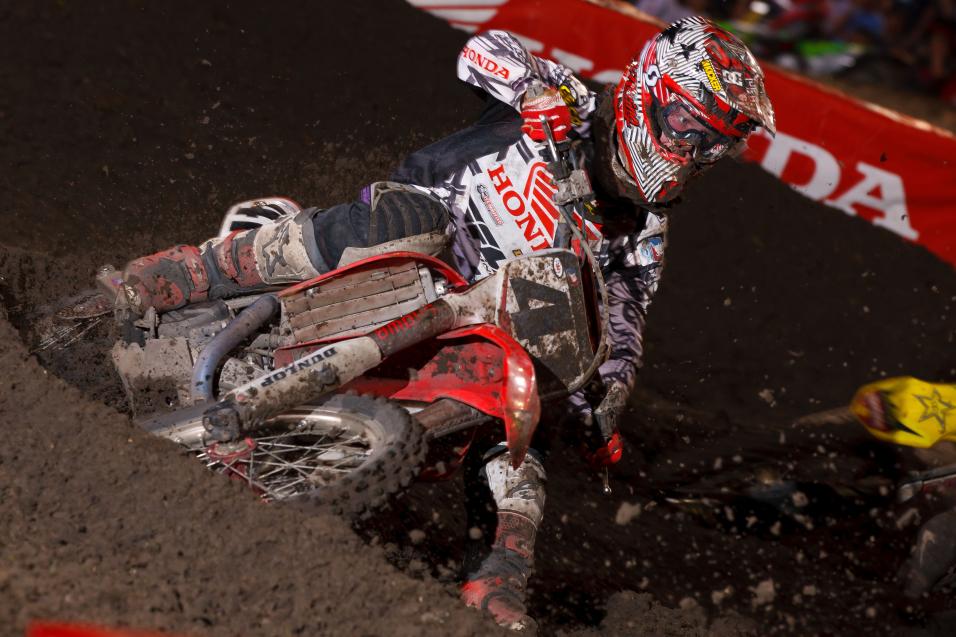 In a sport where tenths of seconds determines whether or not you win a race or become a champion, three weeks seems like light years away. But when you really break it down, it’s only 21 days.  American Honda’s Trey Canard has been on enough of rollercoaster ride for his last 21 days that it would send most people to the funny farm.

After taking home his first career victory at Houston, Canard led at San Diego—only to drop the front-end and finish fourth—and was in third in Atlanta before again making a mistake and taking home a fifth. Then the mother-load dropped on the young rookie this weekend. After a disappointing start, Canard slid the front end out early and unintentionally collided with Ryan Dungey and Ivan Tedesco—sending Canard to the back of the pack. Canard would rebound and work his way into the top-ten, only to have Brett Metcalfe make a mistake, leaving Canard nowhere to go but right into the back of his bike. This left Canard in obvious frustration with a thirteenth place finish. 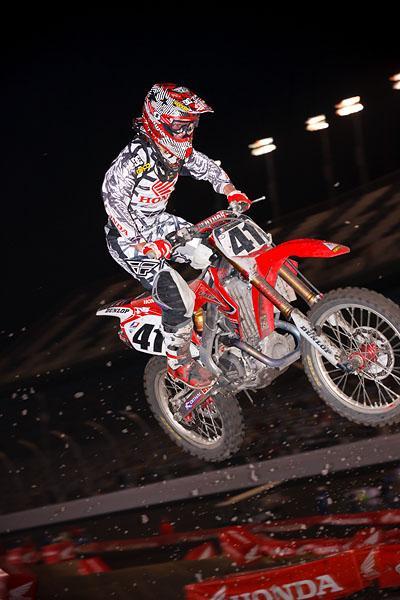 Now 42 points back, Canard seems all but out of the championship hunt.
Photo: Simon Cudby

Now Canard sits in what seems like an insurmountable 42 point hole from point’s leader Ryan Villopoto. But let us for a moment play the “what if” game. What if Canard had not swapped the front end at San Diego and held off Chad Reed for his second consecutive victory? Go ahead and add seven more points to Canard’s total.

What if Canard had not crashed in Atlanta and played the role of Ryan Villopoto. Sitting, waiting patiently behind the Reed/Stewart showdown, and then taking home his third consecutive victory after they crashed? This might just be wishful thinking, but it’s not entirely out of the realm of possibility. If Canard had won three straight before heading into Daytona, the message boards would be blowing up faster than a Charlie Sheen…ah, a little to early for that one.

At that point, the 2010 Dungey/2011 Canard comparisons would be through the roof. With that much confidence in the books, things may have even played out differently in Daytona. But the reality is, Canard has made the mistakes rookies make, and now he (unless he can pull off a miracle) is out of the championship hunt.

Of course, you could play this game with all the top contenders and come out with the same scenario. Stewart, Reed and Dungey all have races and moments they wish they could take back. So before we hand over the title to Villopoto, remember, this is Supercross, and anything can happen in a matter of weeks.