Few riders had an answer for the strength and raw speed of Mount Maunganui’s Cody Cooper on Sunday.

This season’s Demon Energy New Zealand Motocross Championships edged past the halfway stage with the second round of four in the series at Patetonga, just outside Morrinsville, on Sunday with Power Balance MotoGB Suzuki’s Cooper racing to 2-1-1 results in the glamour MX1 class, beaten only by Rotorua’s Michael Phillips (Honda Hamilton) in the day’s opening race.

However, it did little to alter the position at the top, where former Grand Prix star Josh Coppins (MXDK Rockstar Yamaha) used his many years of world championship experience to “limit the damage” and actually extend his overall championship lead. 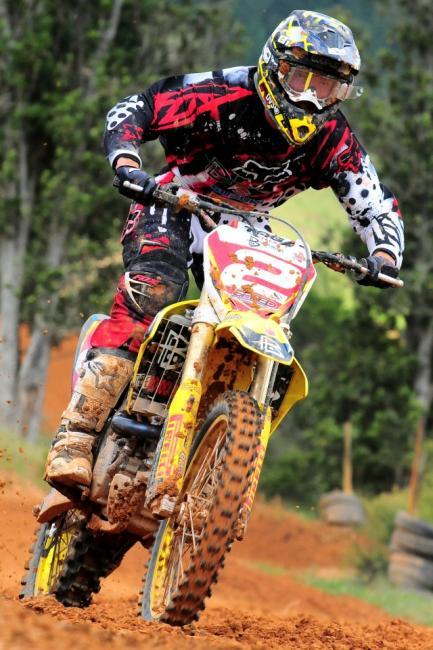 Coppins finished 3-2-2 and was runner-up for the day, while Phillips could consider himself lucky to take the third podium spot after a day of mishaps.

So now, instead of enjoying a three-point lead at the top of the standings over Phillips, Coppins now celebrates a six-point lead over new No.2 man Cooper, with Phillips slipping to third in the championship chase, eight points further back.

There was also a shake-up in the MX2 class where 42-year-old veteran Darryll King ((MXDK Rockstar Yamaha) won the day, edging out the two “star” Australian visitors – Cody Mackie (Timaru Honda) and Daniel McCoy (Power Balance MotoGB Suzuki) -- and raising the very real prospect that he could go on to win the title.

King finished 1-3-2 to shade McCoy (3-4-3) and Mackie (7-1-8) and move to the top of the standings, three points ahead of round-one winner Mackie and five ahead of McCoy.

In the 125cc class, it was a hat-trick of wins for Waitakere rider Ethan Martens (MXDK Rockstar Yamaha), the teenager extending his championship lead from a slender one point to 25 over fellow Waitakere rider Shaun Fogarty (CMR Race Team KTM), with Tauranga’s Scott Barr-Smith (Team JS racing KTM) equal second.

Fogarty had crashed during training mid-week and his subsequent shoulder injury meant he was unable to exhibit the blinding speed he’d produced at round one.

Meanwhile, Martens continues to lead the battle-within-a-battle for under-21 age group honours. In that separate competition, Martens is now 21 points ahead of Barr-Smith, with Kaukapakapa’s Josh Jack (BikesportNZ.com Colemans Suzuki) third overall.