Tucker Hibbert has been secretly riding an Arctic Cat Sno Pro 600 specifically tuned for one, unique event. Hibbert and the Monster Energy/Arctic Cat crew recently put the final touches on this snowmobile, strapped it in a crate and shipped it to Finland for the 2011 FIM Snowcross World Championship.

At the 2010 World Championship in Sweden, Hibbert became the first American to be crowned champion in the 11-year history of the prestigious event. Riders from at least nine countries are expected to travel to Tuuri, Finland March 26 to challenge the reigning champion. Immediately following the final event of the United States national tour, where Hibbert is currently leading both Pro points championships, he and his crew will travel to Finland for a week of testing and training at a private track. European snocross tracks are traditionally longer, rougher and more technical than U.S. tracks. Last year in Sweden, he looked right at home and made the adjustment quickly finishing 1-1-2 in a three-race format for the overall win.

In Finland, the event will again feature three, 15-minute races with an overall score determining the 2011 champion. Not only are European tracks dramatically different from those in the U.S., FIM has sound and fuel restrictions and does not allow the use of traction products.The Monster Energy/Arctic Cat crew gained valuable knowledge from the event last year and built Hibbert’s 2011 World Championship snowmobile with suspension adjusted for the rough race course, motor modifications to meet sound and fuel restrictions and removed the studs (metal spikes) from the track. Hibbert experienced an overwhelming welcome from Sweden last year and hopes Finland is fueled with the same passion for snowmobiling and racing.

For up-to-date information on his quest to defend his title, stay posted to www.tucker-hibbert.com.

Tucker Hibbert - #68 Monster Energy/Arctic Cat
“I’m really excited to race the World Championship in Finland and honored to have the opportunity to represent the U.S. and my sponsors overseas again. Last year in Sweden, I was overwhelmed by the fans.They have a serious passion for riding and racing.The energy at the 2010 World Championship was contagious and really lit a fire in me for snowmobile racing. It was one of the most memorable races of my career.

Since we (the team) have our first overseas racing experience out of the way, preparations are coming together much easier this year.The logistics alone are a lot to handle but we’ve made good connections since last year and it’s helped a ton. I really enjoyed racing on the European-style track in Sweden and hope Finland’s course will be similar. With the rough, long track and longer races it’s more like motocross than American snocross. It really divides the riders and makes it exciting for the fans. At the 2010 World Championship, I was surprised to see riders from so many countries. I had no idea that Italians raced snowmobiles! I hope more countries get involved this year and support the event.” 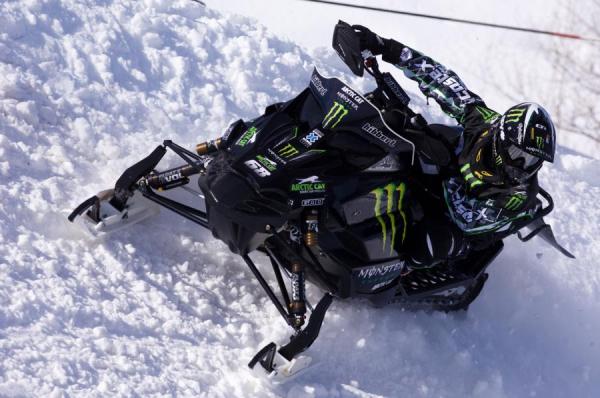