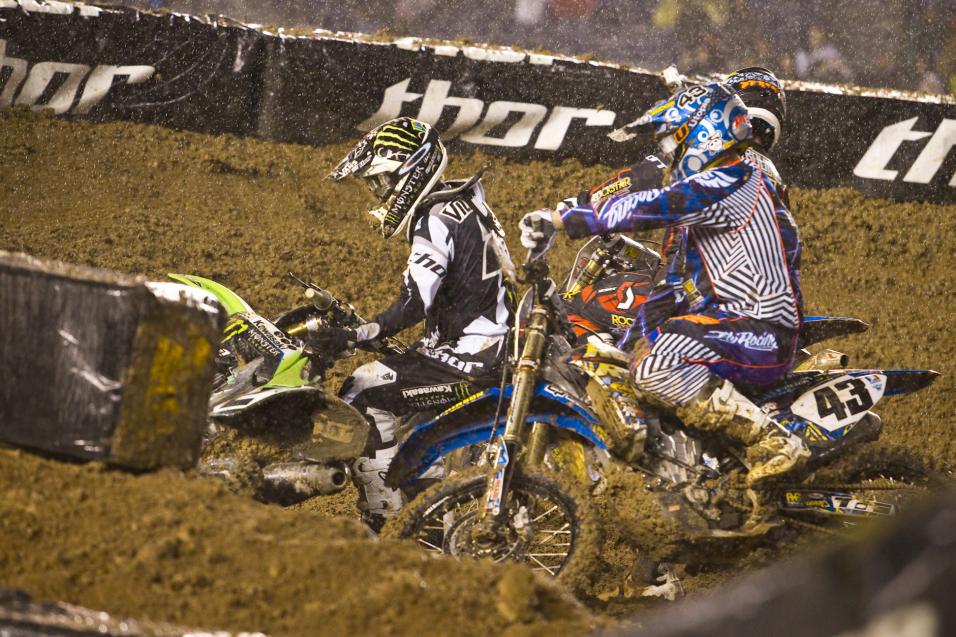 Advertisement | Advertise with Us
Qualcomm Stadium San Diego, CA San Diego Monster Energy AMA Supercross Championship
“A good start makes everything easy.” That was Ryan Villopoto’s outlook on Saturday morning as he stood  under the Kawasaki canopy, talking about what would likely be a slop fest that night in San Diego. Hours later, in his heat race, RV would show how true his own words were, and in the main, he would demonstrate just how hard a race can be if a rider doesn’t get a good start.

If you were watching the live coverage on Speed, following Racer X’s tweets, or reading Racer X Online, you already know how RV did in his heat. Villopoto grabbed the holeshot, and with an open track ahead of him, laid waste to the rest of the field. His pace was so furious that his average lap time was nearly a second faster than James Stewart’s fastest qualifying lap. True, the whoops were probably a bit smaller for the night show than they were during practice, but the track was also much wetter during the heats. A good start makes everything easy.

Considering the domination RV laid down in his heat race, it was easy to imagine him checking out for the win if he was able to get another holeshot. But, that’s not how the start of the race shook out for Villopoto. Instead, the beginning of the main turned out to be the moment that RV’s night officially went south. As the pack was disappearing in the first few sections, RV was on the ground, picking his bike up out of the mud. A bad start makes everything hard.

It’s not exactly the end of the world for Villopoto; he was able to charge back to seventh place (minus a front number plate and rear fender) and maintain a three point lead over Stewart, but a win in San Diego would have given him a fair amount of breathing room in the form of a two-digit lead. Instead, he’s back in the thick of an intense points battle with Stewart.