Zimmer won’t be racing this Saturday due an ankle break in early January.  However, Cody Robins, who Weinert refers to as the “Southern Express”, will be racing and representing the team in Houston.  As for Zimmer, he says he should be fully healed and ready to go by the second round in Atlanta.  Despite his injury, Zimmer has been training just as hard, almost taking advantage of the injury to strengthen his upper body and core.

Teammate Tyler Bright says he’s been training and working hard as well to get in shape, and also by putting plenty of laps in on the track to make sure he is “race ready come Houston”.  Bright says training at Weinert’s facility has been awesome because it’s enabled him to really focus on riding which means he is coming into this race season fully prepared.

“There’s nothing I haven’t worked on,” says Taylor Futrell, “starts, speed, training physically and mentally and putting in lots of riding time.”  Being at the facility has enabled Futrell to fine-tune his skills, putting him in a much better place this year then last.  Giving credit to the personal trainer that was hired for the team, Futrell along with Les Smith say they are in the best shape they have ever been in.  Says Smith, “fitness brings a lot of confidence for me…and that just carries over to the track.”

Throughout the team’s training, Weinert has shared with them past racing experiences and how he’s won championships.  “I talk to them about winning and only think of winning…when you’re training, riding, layin’ around-you know, 24/7.”  This is all part of the mental training that Jimmy firmly believes in and what makes going to the Weinert Training Facility a unique experience.  Weinert’s expectations for the season is to have all riders make the Main Event by the end of the season, and for the first round make top ten or the podium.  His team has set similar goals for themselves.  “My main goal is to get up there with the points, I’d be happy to walk away with a top ten this time around, and from there keep moving forward to be in the top five and get up there with those guys. The bikes are great and there’s no reason why I shouldn’t be [in the top five]” says Smith.

Teammate, Futrell, feels the same way - a top ten would be great, but a top five would be even better.  Futrell also wants to “stay safe” so he can continue to progress throughout the season and year.

While Jimmy Weinert may be too old to race, he’s “got some young bucks and the Southern Express ready to crush ‘em” The strong privateer effort of this team will greatly influence the future of Jimmy Weinert Racing. 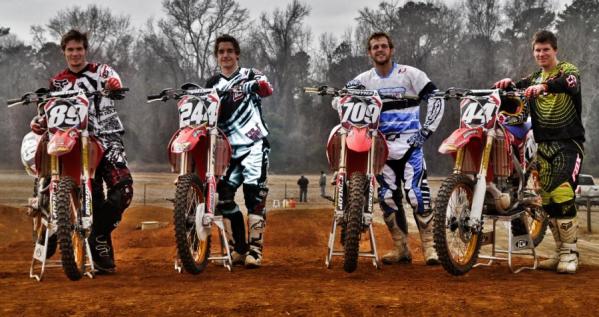