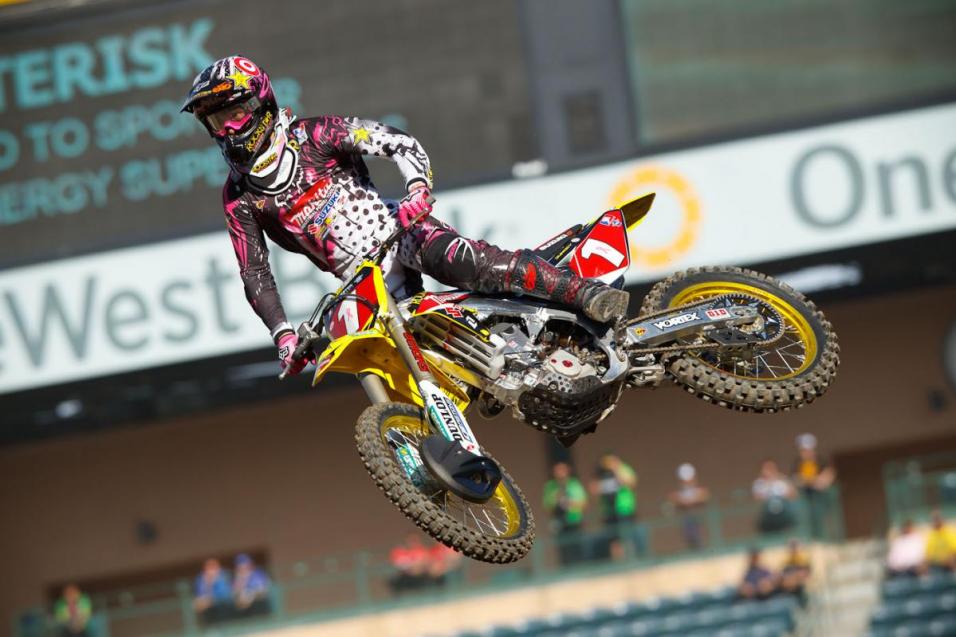 Monster Energy AMA Supercross is back in Southern California this weekend, and for the second time, the racers will be competing inside Angel Stadium in Anaheim. The track is the most interesting and technical one we’ve seen yet, and the tricky configuration will make for some of the longest lap times of the year. For a track report, go HERE.

The first round of the Lites timed qualifying sessions was largely uneventful. Josh Hansen was fast, and as usual, looked good in the whoops. He was also one of the first guys to start tripling through the rhythm sections on the first lap of free practice. But it was KTM’s pink-booted Ken Roczen who held the fast time early in practice, and it would be GEICO Powersports Honda’s Eli Tomac who would eventually lay down the fastest time of the session, a 58.314. Hansen followed with a 58.658, then Roczen (58.721), Cole Seely (58.916), Kyle Cunningham (59.207). Martin Davalos (59.343), and Broc Tickle (59.360). Daniel Blair suffered a nasty crash right after a triple jump during free practice, and was lying on the track for a good 10 minutes before he was hauled off on a stretcher. We’ll tweet (follow us @racerxonline) more updates as they become available.

The second Lites session had a little more action than the first. Roczen and Travis Baker both held fast times, but soon Hansen climbed into the lead with a 57.560. Then, the wheels came off for Hansen. Well, not his wheels, but his rear fender and front number plate did indeed come off when Hansen experienced a bad crash in the whoops. Hansen sat hunched over for several minutes, and was eventually hauled off in the Asterisk Medical Mule. Amazingly, Hansen still set the fastest lap time with a 57.560. Davalos followed with a 58.587, then Tomac (58.657), Cunningham (58.697), Roczen (58.841), Tickle (58.976), and Seely (59.015). Check out second through seventh; the times are less than half a second apart!

When the 450s came out for the final qualifying session, Chisholm didn’t look like he was experiencing any ill effects from his earlier crash, and he set the first fast lap. What followed was nothing short of a game of musical chairs for the fastest lap between Dungey, Canard, Villopoto, and Chisholm. Yep, Chisholm! Canard had a brief off-track excursion when he tangled with some Tuff Blox, but he wasn’t injured. Both Stewart and Stroupe opted to sit the second session out, we’ll have more on that when we find out more. Ryan Dungey was fastest with a 56.401, then Justin Brayton was second with a 56.777. Villopoto (56.825) Canard (57.043), Chizz (57.316) and Reed (57.325) rounded out the top five, followed by Millsaps, Short, Windham, Wey, and Tedesco.

Making it through the rhythm sections mistake-free is going to be key. They are both very long, and even a small mistake will lead to a loss of momentum for the remainder of the section. The whoops are also very deep, and like Oakland, will be a separating factor tonight.

That’s it from practice here in Anaheim. As usual, keep your computers locked here on Racer X Online and follow us on Twitter (@racerxonline) for live updates, all night long. 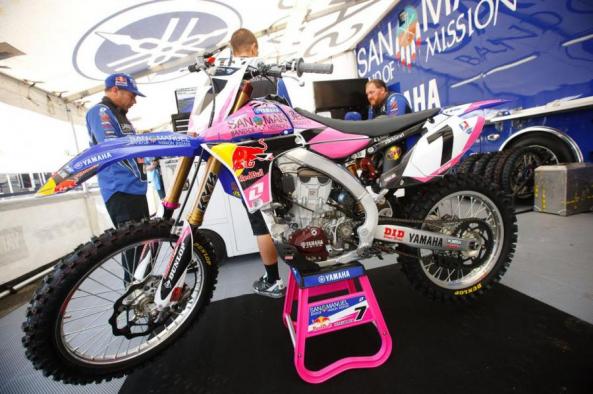 Here's James Stewart's bike from earlier in the day. He was fastest in first practice and then sat out the second practice session, we're trying to find out why.
Cudby photo
Read Now
March 2021 Issue Now Available