After a successful amateur-racing career that saw her win 13 amateur national titles and more than 100 races, Fiolek made her full-season professional racing debut in 2008, winning the AMA/WMA Womenʼs Motocross Championship in her first attempt and garnering unprecedented mainstream and enthusiast media coverage.

She followed up that success with much more: joining the American Honda Racing Team in 2009, she secured the WMA Championship for the second year in a row and also earned a gold medal in the highly popular X Games competition. After finishing 2010 as runner-up in the WMA series and collecting X Games gold once again, this year she will vie for another WMA title and compete in the 2011 X-Games competition plus other select events. In addition, Fiolek recently penned “Kicking Up Dirt,” a book docu- menting her efforts to overcome her deafness and become a champion in the demanding sport of Motocross. 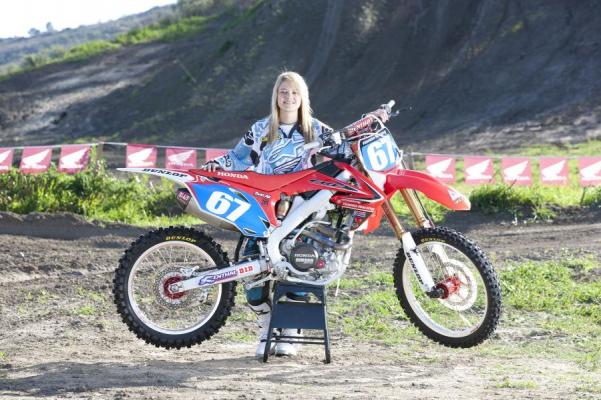 American Honda Racing Team Manager Erik Kehoe said, “Ashleyʼs commitment to racing and her strength have earned her not only the respect of Honda but the entire industry. Her achievements have really helped elevate womenʼs racing to a wider audience.”

“Being able to race Motocross professionally on the factory team at Honda has been a dream come true for me,” said Fiolek. “I canʼt thank American Honda enough for providing me this continuing opportunity and I look forward to working with Erik and the whole American Honda Racing team once again.”

“Being able to race Motocross professionally on the factory team at Honda has been a dream come true for me.”