AURORA, Ill. –  Monster Energy AMA Supercross, an FIM World Championship, heads to Anaheim’s Angel Stadium this Saturday for its second annual PINK themed race in support of finding a cure for breast cancer. The PINK supercross race will help fund the Susan G. Komen 3-Day for the Cure 60-mile walk. With the season four races in, San Manuel Yamaha’s James Stewart has assumed control of the points lead in the Supercross class with a win last weekend, while Pro Circuit/Monster Energy/Kawasaki’s Broc Tickle earned his first win in the Western Regional Supercross Lites class, which puts him one point behind the division leader.

Media day will be held Thursday, February 3 from Noon to 2:00 p.m. inside the Diamond Club at Angel Stadium, featuring team Rockstar Energy Suzuki and Troy Lee Designs Honda. Riders will be available for interviews and will ride the track for the media.

Last weekend before 44,394 fans at a rainy Oakland Coliseum, Monster Energy Kawasaki’s Ryan Villopoto opened the main event by capturing the holeshot. Leading through two laps, Villopoto went down and lost his position to Stewart. Unfazed by a series of hard crashes earlier in the day, Stewart controlled this lead for the remaining 18 laps, registering his second victory of the season. This victory also moved Stewart into first place in the standings with a two point lead over Villopoto. 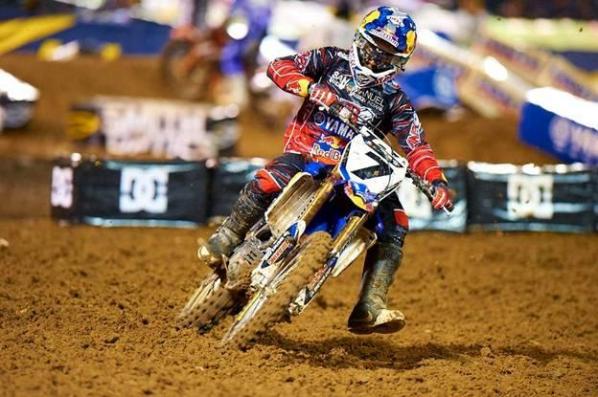 “This is a great win for me and the team,” said Stewart. “It’s a long season and it’s all about winning a championship. The rain tonight made it a little difficult, but I am glad I came out on top.” 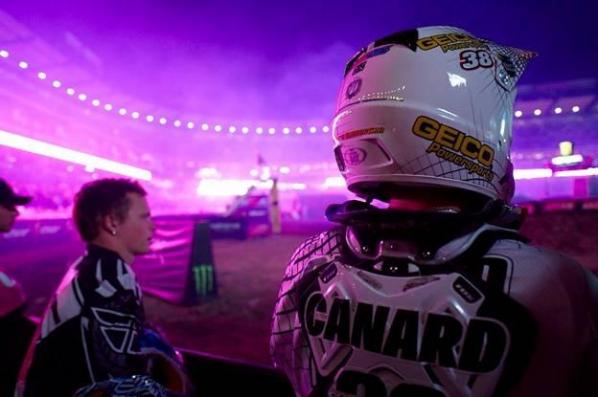 This Saturday marks the second year in a row that the final Monster Energy Supercross race in Anaheim will be PINK themed in support of the fight against breast cancer.
Photo Credit: Feld Motor Sports

In the Supercross Lites class, Geico Honda’s Eli Tomac., kicked off the main event by winning the holeshot. Leading through three laps, Tomac lost control of his bike and handed the lead to Red Bull KTM’s Ken Roczen. On lap four, Hansen came up from the rear and traded the lead with Roczen several times. Near the end of lap five, Hansen won the battle between Roczen and regained full control of the lead.

“The track was pretty difficult,” said Roczen. “I still need to learn how to ride my own race. The first couple of laps were tight out there. Fourth place is okay, but I actually wanted to get on the podium this race.”

Hansen maintained this lead for three laps, but on lap eight, Pro Circuit/Monster Energy/Kawasaki teammate Tickle charged his way to the front, eventually making a solid pass on Hansen. Tickle went on to lead the remaining laps and lock in his first victory of the season. Heading into Anaheim, the race for the points lead in the Supercross Lites class is now separated by one point with Hansen still in front. 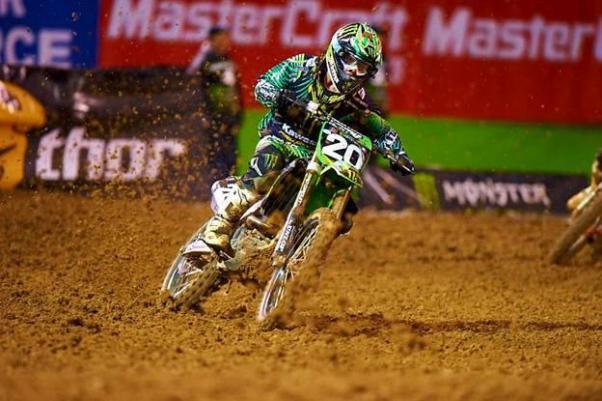 “Man, I overrode the track tonight,” exclaimed Hansen. “When I made the mistake of tripling two in a row, I tightened up and my teammate [Tickle] passed me fair and square. I need to pick it up for this coming weekend in Anaheim and really be smart out there.”

“I was so focused out there tonight,” said Tickle. “I knew it was going to be really slick out there, so I tried to ride smooth and take it lap by lap.”
Last year during the final Anaheim race, Monster Energy/Kawasaki’s Ryan Villopoto, of Poulsbo, Wash., won the evening’s race, at Angel Stadium in front of a nearly sold out crowd. GEICO Powersports Honda’s Trey Canard, of Shawnee, Okla., won his second Western Regional Supercross Lites class main event of the season.

The first race was held in Anaheim on December 4, 1976, and Marty Smith won on a Honda. Ricky Carmichael and Jeremy McGrath share the all-time Supercross class win record at Angel Stadium with eight wins each. In the Western Regional Supercross Lites class, three riders have swept all three races at Angel Stadium: Villopoto, Ivan Tedesco and Ernesto Fonseca. Stewart, Windham and McGrath are the only riders in history to win in the Supercross Lites class and Supercross class at Anaheim.