By Andy McGechan
The corks popped and the champagne flowed like never before at this year’s 50th annual Woodville Motocross ... and that was regardless of the actual racing at this iconic race in the centre of New Zealand’s North Island.

A three-day festival of motorcycling was staged to mark the half century that has passed since New Zealand’s largest stand-alone motocross was created by Palmerston North man Tim Gibbes back in 1961.

The host Manawatu-Orion Motorcycle Club, celebrating its own 100th anniversary this year, put on a spectacular series of shows over the weekend, from mini races on Friday and a freestyle motocross display – including X Games winner Levi Sherwood -- in The Square in Palmerston North on Saturday evening, right through to Sunday’s main event, the Honda-sponsored senior Woodville GP.

A former winner of the main prize himself – in 1962 – Gibbes and many of his old rivals from the 1960s were on hand to cheer as Motueka’s Josh Coppins became the historic 50th winner of the Woodville trophy on Sunday afternoon.

Although the results show that Coppins (Yamaha) won both MX1 (open class) races and the main race, the 10-lap Invitation International race, he did not have it all his own way with Mount Maunganui’s Cody Cooper (Suzuki), Rotorua’s Michael Phillips (Honda) and Christchurch’s Justin McDonald (Honda) threatening at all times. 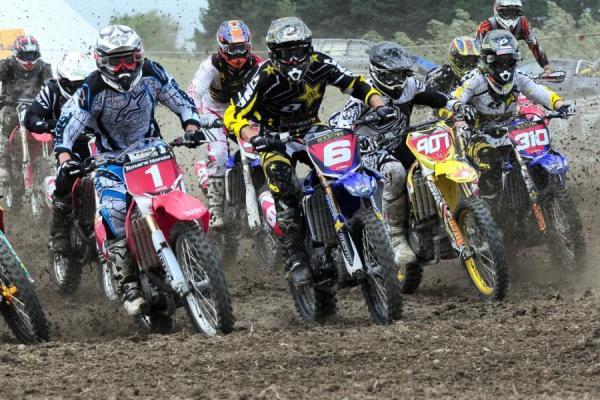 Phillips actually led the prestigious main race right until two corners from the end, when he then shockingly dropped his bike in a deep rut and gifted victory to Coppins.

It was a stunning finish to the race, but the sensations didn’t finish there for Coppins.

Back in the pits immediately afterwards, Coppins took a cell phone call from his partner Lisa, not so much to inquire about how the racing was going, but for her to report that she had just given birth, only 50 minutes earlier, to their second daughter, Elsie.

Meanwhile, in other racing, Hamilton 42-year-old Darryll King (Yamaha) served notice on the sport’s rising stars that he’s still the reigning royal in the MX2 (250cc) class, winning the day with 3-1 results, enough to edge out Taupo’s Cameron Dillon (Honda) and Mangakino’s Kayne Lamont (Suzuki) for the overall win.

It was a monster weekend for Picard, who was the big winner during Saturday’s junior race programme, the Suzuki star winning both the 14-16 years’ 250cc four-stroke class title and the 15-16 years’ 125cc title, as well as going on to win the Champion-of-Champions crown for 125-250cc riders.
Read Now
March 2021 Issue Now Available