Three winners in as many events, this season’s New Zealand supercross nationals could not be much tighter or impossible to predict at the top of the senior open class.

Christchurch rider Justin McDonald (Honda) won the day at the third round of four in this season’s Backflips-sponsored New Zealand Supercross Championships near Motueka on Sunday afternoon, making it the third rider in as many rounds to dominate racing in the premier grade.

Motueka’s Josh Coppins (Yamaha) won the opener in Tokoroa on December 11, while Mount Maunganui’s Cody Cooper (Suzuki) won round two in Taupo a week ago.

But it was again the turn of a South Islander to stand on top of the podium as McDonald scorched to 2-1-1 results in his three races at Motueka’s popular Rat Track circuit.

That result propelled the 25-year-old McDonald back into second spot in the championship standings, now just 10 points behind series leader Coppins. Cooper, meanwhile, slipped from second to third overall and it will go down to the wire, at the fourth and final round near Timaru next weekend to decide where the coveted open class title ends up.

Coppins finished 1-3-3 on Sunday, while Cooper was only fourth best, claiming 4-5-4 results in his three outings. Third best in the open class at Motueka was Rotorua’s Michael Phillips (Honda), who finished 3-2-2.

As happened at Taupo’s round, the Senior Lites (250cc) class at Motueka was headed by Christchurch Honda rider Craig Smith, the 17-year-old again winning the day and extending his class lead to a solid 31 points over the new No.2 man, Peter Broxholme (Honda), of Tauranga. 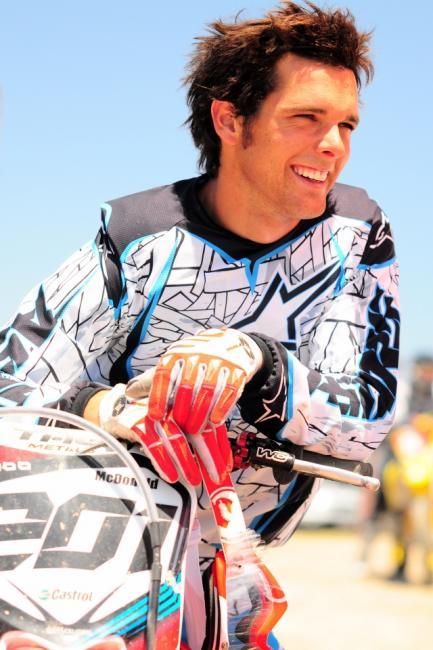 Justin McDonald (Honda), overall winner of the open class at round three of the supercross nationals near Motueka on Sunday.
Photo by Andy McGechan, BikesportNZ.com

McGoldrick finished 4-3-4 to take runner-up honours while it was actually Richardson who dominated the early phase of the event, winning the first two Lites races of the day, before crashing to the sideline in the final race, forcing the Australian to settle for third overall for the day.

Meanwhile, Atiamuri’s Dion Picard (Suzuki) continues to lead the Junior Lites (250cc) class, his 2-3-1 results at Motueka giving his second overall for the day, behind round winner Micah McGoldrick (KTM).

Rangiora’s Micah McGoldrick closed in on Picard’s lead but he is still a solid 14 points behind and will need an outstanding day in Timaru is he is to clinch the crown. Micah McGoldrick won the national 85cc title last season.