Irvine, Calif. – Monster Energy Kawasaki’s Ryan Villopoto capped off a perfect night for Kawasaki with a win during the opening round of the Monster Energy AMA Supercross, an FIM Championship, while the Monster Energy/Pro Circuit/Kawasaki team swept the Lites podium. Josh Hansen earned his fifth-career AMA Supercross Lites win, while Broc Tickle showed he could run up front as he led eight laps before Hansen got by. In his first-ever supercross race, Tyla Rattray overcame a crash earlier in practice to round out the podium. The domination showed as Kawasaki led every lap of both main events. 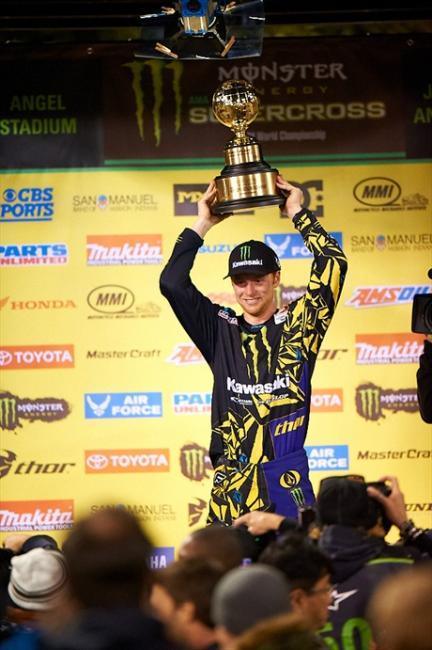 Shake Off The Cobwebs
After not racing for nearly nine months, Villopoto entered the night prepared to shake off the cobwebs and get down to business. The road to recovery may have been long, but taking home the win was a good way to leave Round 1.

“One of the big goals for the weekend was to leave Anaheim 1 healthy,” said Villopoto. “I felt really good in the main and didn’t get tired. It’s a good way to start the season. I know it’s a long year, but if I could put together more wins, that would put myself in good position for a championship.”
Another Win For Hansen
With his victory, Hansen picked up where he left off last season in the AMA Supercross Lites class. Last season he won the 2010 AMA Supercross Lites Western Region finale in Salt Lake City, Utah and now another win comes at the beginning of the 2011 season. The Anaheim 1 victory puts him in good position to move toward the ultimate goal of a championship.

“It’s really great to start the season off on top," said Hansen.
Feeling At Home
Tickle has already propelled himself from being a single-race winner in 2010 to a title contender in 2011. His night saw him earn both the heat and main event holeshots, win the heat race, and hold onto the lead for eight laps of the main before finishing second on the night.

“I have never felt so confident before in my career,” said Tickle. “The team supports me in every way and I definitely feel like I’m a part of the family. It has really given me the confidence to know I can go out there and win every weekend. Now I just have to get around my teammates and hopefully I can be there in the end for the championship.”
Podium Finish in SX Debut
In his first-ever supercross race, Rattray showed his determination as he overcame a practice crash to finish third in the AMA Supercross Lites main event.
Every Lap Led
The Kawasaki KX™250F and KX™450F had a successful night, leading every lap of both main events. Between Hansen and Tickle, the KX250F led every lap in the Lites class and between Ivan Tedesco and Villopoto, the KX450F led every lap of the Supercross class main event.
First Race Jitters
It was hard to tell that Villopoto had been absent from racing since April with his performance on Saturday night. In the heat race, he raced into the lead by the second turn and got his first experience in a long time racing talented competitors.

"You can practice all day long, but racing is pretty different," said Villopoto. "It felt good to get the first heat race out of the way. I think I was more comfortable after that race. It’s always good to get a win and it helps to see how I stack up after being out so long."
The Debut Must Wait
Monster Energy Kawasaki’s Jake Weimer made an appearance at the first round of supercross to support his teammate Villopoto, sign autographs and meet with fans, while he nurses his arm back to health. His anticipated debut must wait, but he was eager to cheer on his good friend Villopoto.
Round 2 of 17
The supercross season is off and running with the next event moving the circuit to Chase Field in Phoenix, Ariz. With one round under every ones belt, Kawasaki looks to continue their success from Anaheim.
AMA Supercross Class Results
1. RYAN VILLOPOTO, POUSLBO, WASH., MONSTER ENERGY KAWASAKI
2. Ryan Dungey, Belle Plaine, Minn., Suzuki
3. James Stewart, Haines City, Fla., Yamaha
4. Trey Canard, Shawnee, Okla., Honda
5. Chad Reed, Tampa, Fla., Honda
6. Kevin Windham, Centreville, Miss., Honda
7. IVAN TEDESCO, MURRIETA, CALIF., KAWASAKI
8. Brett Metcalfe, Lake Elsinore, Calif., Suzuki
9. Josh Grant, Riverside, Calif., Honda
10. Andrew Short, Smithville, Texas, KTM