Racer X Online has obtained the official pre-entry list for the opening round of the 2011 Monster Energy AMA Supercross, an FIM World Championship. The series opens next Saturday night, January 8, 2011, at Angels Stadium  in Anaheim, CA. All of the top AMA Supercross riders are on the list, including Jake Weimer, the Monster Energy Kawasaki factory rider who unfortunately broke his arm while practicing yesterday.  And missing is Christophe Pourcel, the still-unsigned superstar who was set to move up to the AMA Supercross class.

The most questions surround who will be riding what coast in Lites Supercross, which is an annual guessing game for Supercross fans. Unfortunately, it's still a guessing game, as powerhouse teams like Monster Energy/Pro Circuit Kawasaki and GEICO Powersports Honda pre-entered all of their riders for the opener, and have until tech inspection the morning of the race to decide which riders will actually compete in Anaheim. But you will find Ken Roczen, the Red Bull KTM rider from Germany who will be making his AMA debut.

Here are the pre-entries in this PDF link: 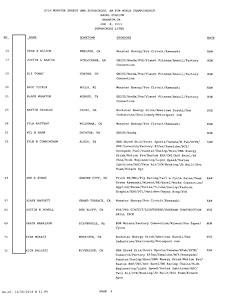