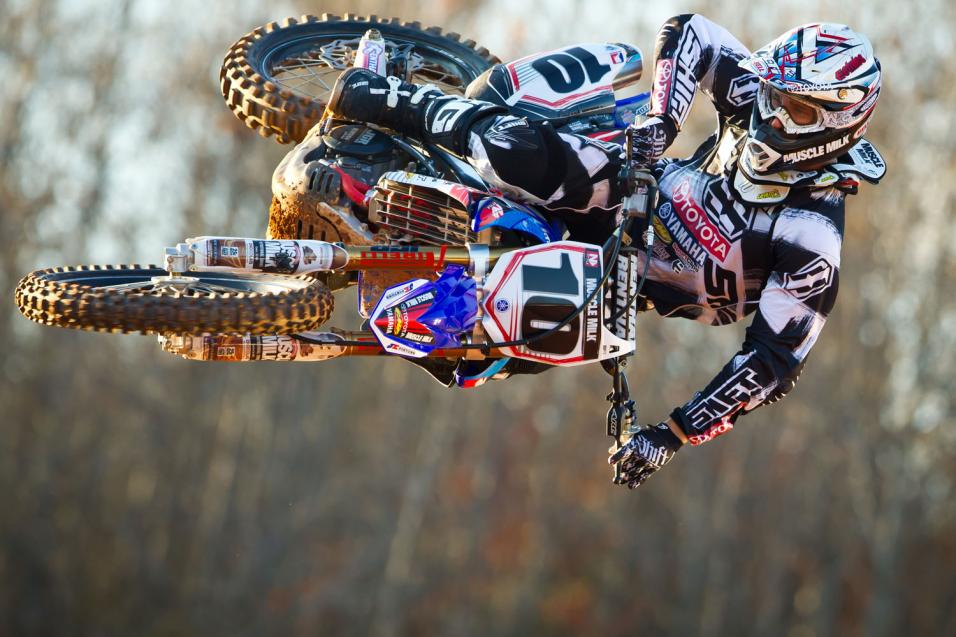 Advertisement | Advertise with Us
Anaheim, CA Anaheim 1 (A1) Monster Energy AMA Supercross Championship
Finally, it's time for the 2011 Monster Energy AMA Supercross Championship to get started. This Saturday marks the beginning of a brand new season of racing for the world's fastest riders, and you can watch it in person at Angels Stadium in Anaheim, California, or you can tune it to SPEED TV's live coverage of the entire program. The show begins at 10 p.m. ET, 7 p.m. locally. Here are ten things to watch for at Anaheim.

1.) How heavy is that #1 plate? Rockstar/Makita Suzuki's Ryan Dungey will unveil one of the #1 plates he earned last year by being strong, fast and consistent throughout all 17 rounds of this grueling series. He finished every race, while the primary favorites fell by the wayside with injuries. Now he's the one with the big target on his back (and not the one that comes with his personal sponsorship deal with Target stores). Dungey is no longer a prospect -- he's the champion -- and so the expectations have changed. He's also racing for the first time without Roger DeCoster in his corner, and he's going to find out what champions like DeCoster, Ricky Carmichael, Jeff Stanton and more have learned: It's can be a lot harder to defend a title than it is to win it in the first place!

2.) Vengeance = Motivation. Whether you're James Stewart or Chad Reed, Ryan Villopoto or Kevin Windham, you are likely going into this series thinking that the #1 plate that Dungey wears should have gone to you. Both Stewart and Reed have worn the AMA Supercross crown before, but neither of these fierce rivals made it past the third round last year. In Villopoto's case, he suffered a late start but then seemed to have a hook in Dungey before going down and getting knocked out in St. Louis. As for Windham, with a better start, he might have had a real shot at the #1 plate that has eluded him throughout his AMA Supercross career. Now they are all back at the starting gate next to Dungey, and it's all even, though four of them can use vengeance as part of their motivation.

3.) Bold New Graphics! While most of the top riders stayed with their previous teams, there were a few big changes during the seemingly endless "silly season." Chad Reed is now riding a Honda CRF450 under his own TwoTwo Motorsports tent, while Josh Grant has joined the Honda factory team. Trey Canard, a former Lites champion, has moved up to the AMA Supercross class and will ride alongside Grant. And after a strong summer on the 450 during the Lucas Oil AMA Motocross Championship, Brett Metcalfe was picked up by Rockstar/Makita Suzuki to ride the fuel-injected RM-Z450. Andrew Short has switched from red to orange, riding for Red Bull KTM on their 350 SX-F, and Kyle Regal has teamed up with James Stewart on the San Manuel Yamaha squad. The veteran Ivan Tedesco is now the leader of Dodge/Hart & Huntington Kawasaki, where he will be joined by former San Manuel Yamaha rider Josh Hill....

4.) One Man Team. Ryan Villopoto was supposed to be joined by Jake Weimer on the Monster Energy Kawasaki team for the AMA Supercross class, but then Weimer, last year's West Region Lites champ, was injured while testing and will be out for several weeks. There was plenty of talk about possible replacements ranging from Reed to Christophe Pourcel, from Josh Hansen to Scottish rider Billy Mackenzie. But it now appears that RV will go it alone under the big green tent, at least for the first round, Then he will be joined by Australian Jake Moss, who will fill in for Weimer while he's on the mend. 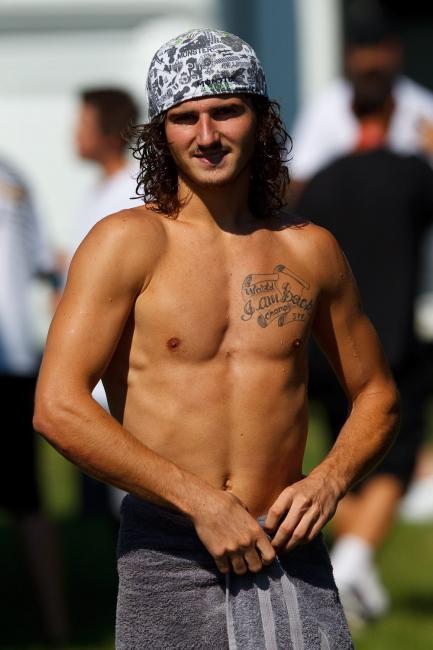 One of the sports biggest stars, Christophe Pourcel, will be sittinng out 2011 supercross.
Photo: Simon Cudby

5.) The Missing Frenchmen. Fans expecting to see the two fastest French riders today will be disappointed, as Pourcel, the two-time East Region Lites SX champ, has decided to sit out the '11 AMA Supercross tour after not finding a suitable ride for the series (the economy had more to do with that than his tremendous talent). He is now working on a deal for outdoors, while also rehabbing the shoulder he had surgery on. Two-time world motocross champ Marvin Musquin was set to be making his AMA debut at Anaheim for the Red Bull KTM team, but he tore up his knee back in November and will likely not race again until the start of the AMA Motocross tour.

6.) Ze German. The French may be missing, but here comes Ken Roczen! The furiously fast 16-year-old is the fastest rider to come out of Germany since Pit Beirer was doing a number on Team USA at the '95 Motocross des Nations. Beirer is now a higher-up at KTM, and the German prodigy Roczen is the prize jewel for the company. He may be a question mark in SX going into Anaheim, but the rest of the world knows just how good he is in motocross -- he was the top-finishing 250F rider in both motos at the Red Bull Motocross of Nations last September in Colorado. The kid has a progressive riding style like James Stewart, charisma like Ryan Dungey, and the drive of Ricky Carmichael.... #194 is going to be fun to watch!

7.) Young Americans. Yet Roczen really isn't the favorite this weekend in what will be a ridiculously talented AMA Supercross Lites class. There's Broc Tickle, who will be making his Monster Energy/Pro Circuit Kawasaki debut alongside veteran teammate Josh Hansen (who just might be the favorite based on his Australian Supercross Championship credentials), as well as GEICO Powersports Honda riders Eli Tomac and Wil Hahn. Lucas Oil/Troy Lee Designs Honda will feature Christian Craig, the son of past SX winner Michael Craig, and DNA Shred Stix/Star Racing Yamaha’s Kyle Cunningham and Nick Paluzzi. And never count out Ryan Morais.... There's more, but the lineups are still not certain, as many Lites teams sign their guys up on both coasts and then wait until the last moment to decide. 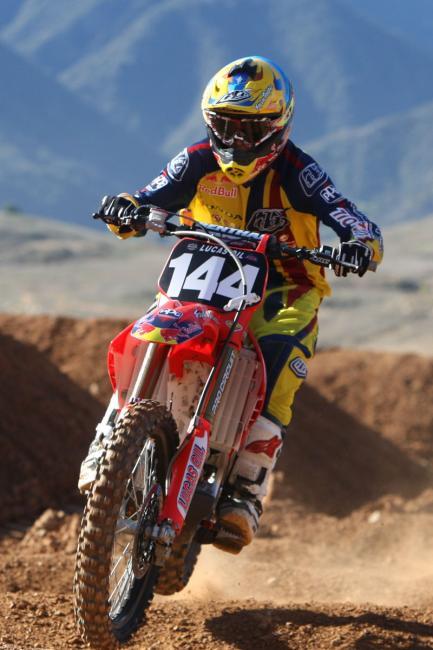 8.) More World Power. Roczen isn't the only foreign import to watch in the Lites class at Anaheim. Coming back for a few rounds will be British rider Tommy Searle, who will actually race a Kawasaki on the Grand Prix circuit this year, with an eye towards getting another full-time shot in America in 2012. Former world champ Tyla Rattray of South Africa is as fast as anyone outdoors, but injuries have curbed his supercross experience and he is a big question mark. Gareth Swanepoel (who also hails from South Africa) will be running number 387 aboard a DNA Shred Stix/Star YZ250F, and then there's Ecuador’s Martin Davalos, who should be in the mix up front as he makes his debut for the Rockstar Energy Suzuki team. Other foreign riders to keep an eye on include Brazil’s Antonio Balbi (#903), Canada’s Kyle Beaton (#132), Japan’s Yuta Ikegaya (#793).

9.) Breakthrough Rides. Anaheim means a new lease on racing for everyone, and there are definitely a few guys who could use that right now. Muscle Milk/JGR Yamaha's Davi Millsaps will be riding a Yamaha for the first time in his career after several up-and-down years at Team Honda. He will join the always-steady-but-never-leading Justin Brayton, who is long overdue for a breakthrough ride. Kyle Chisholm and Tommy Hahn give MotoConcepts Yamaha a formidable presence, and they might just be a good start away from doing something special at Anaheim. And then there are prodigiously talented riders like Mike Alessi and Jason Lawrence who are such big question marks that it's hard to tell how they might do or, in the latter case, if they’ll even show up. 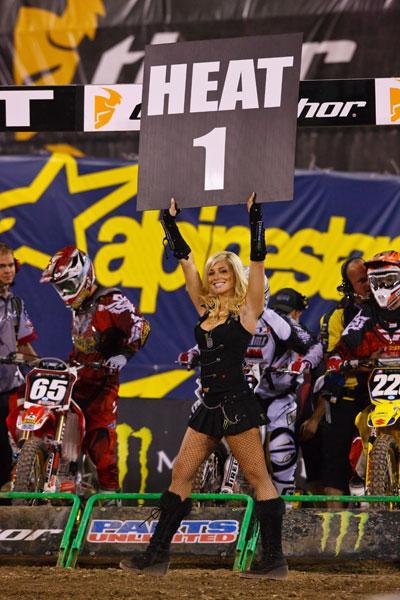 10.) The New Queen! The last change of the off-season was a shocker: Mercedes Terrell had to give up her crown as Miss Supercross at the last moment, and she handed it over to fellow Monster Energy Girl Dianna Dahlgren. Why is this important? Chances are you will be seeing a lot of the new Miss Supercross, whether you're sitting in the stadium or watching at home on TV. Besides, she will be the one that hands the winners their trophies on the podium this Saturday night. Can't wait to see who the lucky guys are!