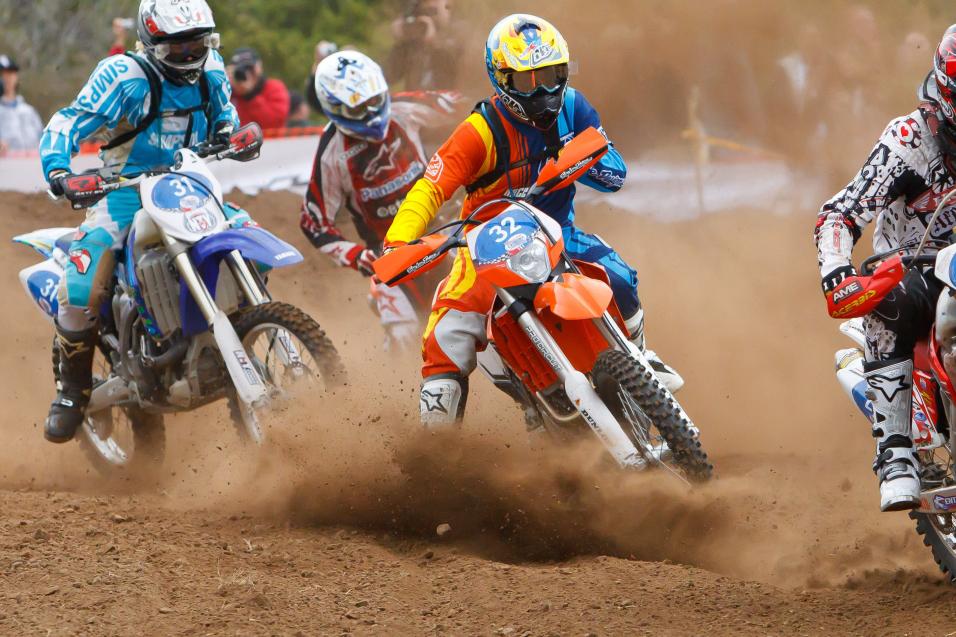 While checking out Racer X online I got a "subscribe now" box with Josh Grant sporting a Metal Mullisha t-shirt and hoody. I personally don't go for all that wanna-be, badass, attitude gear but that's just me. But what's with the corny gang sign Grant's throwing down?  Looks like he's teaching a new method of tossing off to me. Any Idea of what this gangster hand sign represents?  Kind of a quick change for a guy coming from such a religious-based team like Gibbs. Good thing Deegan has money… He can post bail for Grant in the future. Just watch.

I’ve seen the ad you are referring to and wondered myself what that was about. Josh grew up on the not-so-mean-streets of Riverside, CA so his street cred as a gangster takes a bit of a nose-dive. I really have no idea what the hand sign means but I thought the attached photo was interesting.

Say a factory rider gets hurt, and someone else gets the call to ride the bike for a given number or races. Does the factory rider still get paid his base salary, and is this "loss" to the factory covered by an insurance policy or is it just a risk the factories have to take?  And how do budgets work for this possibility?  Do teams have to keep money set aside for potential replacement riders, or is the factory lure always enough?  Also, is this process any different for non-factory teams?

Man, you really put the "Ask" in Ask Ping. I haven’t been hit with that many consecutive questions since my wife came home and caught me wearing her high heels and just a touch of eye shadow. Here’s your answers:

Yes, riders will continue to get their salary after an injury, though sometimes it will get reduced after a certain number of months. That depends on how good the riders agent was. This is not covered under a policy; it is the factory’s responsibility. They plan the rider’s salary into the budget for that season. If a replacement rider is used he is only offered the ride and potentially a bonus plan. The salary that was put in the budget is still being paid to the injured rider. Low budget teams would operate under the same basic guidelines, however, some variations occur based on the level of the replacement rider and the needs of the team. Hope this helped. No more questions.

I notice that most of the questions you answer begin with some praise to you. I would waste a paragraph talking about it but I feel you already know how awesome your life is. Anyway, why is it that Minneapolis has been booted from the Supercross schedule for the past several years? I know the Metrodome (actually called "Mall of America Field" now) is not the best venue and it is usually pretty cold outside that time of year, but that doesn't mean we can't partially fill up the stadium. Is there a reason why we got taken off of the schedule?

Let’s review the facts as you have stated them:

1) The stadium is not the best venue.

2) Pretty cold outside that time of year.

I would normally just revert you back to points one through three but there is something bigger at work here. I’m not sure if you follow your local news or current events nationally but there was a bit of malfunction there at Mall of America Field. I wonder what would happen if a few tons of snow landed on your head as you launched off a triple? Watch the video and you decide.