AURORA, Ill. – Midway through the 2010 Monster Energy AMA Supercross, and FIM World Championship, season, Factory Honda rookie Trey Canard received the opportunity of a lifetime when he was asked to fill in for an injured Andrew Short while on hiatus from the AMA Supercross Lites Western Regional Championship. The Oklahoma native made his debut in the premier AMA Supercross class in Indianapolis and after six races, posted five podium finishes to prove he has the ability to succeed in the elite division.

As a result of his stellar substitute performances, Canard’s service at Factory Honda also served as a tryout for the team heading into the 2011 Monster Energy Supercross season when the 2008 AMA Supercross Lites East Region Champion was slated to make his move into the premier class. He further proved his maturity and composure as a rider by staging an incredible come-from-behind performance to claim his first national title in AMA Motocross this past summer.

"The Lites class is an entirely different ball game when it comes to racing," said Canard. "But having such strong performances in the premier class helped give me a little more confidence (outdoors). The motocross championship has been huge (for me), but ultimately I’m the same guy. A lot of positives came out of that title."

When the offseason began, Canard knew almost immediately where he was headed, giving him a slight advantage over his many counterparts who were still solidifying their deals for the 2011 season. 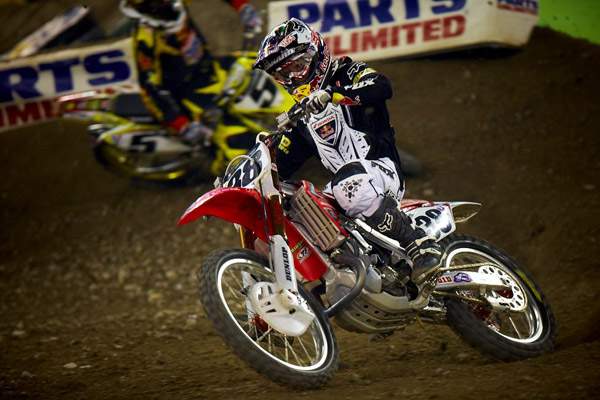 "I was very thankful," he added. "I know a lot of guys stress about where they’re going to end up, but American Honda is an amazing team."

With a breakthrough season under his belt, Canard arguably has the most momentum heading into his rookie campaign other than reigning premier class champion Ryan Dungey. Despite coming up short in his bid for the 2010 AMA Supercross Lites Western Regional Championship, the level in which he rode in the premier class turned heads and effectively put Canard in the conversation for title contenders in 2011.

"I really just want to be prepared," said Canard. "I want to come in ready, learn, and do the very best I can do. That’s all I can ask (of myself)."

While longtime Factory Honda riders Andrew Short and Davi Millsaps have both moved on, Canard will welcome 2009 Anaheim 1 race winner Josh Grant as his teammate. Grant, who rode Hondas throughout the early portion of his career, has considerable speed and talent and will be a good motivator for Canard under the Honda tent.

"I really like Josh," explained Canard. "I think he’s a great guy with a huge amount of talent. I think we should (be able) to elevate each other’s riding this whole year."

Perhaps the best thing for Canard heading into 2011 is his continued relationship with Honda. The red riders have supported the fourth-year rider throughout his young career, giving him the opportunity that led to his ride for 2011. Having already established a working relationship with the Factory Honda crew in addition to bringing his mechanic Brent Presnell along with him, Canard looks to have all the tools necessary to make a title run and follow in the footsteps of the current champion and longtime rival Dungey.

"To have a team and a company like Honda behind me has been huge," said Canard. "The fact that I’m used to the bike and don’t have to go through a whole learning curve is awesome."