The Lucas Oil AMA Pro Motocross Championship features the biggest names, the closest racing and the most thrilling MX action.

Now fans can enjoy every vital, mud-spitting, high-jumping moment from the entire 2010 season in the action-packed, two-disc Official Review, new from Duke.
Featuring more than seven hours of the best footage, this is the full story of both the 450cc and 250cc championship battles, with action from every race at all 12 rounds – that’s almost 50 of the most dramatic motocross showdowns!
All the essential highlights are here, captured in the most breathtaking footage to ensure you enjoy all the edge-of-the- seat drama as this amazing season unfolds. This is gate-to- flag action all the way!

In 2010, Ryan Dungey stunned the world with a staggering rookie season in the 450cc championship – taking an amazing 10 outright wins and claiming the title with two rounds to spare.

It was an awesome display, and a dramatic one to watch as he kept reigning champ Chad Reed and challengers like Mike Alessi at bay.

The thrilling chase for the 250cc title was nail-biting, right down to the final round. With just one moto to go, Trey Canard trailed Christophe Pourcel by just seven points, and the decision would all come down to championship-deciding injury.

The Official Review brings you the comprehensive story of both championship challenges, as well as stand-out performances from stars like Tyla Rattray and Scotland’s Dean Wilson. 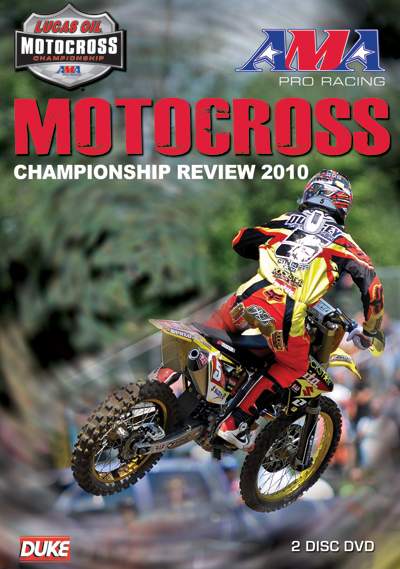