Geico Honda’s Justin Barcia made his first statement of intent towards the 2011 Monster Energy AMA Supercross East Region Lites series by proving he is fit, fast and ready for more hard-ball antics as he won the Supercross Paris-Bercy in his maiden appearance.
The 18-year-old GEICO Powersports Honda rider bounced back from a dramatic outing on Saturday in which he used the kind of close-proximity passing tactics normally reserved for NASCAR to comfortably claim the third and final evening on Sunday. In becoming one of the youngster winners ever of Europe’s biggest supercross meeting, Barcia narrowly defeated the consistent Kyle Chisholm and extended the victorious streak of AMA-based riders to four in a row, and 10 from the last 11 years.

Barcia went 1-5-1 over three sell-out evenings performed in front of over 40,000 weekend fans, with the French in typically enthusiastic and passionate voice. The CRF250R rider got caught up with Cyrille Coulon and Fabien Izoird in the ‘L’Americaine’ elimination heat – perhaps as a form of recompense for Saturday – but made the holeshot and led a shadowing Chisholm through the fifteen laps of the Main. He fitted the crown thanks to just a point advantage over the Motoconcepts Yamaha man. 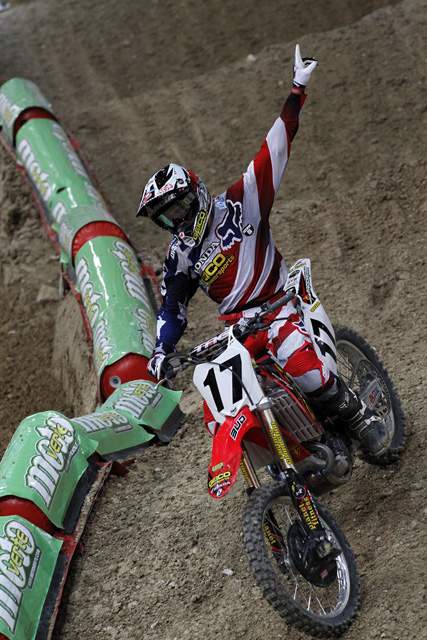 "I knew that the start here in Bercy is very important and I was focused for that," said the New York-born Barcia. "I’m proud to be the new King of Bercy, I know who has won this event in the past and it’s great to be there. The atmosphere was incredible and I enjoyed this European trip."

Saturday night victor Greg Aranda started badly and the Frenchman was never in the running for a second tilt at the chequered flag while countryman Cedric Soubeyras gained arguably the best result of his career to-date by putting the 250-SX two stroke KTM on the final podium in third place.

It has been a chaotic and cruel Bercy this year with those limping out of the French capital including Michael Byrne (suspected broken wrist), Max Anstie (broken right kneecap), Grant Langston (briefly dislocated pelvis) and Marvin Musquin (injured right knee, the seriousness of which is pending further scans).

More seriously, freestyle Charles Pages remains in a coma after an accident during the final session on Saturday.