GEICO Powersports Honda’s Justin Barcia created a memorable Bercy debut on Friday night at a packed Palais Omnisports stadium and his performance epitomised the hype and fuss surrounded the eighteen year old. A vibrant outing in the Main Event saw the East Coast runner-up earn his spurs with a comprehensive victory over MX2 World Champion Marvin Musquin and another Bercy debutant, Kyle Chisholm, in third.

Earlier in the evening Barcia showed another well-publicised facet of his increasing profile by leaving marks on Yamaha Monster Energy’s Gautier Paulin and also managing to block pass the majority of the pack in the Eliminator Heat, unique to Bercy. The risky moves were part of the Barcia-edge but Paulin – winner of the Eliminator but a first lap crash victim in the Main – felt he needed to complain to his rival after having also been rubbed by the American in Italy two weeks ago. 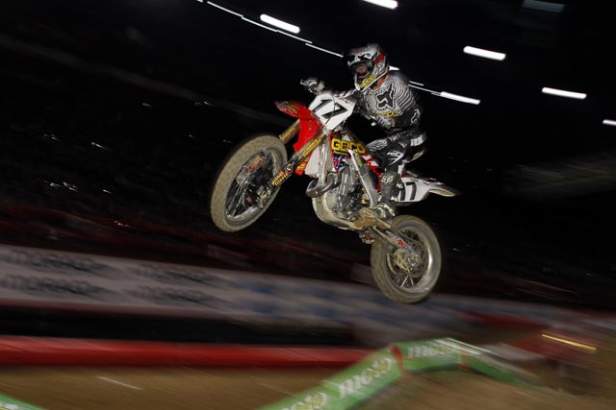 Paulin and Barcia were the stand-out riders of the competition and with the former’s accident the boisterous French public were denied a tasty duel for the crucial race. Musquin, in second, had been getting quicker all night and was troubled by Chisholm who endured a terrible Superpole and Eliminator but was one of the few survivors of a stricken Main in which only nine riders made the flag. Max Anstie (injured right arm), Ken De Dycker, Grant Langston and Greg Aranda all hit the deck with varying degrees of severity and Langston in particular closed the first part of his final meeting as a Pro with a tyre strip on his back thanks to Aranda’s rash decision to triple. Blake Wharton and Michael Byrne did not even make the gate after earlier incidents. MX1 World Champion Tony Cairoli was out of sorts on the 350SX-F after suffering a fall during the week, ‘it was a scary crash; I’m lucky to be here’ he said.

Musquin, sporting the number one plate and an improved fuel-injected 250SX-F that he has spent time honing on the tracks of Corona before heading back to his native shores, took the plaudits on the podium but the crowd were also noisily appreciative of Barcia’s guile and adaptability.

"I’m really happy and we made a few changes to the suspension to cope with the track that was getting worn by the end of the night," the victor said. "I was losing time in the whoops to Paulin but I took some advice from Eric Sorby and David Vuillemin and I guess the lesson there is to definitely listen to your elders!"

Aside from the action the sight of the French Legends; Mickael Pichon, Vuillemin, Jacky Vimond, Sebastien Tortelli, Fred Bolley and others and of course Jean-Michel Bayle was also a highlight of the lengthy and delayed program. Part two of three – with hopefully a field that is not too depleted – will kick off tomorrow evening. 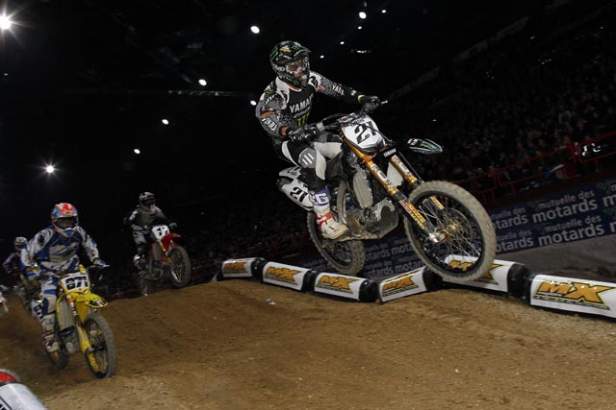