Hello, everyone, and welcome to the Rev Up. Fall was nice to us here in the Carolinas and lasted for a good spell, but the first winter wind hit us the other night and knocked most of the color from the trees in one fell swoop. Old man winter has reared his cold, gray face and now we have to improvise to keep the stoke going. Well, that’s unless you live in California or Florida, in which case you’re now enjoying the best days of the year. But, most of the country will be pulling on the flannel and work boots until April gets here. That said, if you ask me, that isn’t so bad. I like some of the subtleties that coincide with winter time. Chopping wood is pretty much ideal motocross exercise, and if you ask me, there isn’t much better than building a fire at night and enjoying the fruits of your effort.

I’ve grown to enjoy this time of year, save for that music that is filling every gas station, grocery store and radio station...but I digress.

Once again, Racer X Films has captivated me in a big way. Speaking of old man winter, how about old man Jeff Ward? When I was watching the 2011 450 shootout film I thought I was watching Ping for a couple seconds until I saw the back of Wardy’s jersey. Dude, Jeff won the 1984 125 outdoor national championship. The man was in freaking On Any Sunday, and he can still grip it and rip it as good if not better than most local pros! The Scotsman owns a plethora of national championships, and is in my opinion one of the most underrated riders in history. He’s only 5’5" or something, but as Larry Huffman so brilliantly put it is "built like a piano!"

My first memory of Jeff Ward was at Ponca City, circa 1986. Kawasaki Team Green used to always bring out the new model machines and Ward would always come out to put on a demo. There used to be a wooden snow fence that ominously bordered the fifth-gear start stretch at Ponca. I was 10-years-old and had my tiny feet wedged between the wooden planks and balanced myself on the wire bindings. Here came Wardy down the grass start stretch. He was standing tall in his all white Sinisalo gear in a third-gear wheelie on a shiny new KX500. He had the same posture as he did in On Any Sunday with his head over the bars and the front wheel slightly cocked to the side. I can still hear the low howl of the mighty big bore and smell the freshness burning off the cylinder as he flew past me.

As Ward powered under the old tractor trailer walk over bridge I took off on a dead sprint across the infield to watch him navigate the far side of the track. It was at intermission after the "Ponca City Ambucs" had disked and watered the track and the corners were sketchy. Ward was still flying, straight legging it around the corners and throwing ‘taters from the sparkling spokes of his rear wheel. I was able to get my first top ten that time, which used to be a pretty big deal because you got your name in the program the following year. Jeff would stick around for awards presentation and I got my picture standing next to him with my trophy.

As evident by that video yesterday, Ward hasn’t strayed too far from the throttle throughout the years and seeing him ride was very nostalgic for me.

So, heading towards the weekend I’m still stoked even though it’s beginning to get frosty. I already have a stack of wood in my garage that I'm going to build on. The ground outside still hasn’t frozen yet so the track will be perfect for riding. I’m servicing my bike and throwing on a new rear tire to hopefully wear out Saturday and Sunday. I can’t wait to hit the dirt for the first couple laps and do a couple stand up wheelies in honor of Jeff Ward. I wish I had an open faced helmet and a "Jofa" face mask. I suppose my only set of white gear will suffice.

Thanks for reading. Happy Thanksgiving. 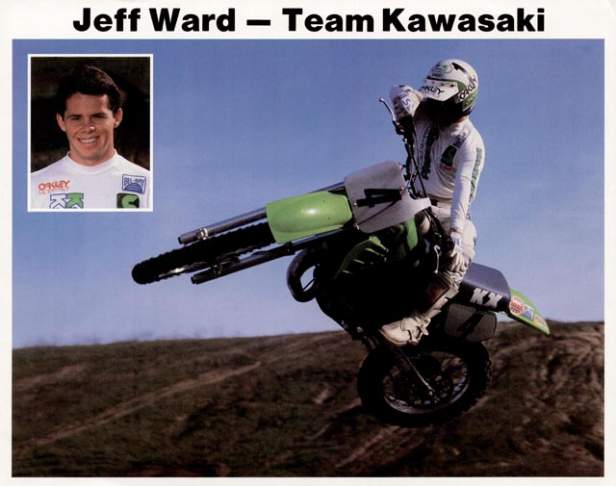