San Bernardino, Calif. - November 6, 2010 - Defending MTA World Vet Champion Doug "Doctor" Dubach put on a clinic in today's 40+ Vet races, taking both the holeshot and the win in each moto. This is Dubach's 18th World Vet title, and he will be back racing in the 30+ Pro races tomorrow for a shot at his 19th.

Dubach launched out of the gate in a hurry, and was closely pursued by Gordon Ward. "The first moto I had a great battle with Gordon," said Dubach. We were looking at each other and yelling back and forth, it was so much fun. We have to remind ourselves that we both have a day job after a day like this."

The second moto saw Dubach launch to another ferocious start." In the second moto, I was lucky enough to get a bit of a lead," said Dubach. "I'm not really sure what was going on behind me, but it sure feels good to win another one of these!"

Ron Lechien put in a solid effort in his first World Vet race since his return to racing, taking third in his first moto and fourth in the second for fourth overall in the 40+ Pro class.

With the first day of Pro class racing finished, Dubach is preparing to go up against the other pros tomorrow in the 30+ class, including last year's rival Ryan Hughes. "I can only celebrate today's victory for about ten minutes," said Dubach. "I have to start worrying about Ryan Hughes and tomorrow's races!" 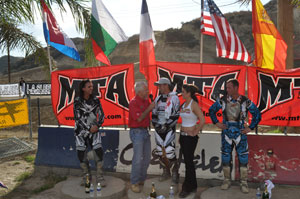 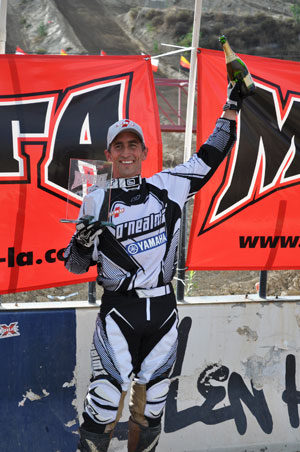