Los Angeles, CA - Upcoming at Bonhams Auction held in the prestigious Petersen Museum in Los Angeles Saturday Nov. 13th, there is something for the two wheeled aficionados in the form of bikes belonging to the late Marty Moates, winner of the 1980 USGP at Carlsbad. Also the latest state of the art 450cc road racer prototype, now the focus of the next generation of road racers in MotoGP in the form of Moto3. 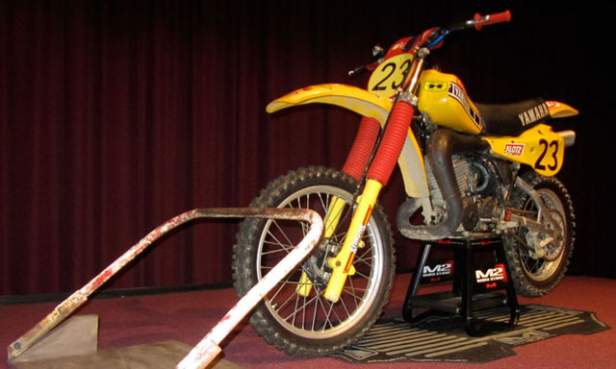 * Marty Moates Yamaha YZ465 is a faithful replica of Moates' LOP-sponsored USGP race bike, and was one of his prized possessions. Included in the sale is the actual Carlsbad starting gate from which Moates launched himself into history.

* Marty's YZ250 that he rode on the last official lap of Carlsbad before it was paved over.

* The rare WR 450 2-Trac, developed in conjunction with suspension specialists Ohlins, used a gearbox-driven hydraulic pump that fed high-pressure hoses running to the front hub, which contained a small hydraulic motor. When rear-wheel sensors detected a loss of traction, increasingly more power was fed to the front wheel. In effect, the bike was being pulled as well as pushed on loose, technical surfaces.

Yamaha tested the system in long-distance off-road rallies, including the grueling Paris-Dakar, and in 2004 offered WR450F 2-Tracs to the public for competition use. Expensive at over $20,000 and available only in limited series, the bikes were never marketed in the U.S.

Moates used his 2-Trac everywhere from MX courses to sand dunes to supermoto tracks. Included in the sale are three sets of wheels/tires-knobbies for off-road, paddles for sand and slicks for supermotard. Offered on a Bill of Sale.

* 2009 Husqvarna 450RR Road Racer. With the announcement that MotoGP will turn to single cylinder four stroke bikes in 2012, as proof of concept to replace the last of the two stroke road race bikes, Gavin Trippe joined with Troy Lee Designs and Roland Sands Designs to build several F-450 examples based off current 450cc Motocross bikes. The latest is this Husqvarna, ready to race, based on the company's limited-edition 450 SMRR as raced into silver medal position by World Champion Adrien Cheyere in the 2009 X-Games. It features a six-speed transmission, slipper clutch, twin titanium exhaust pipes and a standard electric starter. Included in the sale are road racing spare parts and the original supermotard components.

A movie about Marty's surprising win at Carlsbad has just been released, www.carlsbadusgpmovie.com.