Woodcliff Lake, NJ - Tough terrain is the hallmark of the aptly named Ironman Grand National Cross Country in Crawfordsville, Indiana, but Team Husqvarna riders were able to overcome the challenging conditions and poor starts in the 13th and final round of the 2010 GNCC series. Jason Thomas charged to his third win of the season, this time aboard a Husqvarna TXC250 in the XC2 class, while Glenn Kearney just missed putting his TE310 on the podium, finishing 4th in the premiere XC1 class. 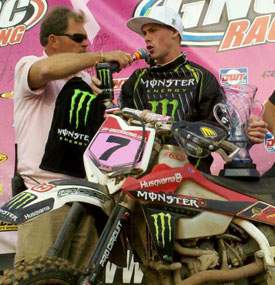 Although Thomas won the battle, he just missed winning the national championship war by one point to archrival Kailub Russell (313 to 312 points). "I did everything I could to win, but I sure didn't make it easy on myself," admits the Monster Energy FAR Husqvarna rider. "I was dead last off the start, but I rode smart and was able to work my way to the front." Easier said than done, though as drought-like conditions in Indiana made dust a real factor in this year's Ironman.

A mid-season switch from Yamaha to his new Husqvarna saw Thomas go on a tear, ultimately never finishing off the podium and winning three GNCC rounds this season. "We barely changed anything on the bike other than put my Renthal bars on it and a Pro Circuit pipe," says Thomas. Pro Circuit also revalved the forks and added a Power Commander ignition, but the engine remained bone stock.

The reason for the mid-season switch? "Team Fred Andrews Racing was looking for a manufacturer that wanted to help support us," explains team boss Fred Andrews. "Husqvarna is hungry to get back on top of the off-road market in the U.S. and Monster Energy FAR Husqvarna wants to help make this happen... plus the posted contingency is second to none," notes the veteran racer Andrews.

Jason Thomas won the battle at the Ironman GNCC finale, but missed the National Championship by one point.

Speaking of problems, Glenn Kearney also suffered a bad start in XC1, something you really didn't want to do in the dusty conditions, "I was about 10th going into the woods," recollects Team Husqvarna's Aussie export. Despite the dust, there were also some mud holes hidden in the woods... as Glenn found out the hard way! "It was tough to see being so far back, but we got to a muddy place and I thought I might be able to make some passes... I ended up crashing instead." Muddy gloves and dusty goggles didn’t deter his charge up through the pack. "I struggled a bit early on trying to get things sorted, but I started rolling pretty good after that." Kearney's fourth place finish in XC1 was good enough to cement sixth place over all for the season.

"Husqvarna is very proud of it woods racing heritage, and guys like Jason and Glenn are keeping this winning tradition alive," says new National Marketing Manager Corey Eastman. "Husqvarna's history in America has always been tied to racing - our newest products are designed and built with this in mind. A victory in the demanding XC2 class at the final GNCC of the season is just a glimpse of things to come from Husqvarna!" Closing out the GNCC season in fine fashion and just missing the national championship by one point is the first step toward the future, according to Corey.