Welcome to another edition of Where Are They Now, presented by Bob’s Cycle Supply. Today we’re checking in with Danny Carlson, a former top amateur and privateer from Southern California. We caught up with him in a pretty unexpected way.

Racer X: Danny, you responded via email to one of our Flash Trivia questions and we thought we’d return the favor and see what you are up to these days.
Danny Carlson: Thanks, nice to hear from you guys! Well, I’m now a married family man, a father, and work for a family-owned company called RJ Fabrications. We make stainless steel cabinets and benches for restaurants, kitchens, and industrial applications, and we manufacture everything here in Corona [California]. It’s pretty cool. I’m the director of sales, and we have been growing the company pretty quickly.

Do you guys make everything here in the States?
Yes, absolutely. That’s the one key thing: we are all about American manufacturing, and we're proud of the fact that we make and build our own products here in the USA. American manufacturing is rare. Basically, our products were really well known on the West Coast but we didn’t have much presence on the East Coast. I have been working to open up that area for the company, and so far, so good. We now have warehouses in Texas, Boston, and Seattle and have been growing sales.

Who are your primary customers?
Casinos and prisons are the biggest customers, but we’ve sold to everyone from doctor’s offices to race teams. In fact, the MDK team used our products when they were racing.

Let’s talk a little bit about your career. You came onto the scene as a youth racer and had quite a buzz around your program.
Yeah, I was a Honda factory 80cc racer. American Honda had not supported riders in the amateur scene for many years, but with sales growing, they came back into it in 1996 and sponsored me. At the time, I was doing a lot of magazine testing, and I was one of the riders chosen to represent them. They specifically wanted to promote their new CR85 expert model, which was like a big-wheel. I was technically a factory rider. It was funny—I basically started with them as a test rider for the bike, but as I got faster, they stayed with me and we went and did all the big amateur races. 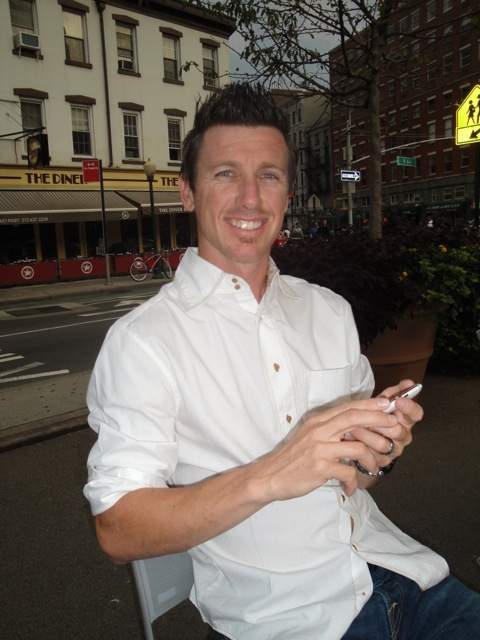 Danny Carlson
What was it like to be a factory Honda minibike rider?
That was really cool. We had a Honda box van and basically did all the big races. My parents were heavily involved, still, but we had a lot of the factory race team resources available to us. I was also out riding quite a bit with McGrath and Lamson, which was probably the coolest part of that, as it really helped my confidence. When it came time to race, I had some pretty good results and was always top-three. I was racing against Carmichael and Pastrana, and those guys had just a little bit more than me. But overall, I did pretty good as a kid.
When did you turn pro?
I started riding the nationals halfway through the 1998 season. I got picked up by Yamaha once I moved up to the big bikes but got hurt right away, which kind of messed me up for a while. In 1999, I raced a bunch of supercross races and was making the night shows and just kept trying to get better from there. I was riding at Yamaha along with Ernesto Fonseca. Ernesto was killing it, though.
How was the transition from amateur to pro?
It was really hard. I got hurt and then had some problems with my head and confidence. That always seemed to hold me back. After turning pro, it seemed like every time I would start feeling good and making main events, I would get hurt. I always raced the East Coast supercross events and always did better at those.
{LINKS}

You’re a SoCal kid who grew up in the McGrath supercross era, so that’s surprising. Why do you think that is?
I don’t know, I just liked the dirt back East and always did better there than the hard-packed West Coast tracks. I had a few top-ten finishes back East.

When did you decide to hang it up?
Well, as I mentioned, I had quite a few injuries, and every time I would come out and build up my speed, I would get hurt. I had a bunch of privateer rides, with good programs like F&S Suzuki and Jason McCormick’s Pro Caliber team. Then, in 2004 I put together my own little privateer program with Jason Ciarletta, and we were going to do the entire SX series. Back then, if you weren’t in top ten in the points, you could race both [regional] series. But then Jason crashed at San Diego, and we all know what happened—that basically made me take a step back from the whole thing. [Ed note: Ciarletta passed away following a practice crash at the 2004 San Diego Supercross.]
If I recall, weren't you related to him?
Yes, at the time I was engaged to his sister, Heather. We’re now married and have two kids, with a third on the way. I stepped back from it all after Jason’s crash and found my spirituality. I took some time off and later that year went and did some races in Brazil and Argentina in June of 2004. I then came back from those events and pretty much decided to call it a career. I never really accomplished what I thought I could do in the professional ranks, but still had an amazing time. One thing that I really enjoyed though was the magazine tests. Being in SoCal, I was always testing for magazines as the local pro rider. I’ve been lucky enough to be featured on something like ten or fifteen magazine covers over the years, which is pretty cool. 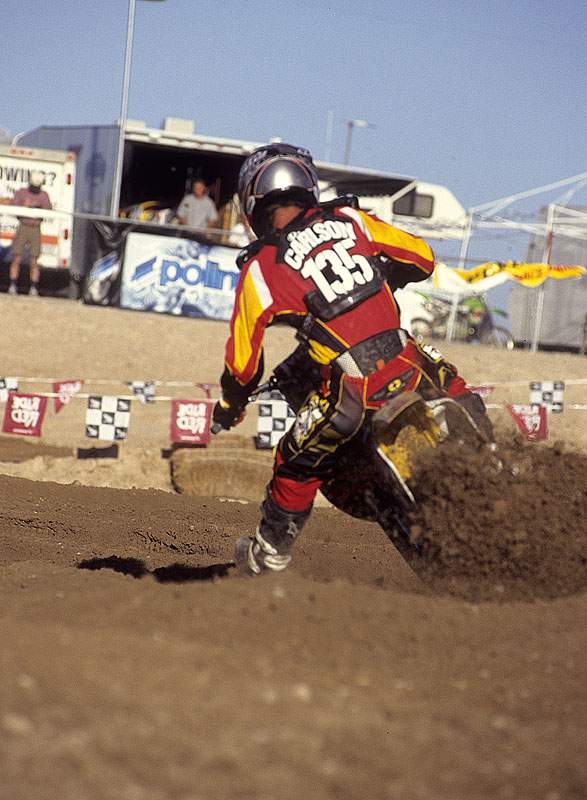 photo: DC
Do you still ride and follow things that are going on?
I still see bikes, trucks, and team vans all the time going down the freeway, but I don’t always know who they are anymore. I used to know everyone’s number, but now, not as much. The other day I was at lunch at Miguel’s in Corona and Mitch [Payton] was there with a bunch of people, but I don’t know if they remember me anymore. But it’s cool, I still follow it closely and am always looking at Racer X’s website for the latest news [laughs]. Also, I didn’t ride for a few years there, but in 2007 I went out and bought a bike. When it rains, I usually go out and ride in the hills and relive some of the glory days. Outside of that, I mostly golf and drive go-karts at Pole Position raceway. Oh, and last year I did race the 4-Stroke National at Glen Helen for fun. Doing the thirty minutes was a feat in and of itself, but it was fun.
What are your kids’ names?
We have a girl, Taytum, who is 3, and a 1-year-old son named Tanner. Also, we are expecting another one in January, but we don’t know if it’s a boy or a girl.
It sounds like you’re doing well and have made a pretty good life and career outside of racing.
Thanks for checking in. One more thing: I just want to thank my parents for sticking by me all those years. Racing is really tough and we made a lot of sacrifices for a number of years, and they always stuck by me. For that, I cannot say enough!
Wondering where a certain former racer is? Or do you know a retired rider who has a good story to tell? Drop us a line at letters@racerxonline.com. 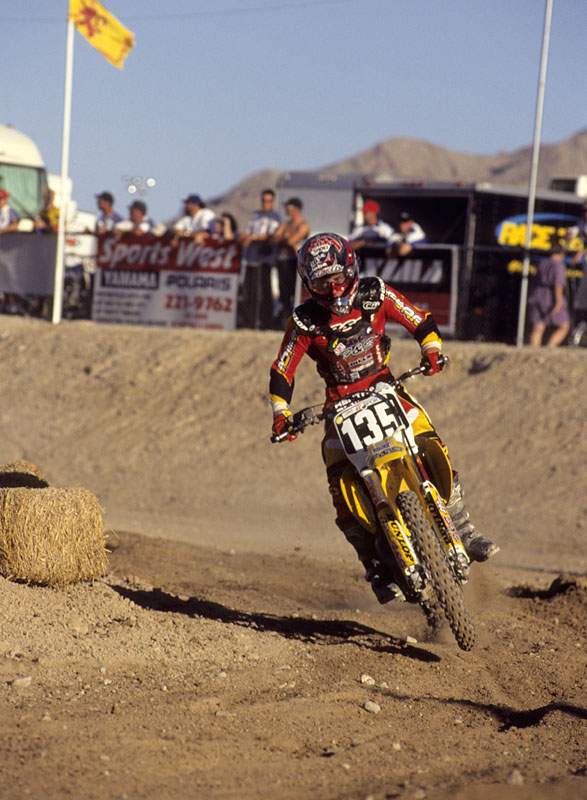