CORONA, Calif. – Continuing its tradition of signing some of motocross' top rising talent, the owners of the powerful GEICO Powersports Honda team announced it will be bringing 15-year-old Justin Bogle into the fold in 2011. 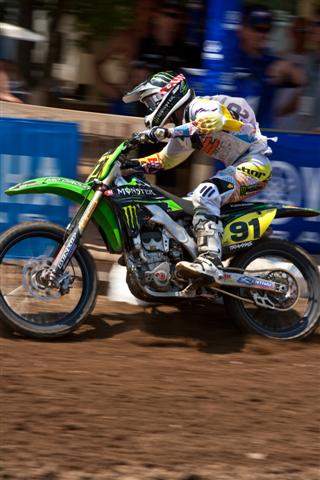 "Getting the opportunity to ride for the GEICO Powersports Honda team is amazing," Bogle said. "It's been something I've been working really hard for, so when I got the call I was really stoked.

"I'm still going to focus on some amateur stuff first; after that I can't wait to go pro."

Bogle, who has been tearing up the amateur ranks, will turn pro next summer and possibly ride in a select number of outdoor motocross events in 2011.

"To me, Justin shows all the signs of being the next Trey Canard, the next Justin Barcia, the next Eli Tomac or Blake Wharton," Zielfelder said. "He's had almost identical results at the top levels of amateur riding and he comes across as very motivated and focused to succeed at the top level of racing. There's a great support group for him. He's really the complete package."

Bogle, an Oklahoma native, knows and sometimes trains with fellow Okie Canard, so he said he was familiar with the GEICO Powersports Honda operation.

"I ride at Trey's house and I spoke with him before I signed the deal," Bogle said. "He's a good dude to talk to about stuff like that. He gave me a lot of great advice."

Zielfelder said the young rider brings an impressive amateur resume to the team.

"At the Loretta's (the Loretta Lynn Amateur National Motocross Championships) this year he was a perfect six-for-six in the motos he rode," Zielfelder said. "No one else did that at the event, which is unquestionably the toughest amateur race in the world. You can only enter two classes there and he swept them both.

"We plan to continue his development in the amateur ranks through the 2011 Loretta's and then make the determination then about bringing him up for the final few motocross events."

The GEICO Powersports Honda team next takes to the track on Jan. 8, 2011, in Anaheim, Calif. with the season opener of the Monster Energy AMA Supercross series.