Sun Valley, ID — SCOTT Sports is pleased to announce that Trey Canard has signed to wear SCOTT goggles and eyewear for the 2011 and 2012 race seasons.  Trey will race in the highly anticipated, Hustle Goggle equipped with the SCOTT Fit System.

"I couldn’t be happier to have Trey back on the team.  SCOTT supported Trey while he raced as an amateur and now as professional; Trey has proven he knows what it takes to be a champion," said Kevin Strikwerda, US MX Marketing for SCOTT Sports. "SCOTT has a credible history of supporting the sports best and is looking forward to Trey’s rookie season in the 450 class."

2010 was undoubtedly Trey’s most successful season to date.  He placed 3rd overall in the AMA Supercross West Lites series – and had a successful stint in the 450 class with five podium finishes as a replacement rider on the Honda Red Bull Racing team.  Canard is also the reigning AMA Motocross Lites Champion - turning in five overall wins, and nine podium finishes en route to a comeback victory secured during the final round at Pala Raceway.  In September, Canard was a member of 2010 Motocross of Nations Championship team representing the USA. 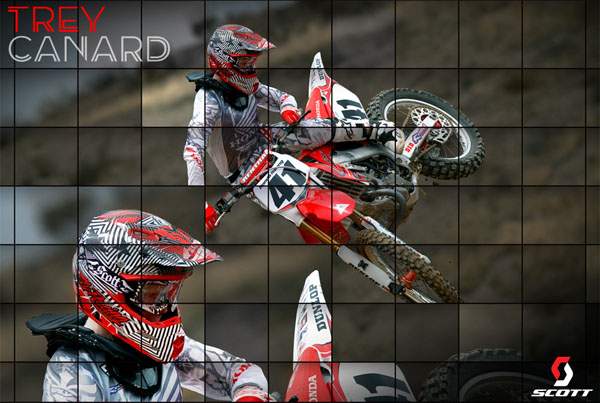 "SCOTT was my first sponsor.  To be back with them is awesome.  The goggles and company are both one of a kind and I’m very excited to be part of it all," said Trey Canard.

Trey Canard will make his debut in the 450 Supercross class on January 9th in Anaheim, California.